We are half way through Nestlé-Free Week. Boycott supporters have been sharing information about how Nestlé pushes baby milk and encouraging family and friends to dump Nestlé products, at least for a week. Hundreds of thousand of people have seen posts on Facebook, Twitter and elsewhere.

Anyone who has seen Nestlé’s presentations to investors knows that making money is the primary concern of executives. Which should be obvious, but some people seem to believe Nestlé’s public relations campaigns claiming it is ‘creating shared value‘ and should be trusted to do the right thing instead of regulated.

Executives balance the financial gain from marketing strategies against how bad they look when they are exposed. So the more we can expose them, the better. At the same time we work with our partners in the International Baby Food Action Network (IBFAN) for laws.

In one of them, India, Nestlé executives have been issued with a court summons this week for not labelling infant formula as required by the law. Regardless of the outcome of the criminal prosecution, the products were seized and removed from the market in 2012.

However, we have also learned this week that in Indonesia Nestlé executives are attempting to persuade the authorities to approve its strategies targeting midwives, community centres and even children in school. Nestlé wants to gain this access under the guise of providing nutrition education. Can you imagine anything more absurd than a company that misleads mothers and health workers on infant feeding and markets high sugar, high salt foods at children being given this role?

Nestlé simply cannot be trusted to provide accurate information, as the case we won this month in the UK condemning its false advertising for SMA toddler milk proves. (Left, the promotional email sent to members of the ASDA (Walmart) Baby and Toddler Club).

Today it is being reported that the Federal Trade Commission in the United States is suing Nestlé over allergy claims made for its Gerber formula. See: FTC accuses Gerber of false claim on baby formula.

Nestlé plays fast and lose with the truth to shift product. It employs Nutrition Representatives whose main responsibility according to company documents is to ‘Stimulate retail sales through the promotion of infant formulas and cereals to gain Healthcare Professionals recommendations’.

It is not just marketing that is a concern. Last week Corporate Crime Reporter ran an interview with the former Nestlé Vice President for Food Safety who is blowing the whistle on negligence with infant formula and other baby foods. When she raised concerns internally she was sidelined and eventually forced from her job. She is suing. One of the cases she relates is when infant formula in China was found to contain excess iodine. I recall this case from 2005 and China Daily saying. ‘Many believe it reacted with the speed and alacrity of a sailor drunk on shore leave’. Now we know from the whistle blower that this was due to systemic failures in the company.

The new feature film Tigers dramatises the story of another whistle blower, a former Nestlé baby milk salesman in Pakistan called Syed Aamir Raza who decided to take on the company with the help of IBFAN. It shows something of the methods used to target health workers and the reality of taking on a corporation as powerful as Nestlé. Amir decided to act, a great personal cost, after a baby died at a hospital on his circuit and the doctor attending said it was due to ‘people like you’. 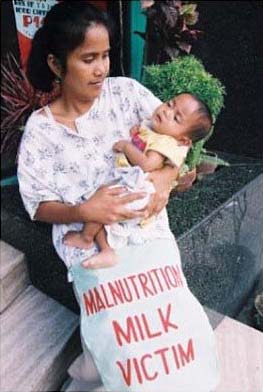 During Nestlé-Free Week some people new to the campaign have questioned whether it is true that babies fed on formula are more likely to become sick than breastfed babies. The report Preventing Disease and Saving Resources from UNICEF UK quantifies the extra illness in babies who are fed on formula – and expense to the National Health Service (NHS) – in an industrialised and wealthy country: ‘…moderate increases in breastfeeding would translate into cost savings for the NHS of £40 million and tens of thousands of fewer hospital admissions and GP consultations.’

In conditions of poverty, the greater risk of sickness too often leads to death. A report from the World Health Organisation on the progress in implementing the International Code of Marketing of Breastmilk Substitutes suggests ‘breastfeeding has the potential to prevent about 800 000 deaths among children under five each year.’

Left: Gloria campaigns with her son Miguel to defend regulations in the Philippines in 2007 after being misled by company promotion. That campaign was successful, but now Nestlé is trying again to weaken them.

The International Code, adopted by the United Nations World Health Assembly along with other Resolutions on marketing baby foods, does not prevent companies from selling formula. It is there to ensure that all mothers receive accurate information, whether they are breastfeeding or using formula.

Nestlé promoting its formula with the claim it ‘protects’ babies and is the ‘gentle start’ is not providing accurate information and violates Article 9 of the Code. Nestlé tells investors such claims are ‘engines for growth’, which is why we need the boycott to put a financial cost on malpractice. Remember to tell Nestlé you are boycotting – and continue to spread the word during Nestlé-Free Week and beyond.