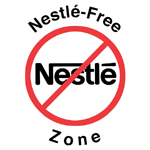 International Nestlé-Free Week is a time for people who boycott Nestlé over the way it pushes baby milk to do more to promote the boycott – and for those who don’t boycott to give it a go.

Nestlé is the target of a boycott because it aggressively markets baby milk in ways that undermine breastfeeding and break international marketing rules. Babies who are fed on formula are more likely to become sick than breastfed babies and, in conditions of poverty, more likely to die. Despite this, Nestle promotes its formula around the world with the claim it ‘protects’ babies and is the ‘gentle start’. It also misleads mothers who use formula and does not provide the information they require to reduce the risks of formula feeding. Further details below.

There are other reasons to boycott Nestlé, such as concern over its exploitation of water resources (see Council of Canadians boycott call), treatment of dairy and coffee farmers, accusations of child slavery and labour in its cocoa supply chain and other issues (see report to the UN Global Compact office, 2009).

Action you can take

Download the Buycott smartphone app to scan product barcodes to see if they are owned by Nestlé.

You can continue with the following three actions to encourage Nestlé to bring its practices into line with international marketing rules:

Also sign up to find out when the forthcoming feature film Tigers will be screening near you. This is the outstanding new film from Oscar-winning Director, Danis Tanovic, based on the true story of former Nestle Pakistan salesman taking on the baby milk industry with the help of IBFAN

The boycott will continue until Nestlé abides by the internationally agreed marketing standards. It does force changes.

Nestlé changed its statement of support for breastfeeding in its response to boycotters during Nestlé-Free Week 2015 to bring it into line with WHO recommendations – but continues to undermine breastfeeding in the way it pushes its own products. http://www.babymilkaction.org/archives/7547

During Nestlé-Free Week in 2013, we highlighted Nestlé promoting formula with the claim it is the ‘natural start’ for babies. On 14 October 2014, just before Nestlé-Free Week 2014, Nestlé wrote to us to say, ‘We will discontinue the use of the “Natural Start” logo on our infant formula products by mid-2015.’

We will be checking. Nestlé repeatedly defended this outrageous claim, but we kept up the pressure. However, Nestlé continues to claim its formula ‘protects’ babies and provides a ‘gentle start’.

Our sheet on Nestlé’s labels will help you expose what Nestlé is doing – click here to download. 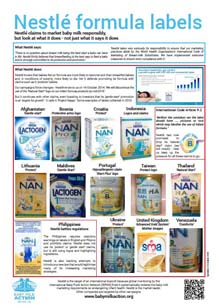 You can find examples of other ways Nestlé targets pregnant women, parents and health workers in the Breaking the Rules: In Brief 2014 monitoring report. This includes information on other companies as well.

Other resources are given below, such as Nestlé-Free Zone poster to display in your home, office or window. This may be particularly useful to put in your window if Halloween is marked in your country.

Nestlé’s has repeatedly rejected Baby Milk Action’s four-point plan for saving infant lives and ultimately ending the boycott. At the shareholder meeting on 10 April 2014 he again insisted Nestlé would not change its marketing practices. As well as continuing to violate the baby milk marketing requirements, Nestlé is currently pushing for a new law in the Philippines to replace the regulations introduced to protect babies, mothers and their families.

Spread the word during International Nestlé-Free Week. Share links to our pages. Post messages to discussion groups. Write to the media. There is a short explanation of the boycott below.

The main target of the boycott is Nescafé coffee. If you only boycott Nescafé, try giving all Nestlé products a miss for this week. If you don’t boycott because you don’t want to miss out on a Nestlé brand, try it for this week. In some countries 31 October is marked as Halloween when sweets/candies are given to children – this provides a great opportunity to explain why you won’t be buying Nestlé confectionery.

Campaigners in the United States launched Nestlé-Free Candy Wrappers for the 2010 week. To download the file to print on labels to put on non-Nestlé confectionery – click here.

Download and print this Nestlé-Free Zone poster to display in your window – click here for the pdf file.

You can also use hand out our credit-card sized cards which lists the main brands and explains the basics of the campaign. Click here.

Our leaflet explaining why to boycott Nestlé Fairtrade KitKat contains a useful summary of the baby milk and child slavery/labour issues – click here.

Campaigners in other countries have put up lists more specifically for their countries, such as Canada, New Zealand and the United States (Boo Nestlé and Kelly Naturally).

Be Nestlé-Free and spread the word

You will find sources of information, Nestlé-Free logos for blogs and lots more in our year-round Nestlé-Free Zone. – because the boycott is not just for one week, it’s until Nestlé accepts and delivers on our four-point plan for saving infant lives.

The reason for having a special week is to make it easier for you to tell people why you are boycotting:

Nestlé pushes baby milk around the world using strategies that are prohibited by international marketing standards. It also refuses to warn of risks from formula and how to reduce them. Nestlé knows that babies fed on formula are more likely to become sick than breastfed babies and, in conditions of poverty, more likely to die. It puts its own profits before health. The boycott gives it a financial reason to think again and helps force changes. Please join the Nestlé boycott – even if only for this week.

According to the World Health Organisation, improving breastfeeding rates could save 800,000 lives around the world every year

Tell Nestlé you are boycotting – it makes a difference

Don’t forget to tell Nestlé you are boycotting – click here for our ‘Email Nestlé’ page. If you have already emailed Nestlé, please do so again as we are highlighting violations that have just been reported to us at the moment.

Nestlé also refuses to warn that powdered formula is not sterile and the simple steps to reduce the risks of possible contamination with harmful bacteria, such as Enterobacter Sakazakii and Salmonella. Instead, it promotes its formula with health and nutrition claims, such as colourful logos saying its formula ‘protects’.