U.S. Opposition to Breast-Feeding Resolution Stuns World Health Officials  followed by a Tweet by President Trump that this was all ‘fake news’. 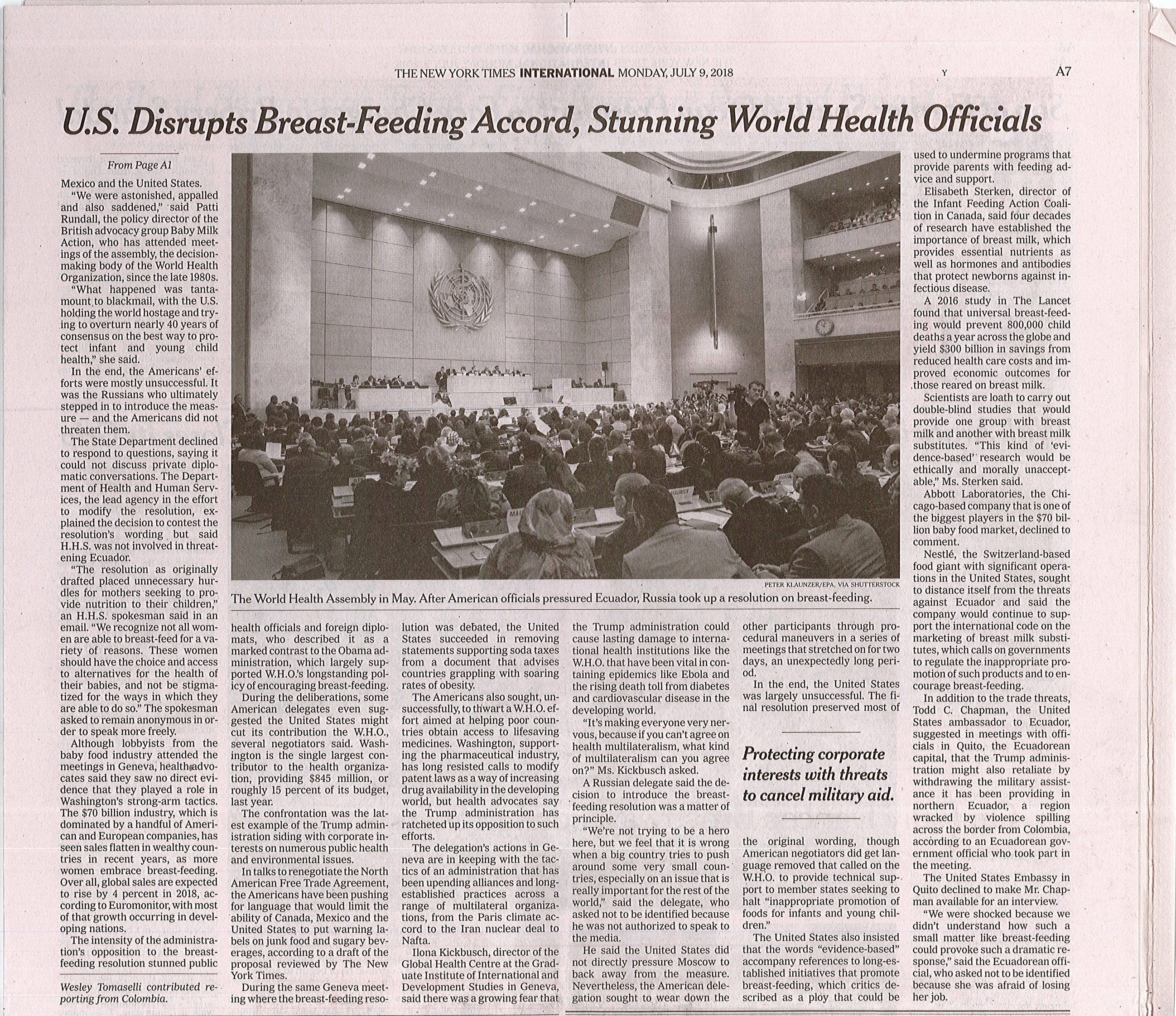 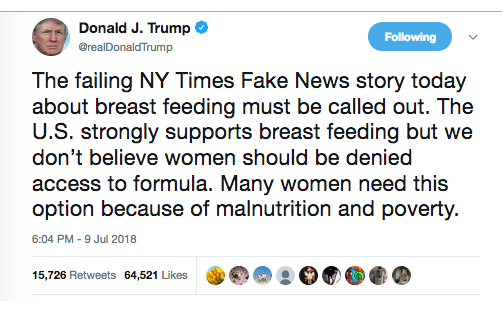 There has been global media coverage (Click here for some of the US coverage) about what happened at the 71st World Health Assembly in May.  Some of the coverage has become sidetracked into a debate about whether women should or should not breastfeed their babies.   Below are our thoughts on why this misses the point.
President Trump does seem to have a real dislike of breastfeeding, however the controversy is NOT really about breastfeeding – or about infant formula, which is a legitimate and necessary product for babies who are not breastfed. The debate at this time is about the trade of  ‘follow-on’ or ‘toddler’ formulas,  unnecessary products that target babies 6 -36 months and are aggressively and misleadingly promoted. These products are fuelling global formula sales (set to rise to $70bn by 2019) and exacerbating the obesity epidemic – while undermining breastfeeding  –  a lifeline for so many children and undermining the health safeguards that exist in many countries.
Unless there is a radical change of policy, the US has no intention of bringing in laws to control baby food marketing at home –  it never has.  This tactic of threatening less powerful countries has much more to do the corporate need to trade highly processed products globally with minimal restrictions  – forcing developing countries to welcome these products as somehow better than their own, and to abandon their traditional food cultures.
Why are WHA Resolutions important?:  Since 1981 (when the International Code of Marketing of Breastmilk Substitutes was adopted) the World Health Assembly has debated infant and young child feeding every two years and adopted 17 or so new Resolutions.  Click Here   The Assemblies and the Resolutions are important: they help Governments share their concerns and ensure that their regulations and policies keep pace with the new marketing tactics.
The  original draft Resolution that Ecuador planned to sponsor aimed to safeguard 5 critical areas – the Baby-friendly Hospital Initiative (BFHI), the implementation and monitoring of Code and relevant WHA resolutions,  the WHO Guidance on ending the Inappropriate Marketing of Foods for Infants and Young Children that had been adopted in 2016,  appropriate infant and young child feeding in emergencies and conflicts of interest in nutrition programmes.
What happened in May? Led by Ecuador, Member States had four meetings before the Assembly and arrived at a draft consensus text  by the 14th May along with a Rationale.  On the first day of the Assembly, it was clear that Ecuador was not able to sponsor the Resolution – some of us knew that this was because of US pressure  – others guessed.  Another country had to be found and quickly  to meet WHA rules and none of the original sponsors were prepared to  take the risk of US sanctions.  The  Russian Federation saved the day and agreed to table the text as a Draft Resolution with Botswana, Canada, Gambia, Georgia, Ghana, Mozambique, Nepal, Pakistan, Panama, Senegal, Sierra Leone, Thailand and Zambia as co-sponsors. (A71/A/CONF/4)

The same day, the USA proposed a single page Draft Decision (A71/A/CONF./5) This  focused on promotion of breastfeeding with no mention of the need for protection from harmful marketing.  Instead of ignoring the US proposal and if necessary calling for a vote on the Russia draft, Italy proposed a drafting committee.  From then on the only way was downhill.   Chaired by Thailand, two days of drafting followed with a large US delegation dominating the proceedings. IBFANers and other NGOs are not allowed to enter the drafting room but did their best to help Member States preserve as many safeguards as possible.

What was the outcome?  The re-drafted resolution that was eventually adopted (A71/A/CONF./4 REV. 1) did retain some of the original safeguards – largely because of the insistence of developing country delegates  – however  it is substantially weaker than the original text, contains very little about marketing and, not only that, it includes subtle flaws that could cause serious problems in the coming months when key decisions are taken at the global food standards setting body Codex Alimentarius Commission. (CLICK HERE for an explanation of what Codex is and why its important.)

Why did the US do this and why is it so worrying?

What happened at the Assembly is exactly what the US has been doing for years at Codex,  only this time in a more extreme way: CLICK HERE for our report of the meeting in Berlin in December 2017 and CLICK HERE for the Codex meeting in Rome last week. Since the arrival of President Trump the US position has moved on from lowering standards and the scientific evidence base point by point, to calling for the wholesale removal or re-evaluation of previous WHA Resolutions and recommendations from Codex texts: effectively removing essential safeguards that IBFAN, WHO and our partners have helped incorporate into the infant and young child feeding products standards over the last 20 years.  This is why health advocates are so worried.  As Ted McKinney, US -Under Secretary of State for Trade and Foreign Agricultural Affairs US, argued last week, national and regional concerns – whether products are safely and appropriately used – are not the ‘purview’ of Codex. What matters more to the US is that the corporations find the standards useful.

Why are the follow up and so called “Growing-up” formulas so problematic?

Follow-up formulas were invented for one reason –  to get round laws that – because of industry pressure – often only  cover products for babies up to 6 months.  The WHO guidance adopted in 2016 makes it clear that all formulas targeting babies 0-36 months function as breastmilk substitutes and that national controls should include controls on on their marketing. WHO recommends exclusive  breastfeeding for 6 months and continued breastfeeding alongside other foods for two years or more – however long the mother and baby dyad want.

Here are some examples of the misleading promotion that is being used to persuade governments to allow these products to be marketed. 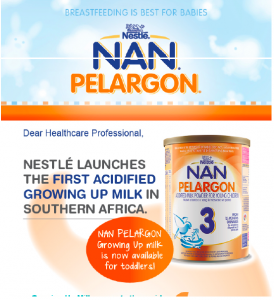 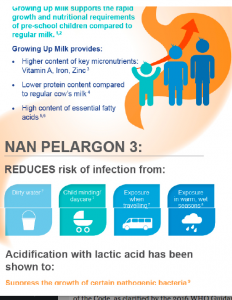 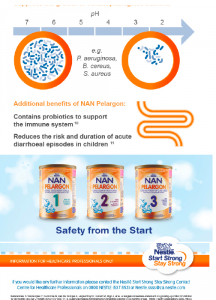 This advert for health workers picked up in Botswana in 2016  shows Nestlé’s launch of its “growing up milk’  in Southern Africa. The brochure makes unsubstantiated and misleading claims, using bogus science,  that the formula will protect children from dirty water, exposure when travelling etc.  Nothing could be further from the truth. If a mothers stops breastfeeding her child to use these products, the risks to health will be greatly increased.

TV Adverts.  Here are some links to TV commercials for #3 milks in Hong Kong showing cross promotion. Growing up milks are products within the scope of the Code, as clarified by the 2016 WHO Guidance. The packaging of  #1 and #2 milks is very similar. By advertising #3 milk, they are at the same time exploiting a “loophole” to also advertise/promote #2 and #1, as packaging is almost identical. However, as clarified by the Guidance, even promoting #3 is a violation.

See whole line of products (including #1 and #2 milks) here:

See whole line of products (including #1 and #2 milks) here: https://www.illuma.com.hk/product/tc/

Compilation of other reports by Mary Champney, HKI:

Key messages from the Save “Don’t Push It” report: general stats on global breastfeeding situation

ARCH numbers (from our 2016 supplement in MCN): illustrative stats on availability and promotion

Alison Stuebe’s blog on NYT story for Academy of Breastfeeding medicine: background info on US dairy interests and rise of GUM

Despite these efforts (and the associated obesity epidemic), we still have too much milk. In 2016, the Wall Street Journal reported that America’s dairy farmers dumped 43 million gallons of excess milk. When there’s not a market for fresh milk, it’s stored in other forms. Last week, it was reported that US cheese reserves are at their highest in a century, with 1.39 billion pounds in warehouses. As the director of market intelligence at the American Farm Bureau Federation told the Washington Post, “We’re producing more milk. It’s inevitable. That milk needs to get turned into something storable.”

What’s the fastest growing “something storable” in 2018? Baby formula – and in particular, a product called toddler milk. This product has been dubbed “The Hello Kitty of Packaged Food” for its runaway success in Asian markets. According to the European Food Safety Authority, these products offer no additional value to a balanced diet, and many are sweetened with sugar or corn syrup, potentially contributing to the global obesity epidemic. Toddler milk sales are expected to grow by 20% in developed countries from 2015 to 2020; in 2014, these milks comprised 39% of the baby milk retail market worldwide.

(CLICK HERE. for our Press Release describing what happened at the December Codex meeting,  HERE for another blog on John Bolton’s appointment and HERE for the 1978 Kennedy Hearings).