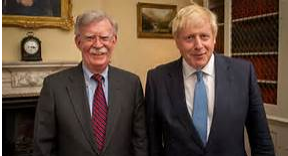 “…Bolton “screamed that I was fired” when she refused to lobby for a weakening of restrictions on the sale of infant formula in the developing world… ”  Lynne Finney, former legal adviser to the U.S. Agency, 1982

John Bolton, President Trump’s national security adviser is now in the UK supporting a no-deal Brexit.  For those of us who have followed the US position on baby food marketing since the 1970s,  Bolton is certainly one to fear when it comes to food standards. (Policy blogs: No Deal Boris Johnson’s selective amnesia)

The article below from 2005 explains his role in the US opposition to the International Code of Marketing of Breastmilk Substitutes in the early 1980s.

WASHINGTON … Democrats in Congress released a letter from a woman saying she was verbally abused by Bolton more than 20 years ago … Lynne Finney, a former legal adviser to the U.S. Agency … wrote that Bolton “screamed that I was fired” when she refused to lobby for a weakening of restrictions on the sale of infant formula in the developing world. …  the incident took place in late 1982 or early 1983, when Bolton, as the top lawyer at USAID, outranked Finney.

… Finney wrote that Bolton approached her because she was a member of the U.S. delegation to the governing council of the U.N. Development Program. “He said he understood that I had established good working relationships with delegates from other countries,” she wrote. “He wanted me to convince those delegates to weaken the U.N. code restricting marketing and promotion of infant formula in developing countries.”

Finney said she refused, citing studies showing that use of formula was killing babies in the developing world because it was overly diluted or mixed with dirty water.

Bolton “shouted that Nestlé (a maker of formula) was an important company and that he was giving me a direct order from President Reagan,” she wrote. When she still refused, “he screamed that I was fired.”

Here is a 2018 New York Times article:  “Mr. Bolton, in particular, believes the United States can do what it wants without regard to international law, treaties or the political commitments of previous administrations.”