CLICK HERE for press release on the Codex Nutrition meeting in Germany, December 2017

See Consultation Page for our latest submission on the proposed structure for a revised Follow-up Formula Standard.

The 41st meeting of the  WHO/FAO Codex Alimentarius Commission (CAC) – the UN body that sets standards for the global trade of foods and commodities – met in Rome  from 2-6th July. The mandate of Codex is ostensibly to protect consumer health and facilitate fair trade practices, however, these aims are continually threatened  by the commercial and political interests of producer countries, and the Conflict of Interest rules that do not safeguard these aims effectively.

The meeting kicked off with speeches from WHO and from Ted McKinney, US -Under Secretary of State for Trade and Foreign Agricultural Affairs (see weblink –  archives, Session 1: 23 minutes in). 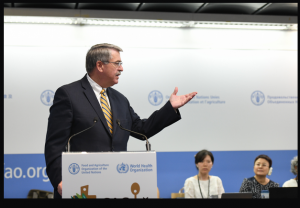 After stressing how much he loved Codex,  the importance of ‘science’ and sticking to the  ‘rules’, McKinney said that Codex was at a crossroads and needed to keep itself relevant for its ‘customers’ (the corporations). He feared they would ignore Codex if the standards were affected by  political,  national/regional concerns, concerns that – although important – are not in the purview of Codex.  The speech is worth deconstructing. While one hot topic was  the overuse of anti-biotics in livestock,  the US approach is affecting many other global health issues.  Are the problems that women face when bottle-feeding in poor resourced areas a ‘regional’ concern I wonder? Does the US refererence to ‘science’  mean independently funded science?

Like all observers (the vast majority are industry front groups) we speak only after Member States – so its often difficult to affect the course of the debate.  Nevertheless,  IBFAN made several   interventions, some of which, when it came to the report writing on the last day,  the US tried  to have deleted or weakened. We also made interventions at several side events.  Below are the paragraphs and some others that made it into the report.

Para 11: (At the end of the debate about science and residue limits for zilpaterol hydrochloride – CLICK HERE for an article explaining the importance of WHO’s work on this issue.) Observers expressed several views, including that there were scientific reasons to hold back the standard, Codex needed to update its procedures to avoid being left behind, better address sustainable and culturally appropriate foods and innovative products, ensure scientific credibility, avoid perceived conflicts of interest, favour independently funded science and use consistent terminology. Consistency across committees based on sound science and clear procedures was key to the credibility of Codex.

Para 61: (During the adoption of texts at Step 5, specifically the Review of the Standard for Follow-up Formula (CXS 156-1987): essential composition requirements for older infants and young children). An observer opposed adoption at Step 5 before agreement on the preamble and labelling sections; expressed the views that the commodity was not necessary and may pose a risk to the health of young children, undermine breastfeeding and fuel the obesity crisis, especially in the light of the aggressive marketing of such products; and noted that in their view further consideration should be given to the scientific basis of and inconsistent language in the Standard.

Para 99  (During the discussion on expidating Codex work)  The Commission noted the following views: (vii) clarification was needed on whether internal EWG (Electronic Working Group) documents could be summarized and shared publicly by observers in order to consult with their constituents; and (viii) accelerating procedures may inadvertently reduce opportunities for public engagement. (NB: on our request the word ‘stakeholder’ was changed to ‘constitutents’)

Para 110: (During the Regular review of Codex Work managment)  An observer called for good practice guidance regarding the lack of transparency in CCNFSDU (Codex Committee of Nutrition and foods for Special Dietary Uses) where recording was forbidden and the private sector at times spoke for governments. In her view, guidance was needed on the appropriateness of Codex dealing with products such as ready-to-use therapeutic food not intended for general sale.

Para 137 (Matters arising from WHO FAO – IBFAN expressed alarm that one country should seek to prevent any mention of the widespread concern in the room about the risks of harmful foods.  We said that  a strong message from CAC could have global impact.) Members recognized the FAO and WHO work in providing guidance to promote healthy diets and address obesity and diet related non communicable diseases, considering the problems facing various countries due to unhealthy diets high in sodium, sugars and fats, including transfats. Members also noted the importance of the conclusions of the Second International Conference on Nutrition and the United Nations Decade of Action on Nutrition 2016-2025

Experiences and lessons in facilitating safe trade05/07/2018 A side session on global funding for food safety initiatives WEBCAST. (Move to 45 minutes for my comment about the risks of Public Private Partnerships. The response by Melvin Spriej of the STDF, is at 52.30. He admits that PPPs with multinational companies is a grey area but still asks people to send in  positive examples (not examples of risks). 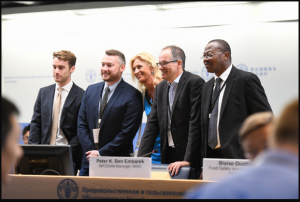 WHO INFOSAN staff and Panel

WEBCAST. My question is at 40.49 – calling on more countries to follow WHO recommendations on the need to alert carers to intrinsic contamination and the need for reconstituting powdered formulas at 70 degrees. The way that companies are pushing probiotics (that die at 40 degrees) and undermining public health messages. 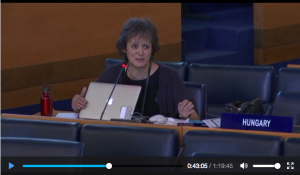 Patti Rundall, IBFAN, Asking a question about labelling of formulas to warning of intrinsic contamination.

This side event gave an overview of INFOSAN by discussing two recent and significant global food safety emergencies during which INFOSAN was instrumental in coordinating the rapid exchange of information between members around the world: the large and protracted outbreak of Listeriosis in South Africa linked to ready-to-eat meat, and the outbreak of Salmonella agona infections in France linked to globally distributed food products for infants. Both of these events highlight the application of several key codex standards and guidelines and illustrate the importance of their adoption and adaptation in order to prevent foodborne illness.  HASHTAG #CodexCAC41