Camille Selleger of Swiss group IBFAN-GIFA told shareholders about the new feature film Tigers and called on Nestlé to abide by marketing rules. The following text is the official translation of the response from Nestlé Chairman Peter Brabeck-Letmathé and Chief Executive Paul Bulcke, who spoke in French. The Head of Nestlé Nutrition, Heiko Schipper, spoke in English.

Their responses reveal how Nestlé misleads its shareholders to excuse its ongoing violations of United Nations marketing rules (see comments).

[click here for the full text of Camille’s intervention]

Mr Bulcke, earlier on you spoke about respect. My question is a very simple one indeed. When is Nestlé going to put its money where its mouth is and adhere to the International Code [of Marketing of Breastmilk Substitutes] instead of just paying lip service to it.

Thank you very much Ms Selleger. I think what we are going to try and do is to see if we can convince you by calling on another speaker to try to explain what we’re about. So we are going to ask Mr Schipper, who’s in charge of nutrition, and he’s a newcomer. He has a lot of energy and perhaps he will be more successful than we have been Heiko to convince Ms Selleger.

Thank you Mr Brabeck and thank you for the question, Ms Selleger.

First I would like to start to talk about our Nestlé Nutrition business. Nestlé Nutrition is, our mission is to nurture a healthier generation and we do this by focussing on the first 1000 days of life. Both through our products that are safe and science based. [Baby Milk Action comment: In a presentation to investors in September 2013, Mr Schipper highlighted the ‘product solutions it promotes during the first 1000 days – including follow-on milks and toddler milks, which the World Health Organisations says are ‘unnecessary’]. 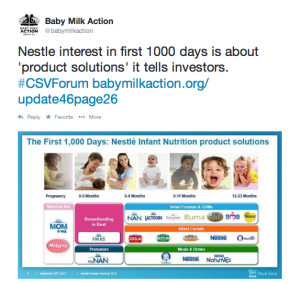 We also, as part of our commitment to the first 1000 days support breastfeeding. And this you can see through our very favourable policies towards employees who are in the maternal phase. For example, we have favourable policies when it comes to maternity leave and we also have breastfeeding rooms in 192 places around the world in order to facilitate breastfeeding while people are back at work. [Baby Milk Action comment: Nestlé also targets staff with its formula. In the UK, for example, Nestlé targeted staff at its own Gatwick HQ with the formula-branded SMA Nutrition Careline Team in 2014].

And, interestingly, last year, which I am sure you have also seen, we have had a tremendous success in India by having an active campaign promoting breastfeeding, reaching 2 million mothers, with very favourable comments. In fact, it is one of the most awarded campaign in India. And this is the MARKET where there are 27 million babies [emphasis added].

[Baby Milk Action comment: India has strong laws – Nestlé had products seized for breaking labelling laws in 2012 and in 2015 was denounced for targeting nurses in breach of the prohibitions on sponsorship (not for the first time). As advertising of formula is banned, Nestlé promoted its Nestlé Nutrition slogan, Start Healthy, Stay Healthy through the viral video campaign referred to by Mr Schipper]. 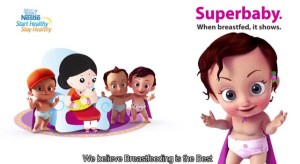 We also market our breastmilk substitutes responsibly in line with OUR commitments to the WHO Code [emphasis added]. I think you are also familiar that our policy is the strictest in the industry.

[Baby Milk Action comment: Nestlé refers to its own policies, whereas it should ensure its activities at every level comply with the International Code of Marketing of Breastmilk Substitutes and subsequent, relevant Resolutions adopted by the World Health Assembly. By Nestlé own assessment, of the violations of the Code and Resolutions documented by IBFAN, 90% are permitted by Nestlé’s narrower policies].

Our compliance is the most strict within the entire industry. [Baby Milk Action comment: Nestlé is a greater source of violations in IBFAN’s monitoring than any other company, with the possible exception of its main rival, Danone, the second biggest company – see, who is the worst].

We are training our employees. We have internal and external auditors in place. In fact, last year, we increased our level of audits to 43, which is an increase of 25%. And also our compliance policies towards our WHO Code commitments are also recognised through our inclusion in the FTSE4Good Index where since 2011 only Nestlé has been present. So for the last four years we are the only player in the industry who is recognised to have strict compliance policies in place. We are in fact audited every year on 104 points when it comes to OUR COMMITMENTS and we have passed them in the past four years. [emphasis added.]

[Baby Milk Action comment: FTSE has warned Nestlé several times not to suggest that inclusion in the FTSE4Good investment index signifies compliance with the WHO Code. Companies are assessed on their own policies, not the Code and Resolutions and Nestlé was only included after the criteria were weakened – and it weakened its own policies shortly before being included, knowing it would be assessed against those. IBFAN, Save the Children, UNICEF Lao and others have called on FTSE to strengthen its criteria].

So I believe that we have a very industry leading and strict policy in place.

When it comes to the movie you are referring to, we are aware of this movie. This is a movie that is set, I believe at the end of the ’90s, but these allegations made are highly questionable and certainly are not consistent at all with our policies that we execute in the markets.

[Baby Milk Action comments: Tigers is based on the true story of former Nestlé salesman, Syed Aamir Raza. Internal company documents provided by him show that he was performing the duties required of him. Indeed, a job description for the equivalent post in Canada in 2014 states the main responsibility is to, ‘Stimulate retail sales through the promotion of infant formulas and cereals to gain Healthcare Professionals recommendations..’]

[Baby Milk Action comment: In addition to the documentary evidence substantiating the allegations by Syed Aamir Raza, there were contemporary surveys conducted in 33 cities in Pakistan and published as the report Feeding Fiasco, which found evidence from health workers of the activities of company representatives. A Save the Children survey in 2012 found health workers continued to report being targeted by company reps. with Nestlé most prominent].

Well, I suggest that your shareholders make up their own minds.

Thank you for that, Madam.

I invite shareholders to view the film that will be shown in Switzerland in the Autumn 2015 and perhaps they will be able to make up their own minds.

[Baby Milk Action comment: As Camille Selleger said in her opening comments, the film includes actual babies, malnourished after being formula fed, who were filmed in 2013. Mike Brady spoke to shareholders next, showing a picture from a Bangladesh report from 2014 ‘Tragedies of infant formula and sub-optimal breastfeeding’. Despite knowing babies die from unsafe formula feeding, Nestlé promotes its infant formula in Bangladesh as the ‘gentle start’ for babies. Mr Schipper told investors in 2013 that this marketing campaign is a ‘growth engine’. See Mike Brady’s intervention and Mr Brabeck’s response.]