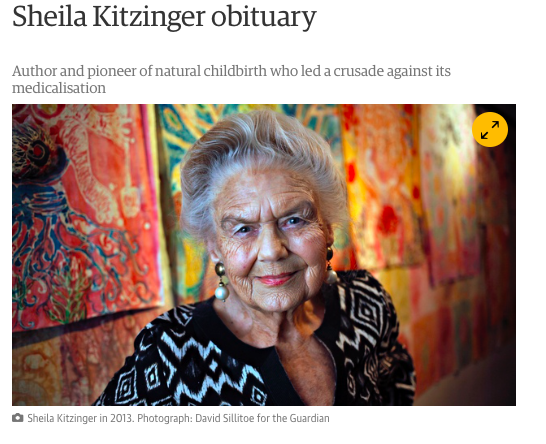 Everyone at Baby Milk Action was sad news to hear the news that one of our advisors, Sheila Kitzinger, died on Saturday 11th April,  aged 86.  Sheila was an author,  anthropologist and strong advocate of breastfeeding,  home birth and natural birth.   She was  a hugely interesting and vibrant personality always full of energy and ready with support, so we’ll really miss her.  She has been a huge support to Baby Milk Action since the 1980s  – and most recently we worked on the campaign for better conditions for mothers in  prison.  Our love  to her husband and daughters.   Here are some tributes:

Sheila was always upbeat about everything and I think she would want us to celebrate her full and productive life rather than mourn her going.  My friend Shelley Bovey introduced me to Sheila in the early 1970s and she was immediately encouraging about my ideas.  When I asked her to be a patron of Baby Milk Action she never hesitated. She was an effective catalyst personally as well as a campaigner.  In 1986 when she launched her ‘Issues in Women’s Health’ book series, she  asked me to write The Politics of Breastfeeding. But for her I might never have got round to doing it. Shelley Bovey  (who wrote ‘Being Fat is not a Sin’ in the series)  and I had lost touch but Sheila got us together again and we stayed in touch ever since.  One could phone her out of the blue whether about a big women’s health  issue or an individual’s pregnancy problems and she would always be interested. She would always say ‘Give your friend my number,’  I never heard her say she was too busy to do something. Her energy was prodigious.  We’ll all miss her.Gay Palmer, Author of Politics of Breastfeeding
________________

Prayers and sympathy to the bereaved family of Shiela Kitzinger. we are a fan of her prowess and personality in gentle birthing and breastfeeding advocacy and work. We grieve as she passed away to the next life after death.   Just yesterday, I lent my book to a pregnant mom in preparation for her birth and breastfeeding plan. DONA – Doula of North America includes her book as recommended readings for  those under training as birth and post partum Doulas.  Thank you Patti for sharing the news to the world.   Sincerely, Innes Fernandez, Arugaan,  The Philippines

Very sad. Sheila was a great pioneer for birth plans, and a wonderful advocate for home births and breastfeeding. She put mothers first.

UCL Pro-Provost for Africa and the Middle East

Immensely sad news. But what an amazing life, and what a contribution!  She’s been hugely influential over so many decades, and she never gave up working and advocating and thinking.  Her work on women’s rights, obstetric violence, FGM, women in prison, her advocacy for refugees, as well as all her work on birth, breastfeeding, and mothering, has been formative.  In person she was challenging (in a good way – raising questions others hadn’t thought about) – as well as kind, and immensely generous with her time and energy.

“La Leche League GB is saddened to learn of the death of Sheila Kitzinger.  Sheila was an amazing woman whose ideas helped to revolutionise thinking about the approach to giving birth. She provided women with the chance to think about what they wanted, to see the choices they might make, and to understand the joy of birth.

In the mid 1980s I was helping to organise a conference for LLLGB and my job was to write to Sheila to ask if she would be a speaker.  One evening I was cooking dinner for the family when the phone went and a voice said it was Sheila Kitzinger.  I was almost speechless with surprise and mumbled that I didn’t realise she would phone me herself.  Sheila replied that she always phoned people herself.  She added that she was a firm believer in the work LLL does to support breastfeeding, and would have loved to speak at our conference but was already booked.

I last saw her at the Doula UK Conference two years ago when she was on fine form.  An extraordinary lady who will be sadly missed.  Our sincere condolences to her family and friends at this sad time.”

I had no idea Sheila was in her 80s. She was a great influence on me when I was just beginning on the road to become a LLL leader, and I did like her books a lot. We need lots more Sheila Kitzingers, more than we ever did.   Sally Etheridge