Here are the IBFANBFLG comments on EFSA

IBFAN and the Baby feeding law Group have submitted comments to EFSA’s public consultation on its draft Scientific Opinion on the essential composition of infant and follow-on formulae. 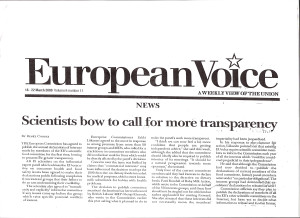 The Opinion reviews the existing advice, which dates back to 2003, taking into account more recent evidence and EFSA’s previous Opinion on nutrient requirements and dietary intakes of infants and young children in the European Union.

The proposed minimum amounts of nutrients in infant or follow-on formulae are derived from the intake levels which EFSA considered in its previous Opinion to be adequate for the majority of infants in the first half of the first year of life, and on the average amount of formula consumed during this period (500 kcal/day). They cover the nutritional needs of virtually all healthy infants born at term. From a nutritional point of view, there is no need to exceed these amounts in formulae, as nutrients which are not used or stored have to be excreted and this may put a burden on the infant’s metabolism.

EFSA proposes specifications for the content of protein, fat, carbohydrates, micronutrients and certain other ingredients. Among its draft conclusions are the following:

Infant and follow-on formula should provide indispensable and conditionally indispensable amino acids in amounts at least equal to those found in breast milk, irrespective of the protein source.

It is not necessary to add arachidonic acid, eicosapentaenoic acid, chromium, taurine, nucleotides, non-digestible oligosaccharides, “probiotics” or “synbiotics” to infant and follow-on formula.

For follow-on formula, unlike with infant formula, the addition of l-carnitine, inositol and choline is not necessary.

The Opinion rests on the assumption that all formulae intended for infants must be safe and meet the nutritional requirements of infants born at term when used as a sole source of nutrition during the early months of life and as the principal liquid element after the introduction of complementary feeding. Nutrients and substances should be added to formulae for infants only in amounts that serve a nutritional or other benefit.

Interested parties are invited to submit written comments on the draft Opinion by 29 May 2014.