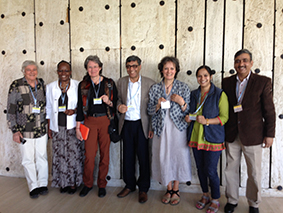 It’s been a very busy week – one very good result: Following our joint lobby with the People’s Health Movement, Third World Network and others a decision was adopted on Saturday 24th to have further consultation on the Framework on Non State Actors – especially on Conflicts of Interest and the Private sector: Click Here for “Draft decision resulting from a working group on Framework of WHO engagement with non-State actors”

In addition to topics such as  Maternal, infant and Young Child Nutrition and Non Communicable Diseases, we are following WHO’s Draft over-arching Framework of engagement with non-State actors. which we have many concerns about. Read our statement below:

DECISION adopted on the Framework on Engagement with Non State Actors

RESOLUTION adopted on the Action Plan on Newborn Health

Articles about WHO and Non State Actors in Update 46

1. DECIDES to introduce webcasting of future public meetings of committees A and B of the Health Assembly, as well as of its plenary meetings, to all internet users through a link on the WHO website, subject to resolution of any relevant technical issues and the availability of financial resources;

Time to turn the tide: WHO’s engagement with non-State actors & the politics of stakeholder-governance and conflicts of interest

I am deeply concerned that WHO’s so-called reform will side-line those who work in the spirit of ‘Health for All’ and expand the influence of business corporations and venture philanthropies over global public health matters as well as reinforce the trend towards fragmented, plutocratic, global governance.

Nearly three years ago, the journalist Nigel Hawkes pointed out in the BMJ, that several international non-governmental organisations (NGOs) had highlighted the problematic link between the WHO Director-General Dr. Chan’s suggestion to re-fill WHO’s coffers with funds from business and big philanthropic bodies through an “innovative financing mechanism” and the sudden introduction of an ambitious agenda for WHO reform. Dr. Chan proposed to include these funders in the making and shaping of health policies through a new World Health Forum. This proposal was published only days before the 2011 World Health Assembly giving insufficient time for proper analysis. Member States and NGOs were stunned to discover that the Director-General had already committed WHO to holding a first World Health Forum in 2012.

WHO’s Member States regained initiative. By the end of 2011 they had rejected the World Health Forum and attempted to reframe the reform agenda. They requested that “dialogue and cooperation with other stakeholders should be strengthened as appropriate while taking into account the importance of… managing conflicts of interest” and to explore “options for a framework to guide interaction between all stakeholders active in health.” (EBSS/2/DIV/2, para 2 (g) & (i), my emphasis)

In October 2013, after a change of terminology, WHO presented a Discussion paper on WHO engagement with non-State actors and draft outline of WHO’s plan to ensure Due diligence, management of risks & transparency at an informal consultation with Member States, NGOs and commercial actors. WHO leadership quashed considered criticisms by NGOs using statements such as: “we all have vested interests” and “don’t demonize transnational corporations”. NGOs and sceptical Member States were asked to “join the narrative of the 21st century.”

Member States and public interest NGOs found both papers wanting and requested changes. The successor of the October papers, the Background document, was discussed in March this year in a second consultation, open to Member States only. From what we know, it remained controversial. Member States have yet again criticised WHO for not providing all the documents needed for informed and timely discussion. They have noted the absence of a clear conflict of interest policy and requested that the forthcoming World Health Assembly (May 2014) gives guidance on the way to finalise the policy on engagement with non-State actors.