Infant and young child feeding was once more the centre of debate at the nutrition meeting of the Codex Alimentarius held in Bali, Indonesia this week. Of the 300 participants from over 50 countries there were over 100 food industry representatives including from baby food giants Nestlé and Danone (with over 40 on country delegations)  compared to 7 infant feeding health advocates from NGOs such as the global network  IBFAN.

Patti Rundall, of IBFAN says:“Corporations such as Nestlé, Danone and Mead Johnson realise the critical importance of Codex and flood the meetings with delegates – both as observers and as part of government delegations. This gives them access and endless opportunities to influence what happens.  In this compromised Codex environment, it’s essential that public health advocates such as WHO and  IBFAN  are there to ensure that the Codex mandate to protect public health is remembered.”

In one of the critical debates a form for older babies, the expert opinion of the World Health Organisation and many developing countries was sidelined in favour of  baby food industry and producer country interests. The failure to seek a genuine consensus has outraged and alarmed the health advocates present at the meeting.

The problem There is worldwide consensus that there is a global health crisis in nutrition and that the costs of diet related diseases are fast consuming health budgets.  The importance of early life feeding and behaviour has prompted priority calls for the protection, promotion and support of breastfeeding and an immediate end to the marketing of unhealthy foods to children,  most recently at the Second International Conference on Nutrition in Rome. (1)

WHO, reflecting its governing body the World Health Assembly (WHA) the highest global health policy setting body, reminded Member States of their commitments at these fora. WHO strongly advised Codex members that a standard for follow up formula (FUF) for older infants and young children was not necessary and contradicts these commitments. If a standard was to go ahead WHO said it must state clearly in the text that the products are not necessary and that marketing must be strictly controlled.

During the debate, one after another, a host of countries such as India South Africa, Senegal, Brazil, Kenya, Sudan, Norway, Bangladesh, Nigeria, Philippines and Togo supported WHO, many reiterating their frustration about the problems caused by these products and how they were not wanted or needed in their countries. 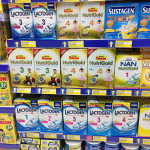 According to Euromonitor: “Nestlé Indonesia maintained its number one position in baby food with a value share of over 23% in 2013, marginally lower than in 2012….The company aggressively promoted Dancow through both above-the-line and below-the-line activities.”

As efforts to implement the International  Code of Marketing of Breastmilk Substitutes and Resolutions have made it harder for companies to directly advertise infant formula in many countries, companies have stretched the brands and invented a whole range of formula for older babies and young children. All formula have high profit margins.  These expensive products often share branding with infant formula and carry misleading, promotional and idealising claims regarding improvements in intelligence, eyesight and development. IBFAN’s evidence shows that the marketing is particularly intense in Asia and Bali supermarkets  a few steps from the meeting were stacked with such products.(2) 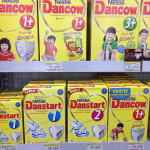 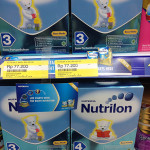 Obesity risk Formula for older babies can contribute to childhood obesity, as they are often sweetened and flavoured and can undermine breastfeeding and children’s acceptance of healthy family foods. Internationally recognised expert committees such as EFSA have now stated that they offer no nutritional advantage to the diets of young children. (3)

Since the logical public health solution to help phase out these products over time was ignored by Codex, it remains to be seen if the safeguards called for by WHO will be taken up. In the context of free trade agreements a clear statement that the products are not necessary – in both the standard and on labels – could help countries block imports  or control the marketing of products that pose a risk to health.

Conflicts of Interest During the discussion about the Codex Strategic Plan 2014-2019 IBFAN – speaking as IACFO raised concerns about the Conflicts of Interest in the composition of delegations, especially of those hosting Committees or working groups.  Supporting WHO’s call for health policy setting to be kept free from commercial influence, IACFO expressed concern about the need for the views of developing countries – the recipients of many unwanted ultra-processed products –  to be taken seriously. The Bali meeting covered several other infant feeding topics such as essential ingredients for formulas and Ready to Use products, throughout which many developing countries stressed the need to protect more sustainable bio-diverse, healthy and culturally appropriate local foods.

IBFAN will continue to call for all formulas marketed for infants and young children (0-36 months) to be included in one standard that must: state clearly that infant formula can be used after 12 months and that other products are not necessary; ensure that product composition does not compromise child health;  specify that marketing is strictly controlled according to the International Code of Marketing of Breastmilk Substitutes and subsequent relevant WHA resolutions.

1   ICN2 Rome Declaration adopted 19-21 November 2014 Commitment to Action: 15.g) “develop policies, programmes and initiatives for ensuring healthy diets throughout the life course, starting from the early stages of life to adulthood, including of people with special nutritional needs, before and during pregnancy, in particular during the first 1,000 days, promoting, protecting and supporting exclusive breastfeeding during the first six months and continued breastfeeding until two years of age and beyond with appropriate complementary feeding, healthy eating by families, and at school during childhood, as well as other specialized feeding”