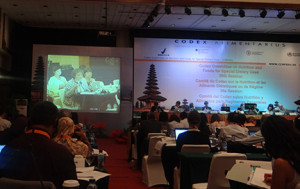 The IBFAN team is facing big challenges at the Codex meeting in Bali. The most important is perhaps the proposal for a revision of the Follow-up Formula (FUF) Standard. Many countries including India, South Africa,  Senegal, Brazil, Kenya, Sudan, Norway, Bangladesh, Philippines and Togo supported WHO’s strong recommendations for policy coherence,  reminding Member States of the Commitments they make at global fora such as ICN2 and the World Health Assembly (WHA).  WHO stated its position that the standard was not necessary but that if the Committee decided to go ahead then any new or revised standard should explicitly state  (in the preamble – not as a footnote) that follow-up formulas and other formulas for older babies are not necessary and that the labelling and marketing of these products is guided by the International Code of Marketing of Breastmilk Substitutes and subsequent relevant WHA resolutions.  IBFAN, IACFO,  ILCA and HKI also supported WHO.

Top: Patti  Rundall making an intervention in the opening session as  IACFO.

However their views were ignored and despite the fact that no consensus was reached and that India called for a vote on the question of age –  it was decided that the revision of the Follow-on formula standard should proceed focussing on  products 6-36months – in our view the very worst option.  IBFAN’s position  is that ideally there should be no Follow-up Formula  standard. However, recognising  that products are already  on the market, we recommend that they are  included in a renamed Infant Formula standard – where any compositional changes could be included as a footnote or if necessary as Part C.   (Formulas for infants and Young Children and for Special Medical Purposes).

This would ensure that they are  firmly covered by the the International Code, the Global Strategy of Infant and Young Child Feeding and WHA resolutions.

The new work will take several years to complete, so it will be vital that all those who care about child health follow this issue carefully to make sure that WHO’s recommendations are followed. The Electronic Working Group is chaired by two big producer countries New Zealand and France,and co-chaired by Indonesia. 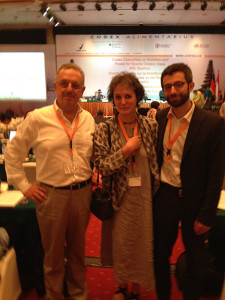 The end of an era. Patti with Basil Mathioudakis,  Head of Unit (left) and Francesco-Felice Carluccio from the European  Commission’s DG Sanco team. This was Basil’s last Codex meeting  after over 30 years.  He retires in February. Perhaps reflecting the conflicts that lie at the heart of European health policy-setting – Basil has, more often than not, been a thorn in IBFAN’s side, and after many battles we’ve even made a complain about him to the European Ombudsman. But as time has gone on he’s shown clear signs of mellowing!  At this meeting several of his interventions were really useful and  helped our advocacy. We wish him well in his retirement.

After 10 years, Janice Albert of FAO will  also soon retire and we wish her well also. 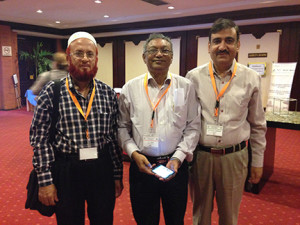