There has been a great response to this program, especially on social media.   But  also some vitriolic attacks – one from Dr Ellie Cannon in the Mail on Sunday.  Worth remembering our Press Release from 2016 – showing her links with Nestle and the SMA brand. Funny she didn’t mention that in the article. Here are some excerpts:

“Just because formula is manufactured – yes, processed – it doesn’t mean it’s unhealthy. Processed merely means ingredients have undergone a process (chopping a tomato is a process, as is heating soup).”…  In fact, formula milk is more than a healthy choice, and recent additions to ingredients means it now contains more essential fatty acids and pre and probiotics –… 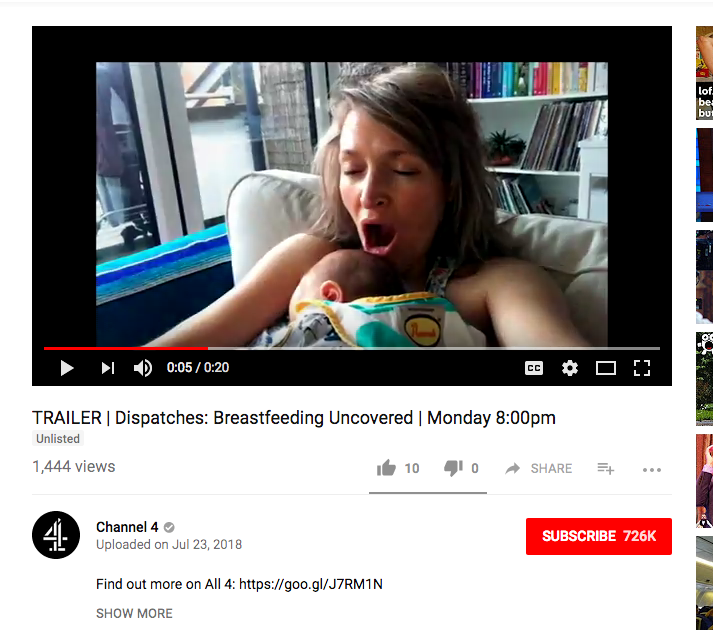 A study that challenges the WHO/UK Government advice on breastfeeding duration,  received much media coverage in July: CLICK here  for a report in the Guardian (9.7.18): Feeding your baby solids early may help them sleep, study suggests.  “An added benefit (of early introduction of solids) is that it seems to confer better sleep for the children,” said Gideon Lack, professor of paediatric allergy at King’s College London, and a co-author of the research.

Shame that far less coverage was given to the conclusion of the Scientific Advisory Committee on Nutrition HERE  ;  the Committee on Toxicity  HERE  or the excellent UNICEF BFHI response  HERE pointing out that the babies in the study slept  “7.3 minutes more per night on average over the duration of the study.”
HERE WE GO AGAIN?
Readers may recall how long the industry has fought to lower the age of introduction to solid foods to 4 months for purely commercial reasons.  Here are a few excerpts  about similar attacks on the WHO recommendations:
2009:European opinion on baby foods influenced by industry funding Press release 23 December 2009:
Health advocates predict a decline in breastfeeding if a new opinion of the European Food Safety Authority (EFSA) which is at variance with that of the World Health Organisation is translated into european legislation…..Labelling of baby foods as suitable from 4-months encourages the introduction of solid foods before the vast majority of babies are developmentally ready to eat family foods. Too early introduction of solids along with the high levels of sugar permitted in EU legislation contributes to the rising levels of childhood obesity. (4)  Impact on public health recommendations: EFSA has failed to consider the issue of developmental readiness, or the wider issue of how public health recommendations are interpreted. Before the UK adopted the WHO 6 month recommendation, the 5-yearly UK Infant Feeding Surveys shows that most babies were given solids far too early, before 4 months.(6) The message to start solids from 6 months led to a postponement until the 4-5 months, an important behavioural shift in public health terms. The proportion of mothers introducing solid foods by 4 months fell from 85% in 2000 to 51% in 2005. The proportion introducing by 3 months halved in that five years, from about 23% to 10%.(6) If the EFSA opinion is used to inform policy one can expect a reversal of this positive trend.

..The media coverage implies that the challenge is based on new evidence. In fact this is not a new scientific study nor a systematic review, but the authors review of selected past research, published in the ‘Analysis’ section of the BMJ.

Three of the four authors of the piece, Mary Fewtrell, Alan Lucas and David Wilson, receive funding from the baby food  industry. The baby food industry marketing strategy is to encourage parents to move onto processed foods, rather than family foods, and promoting their introduction before 6 months generally requires feeding purees and paps, which parents are less likely to home prepare. The risks of early introduction of complementary foods have been known for many years, with the World Health Assembly adopting a Resolution in 1994 saying that complementary feeding should be fostered from 6 months (rather than 4-6 months).

The UK government  commissioned a substantial review on this question with the Scientific Advisory Committee on Nutrition (SACN) did a risk assessment.  They concluded that there was  insufficient data to support the existence of a “window of opportunity” for the introduction of peanut before six months of age. Evidence that the introduction of hen’s egg before six months might be beneficial was limited and derived from RCTs where participants were not representative of the general population. The benefit risk assessment indicated that there were insufficient data to demonstrate that the introduction of peanut or hen’s egg into the infant diet between four and six months of age reduced the risk of developing food allergy to any greater extent than introduction from around six months.