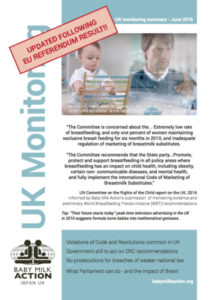 Click here to download our UK Monitoring Report, August 2016 (PDF), updated following the vote for the UK to leave the European Union.

Both were assessing the progress of the UK authorities in meeting their human rights obligations under international treaties. Both called on the government to implement the International Code of Marketing of Breastmilk Substitutes when they issued their concluding observations in June 2016.

A version of the report was presented in Parliament to the All Party Parliamentary Group (APPG) on Infant Feeding and Inequalities on 17 May 2016 by Mike Brady, Baby Milk Action Campaigns and Networking Coordinator.

This set out the action that Members of Parliament (MPs) can take to improve implementation of the International Code and subsequent, relevant World Health Assembly Resolutions in the UK. One action was to support Early Day Motion 1189, a petition for MPs, calling for better enforcement of regulations. This campaign was successful. See our special Mothers Need Support not Pressure page or our blog post on the presentation.

The Department of Health had proposed decriminalising certain aspects of the legal requirements under a new Improvement Notice regime. This proposal was dropped when the Statutory Instrument was published on 20 July 2016: Improvement Notices can be issued if formula composition, labelling, advertising or presentation brake the law. It is a criminal offence not to act on the notice by the specified deadline, punishable by a fine. The Improvement Notice regime will apply in England, Northern Ireland and Wales. In Scotland, breaches are also a criminal offence and companies will not be given the chance to comply through an Improvement Notice prior to prosecution. Click here for our campaign page leading to this success.

As the monitoring report shows, violations are commonplace in the UK. Even the narrower formula marketing regulations introduced are routinely broken by manufacturers and distributors. We will be submitting cases to the authorities calling for action to be taken under the new Improvement Notice regime.

We have updated the report following the vote in the referendum on 23 June 2016 for the UK to leave the European Union. Also see our briefing paper on what Brexit means for our work.

Printed copies of the monitoring report have been sent to Baby Milk Action members (unless they have opted for email only).