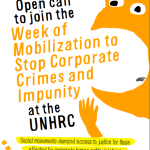 UPDATE 26 June 2014: Victory at the UN Human Rights Council – the resolution to draft the treaty was passed, despite opposition from the US and EU. The UK has a vote at the Council and voted against. So please contact your Member of Parliament as suggested below.

Baby Milk Action is part of an international campaign calling for a treaty to protect people from corporate human rights abuses.

The discussion about this is going on right now at the UN Human Rights Council in Geneva.

The latest news is the European Union is opposing the resolution put forward by Ecuador and South Africa for a working group to draft the treaty. See Inter Press Service report 24 June 2014:
EU Aims to Scuttle Treaty on Human Rights Abuses

Organisations and individuals can support the campaign for a treaty at: http://www.treatymovement.com/statement/

Individuals can also write to their elected representatives calling on them to give government backing to the proposed treaty. To write to your MP in the UK, go to: https://www.writetothem.com

I am contacting you from Baby Milk Action, the UK member of the International Baby Food Action Network (IBFAN).

We have been following developments at the 26th Session of the Human Rights Council on a resolution to start the process of elaborating an international treaty on the issue of business and human rights with interest.

We welcome the resolution proposed by Ecuador and South Africa to establish an open-ended intergovernmental working group with the mandate to elaborate an international legally binding instrument on Transnational Corporations and Other Business Enterprises.

We would be grateful for confirmation of whether your Government will be supporting this resolution, alongside the growing number of countries that have pledged their support (over 80 countries did so during the last session in September 2013, I understand).

Our interest in this issue is we have been pursuing complaints of human rights abuses by a leading baby food company using existing non-binding measures. Some governments argue against legally binding instruments, claiming that non-binding intiatives such as the UN Global Compact and the OECD Guidelines for Multinational Enterprises can address these concerns. We have tried pursuing cases through these channels for five years and, to be blunt, we have found them to be worse than useless.

The company in question has refused to take corrective action and there is nothing the UN Global Compact Office nor the relevant National Contact Point for the OECD Guidelines seem able to do to compel them to do so. Both have simply closed their case files. Meanwhile, the company cites its support for these initiatives to divert criticism of its activities and has its misleading Corporate Social Responsibility reports posted to the Global Compact website.

There needs to be an effective mechanism through which corporations are held to account. The proposed working group would be able to develop proposals and, hopefully, investigate those put forward by ourselves and others. In our view, Governments have a collective responsibility to act to protect human rights when national measures fail to do so.

The public support of your Government for these measures will make a significant difference. For this reason, we ask that your Government lend support the resolution and encourage other governments to do the same.

I would be grateful if you could inform me of the position your Government will be taking.

If you would like to discuss the above issues further, I can be contacted on xxxx xxxxxxxxx.

A list of resources on the G7/8 New Alliance