Nestlé’s 146th shareholder meeting was held in Lausanne, Switzerland, on 11 April 2013 and, in addition to complaining that “The political and regulatory environment for publicly listed companies is becoming more difficult in this country”, Chairman Peter Brabeck-Letmathé launched his latest CSV report. 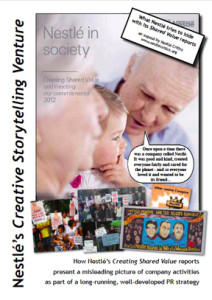 This refers to Nestlé Creating Shared Value Initiative, though critics suggest CSV should really stand for Creative Storytelling Venture as the picture painted by the CSV reports is misleading.

The Nestlé Critics released an analysis of the latest CSV report and called on those wishing to improve Nestlé behaviour to look at what Nestlé actually does, not just what it says it does.

Click on the image for a large version of the cover.

Lida Lhotska of the Geneva Infant Feeding Association (GIFA), which is the European Coordinating Office of the International Baby Food Action Network (IBFAN) addressed the board (full text). She pointed out the misleading nature of the CSV reports and referred to a new report from Save the Children, which exposes aggressive baby milk marketing practices by Nestlé and other companies:

“In the report, the Nestlé’s board of directors has attempted to reassure shareholders and the wider public by stating that in 2011 it had to act on just 19 violations of these marketing requirements. This figure is misleading as the report does not state that in 2011 Nestlé executives rejected 97% of the violations reported by IBFAN in its latest Breaking the Rules monitoring report.

“IBFAN’s findings about Nestlé’s systematic violations have often been dismissed as claims made by an anti-industry NGO. It will thus interest this audience to learn about the report from Save the Children called Superfood for Babies, published in February this year. The report highlights the need to protect and promote breastfeeding and, exposes violations by various baby food companies, including by Nestlé in China and Pakistan… The report also draws attention to Nestlé’s leading role in trying to weaken the marketing requirements in the Philippines.”

As the Nestlé Critics report explains, Nestlé Public Relations (PR) strategy for diverting criticism was developed in the 1970s by PR guru Raphael Pagan and continues to be followed to this day, with modifications involving sometimes underhand practices, such as spying on campaigners (a Swiss court ordered Nestlé to pay damages and costs to Attac Switzerland in January 2013 after it infiltrated the group).

Nestlé’s CSV reports are part of this strategy and have reaped rewards as various organisations rank companies based on the company’s presentation of its activities. Mr. Brabeck referred to three such initiatives in his address to shareholders: FTSE4Good ethical investment Index, the Access to Nutrition Index and Oxfam’s Behind the Brands ranking.

While highlighting these initiatives, Mr. Brabeck did not mention that FTSE wrote to Nestlé Chief Executive, Mr. Bulcke, on 14 November 2011 about activities detected in India that could be regarded as promotional, including supporting conference attendance, activities which the Indian Government has said break its laws. Nor did he mention that while Oxfam did score Nestlé better than other companies, reflecting the effectiveness of his Creative Storytelling Venture, Oxfam was still critical about failings in Nestlé’s policies, particularly with regard to water.

“Nestlé has created a fictional world where it is this nice, kind company that respects human rights and cares for the environment and asks policy makers and civil society to trust it – and not regulate its practices. Too many have fallen for Mr. Brabeck’s Creative Storytelling Venture and so willingly or inadvertently have become part of his PR strategy, as demonstrated in his address today. Anyone wishing to have a positive impact on Nestlé’s practices would do better following the examples of IBFAN and Save the Children and monitor what the company is actually doing and hold it to account for malpractice. Nestlé should be marked down when its CSV reports are misleading, as is demonstrably the case with regard to its baby milk marketing and the other issues addressed by the Nestlé Critics.”

Lida Lhotska closed her address to the Nestlé board by asking for a response to those who had supported Save the Children’s recent campaign:

“Mr. Chairman, I understand that Nestlé has received over 4000 emails and hundreds of Facebook comments from customers and members of the public about the Save the Children report and over 12,000 peopled have signed a petition launched by the NGO calling on Nestlé to abide by the international marketing requirements. Despite the claims in the Creating Shared Value reports, people and organisations remain concerned about Nestlé’s actions.  Do you have any message for those calling on you to drop the strategy of denying the evidence? When will you take serious actions to stop the violations that undermine the health of children?”

Nestlé CEO, Paul Bulcke, dismissed the email campaign by saying the messages were identical. Mr. Brabeck said Nestlé would respond to the detailed reports on the violations, but there are other reasons why mothers do not breastfeed. Mr. Luis Cantarell, President and CEO of Nestlé Health Science S.A. and Head of Nestlé Nutrition, read a prepared response again stating Nestlé was the only baby milk company that made it onto the FTSE4Good index. He explained Nestlé has internal and external verifications, with Bureau Veritas performing these in four countries in 2012 and another company performing assessments for FTSE in Laos, Morocco and Nestlé headquarters.

As Nestlé boasts of its inclusion in the FTSE4Good Index, UNICEF Lao has explained why it refused to cooperate with FTSE when its visited the country to assess Nestlé under the flawed FTSE4Good Breastmilk Substitutes Criteria and has produced its own report showing violations, principally by Nestlé and Danone.

Peter Brabeck also  referred to IBFAN’s criticism of Nestlé’s involvement in the Mexican  Crusade against Hunger.