Click here for Save the Children’s press release, report and petition campaign

The International Baby Food Action Network  (IBFAN) welcomes the renewed commitment to infant and young child feeding shown by Save the Children with the publication of its report “Superfood for Babies: How overcoming barriers to breastfeeding will save children’s lives” As partners for many decades, IBFAN looks forward to working together on our common objectives (quote from IBFAN given below).

Breastfeeding is a public health imperative

“Breastfeeding is a public health imperative”, so states the Declaration and Call to Action from IBFAN’s World Breastfeeding Conference in New Delhi in December 2012, which was organised with the support of Save the Children, involving over 700 participants from 83 countries. The recommendations in the new Save the Children report reflect some of those in the call to action. IBFAN looks beyond the concept of breastmilk as “superfood”: the process of breastfeeding continues the development that began in the womb and babies who are not breastfed are more likely to suffer  cognitive and developmental deficiencies and short- and long-term illness. As the declaration states:

“There is no food more nutritious, locally produced, affordable and sustainable than breastmilk. Artificial feeding increases the risk of not only childhood infections, but also of non-communicable diseases (NCDs) such as diabetes, obesity, cardiovascular disease and cancers, which are assuming epidemic proportions. But two out of three infants or 92 million infants of 136 million born – are either artificially or mixed fed. Breastfeeding has enormous benefits for maternal health, and is an important factor in child spacing for the millions of women who have no access to modern forms of contraception”

IBFAN has worked with Save the Children through the UN system and directly with governments to encourage policy makers to take action to protect, promote and support breastfeeding. This led to the adoption of the International Code of Marketing of Breastmilk Substitutes in 1981 and to 15 subsequent, relevant Resolutions addressing changes in marketing practices and scientific knowledge.

Today over 60 countries have introduced legislation implementing most, or many but not all, of the provisions of the Code and Resolutions, always in the face of opposition by the baby food industry, which also attempts to weaken regulations already introduced. 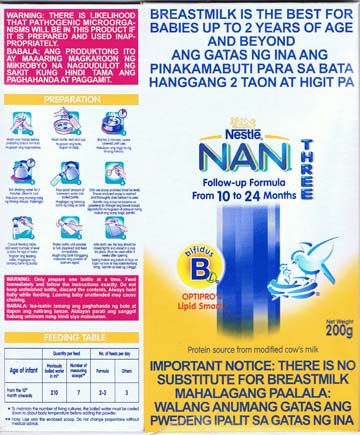 In its report Save the Children is recommending that national laws should specify that health warnings should cover one-third of packaging of breastmilk substitutes.

Current regulations in the Philippines require this (left) – showing it can be done – but they are under attack by Nestlé.

Nestlé is leading an industry attempt to replace the Philippines regulations with its own weak law, which will mean (amongst other things) that the clear warnings will go. Instructions won’t even have to be translated into Filipino. Members of Congress are under pressure to pass Nestlé’s draft bill and have been told jobs will be lost and hundred of millions of pounds of investment will be affected if it is not passed.

Even now, Nestlé tries to undermine the warnings with logos and health claims suggesting benefits from using its formula.

You can sign a petition of solidarity with the Philippines on the AVAAZ site.

Where Code-based measures have not been introduced or are not enforced, companies fail to meet their obligation to abide by the Code and Resolutions independently of government measures. Current concerns include companies targeting pregnant women and new mothers using “mother and baby clubs”, making health and nutrition claims for formula, sponsoring health workers and promoting brand names and artificial feeding using so-called Growing Up Milks, which are unnecessary. Accordingly, IBFAN is particularly supportive of the Save the Children call on the UN for a monitoring body independent of corporate interests:

to hold companies accountable at a global level, the UN should mandate WHO to create a body to monitor reports of Code violations or strengthen existing bodies such as IBFAN. That body should have the power to rule on Code violations and work with national regulatory bodies to issue penalties including fines based on the size of the violation and the size of the company’s turnover. The operating costs of this body could be covered by a combination of donor funding and the fines issued.

Health workers and conflicts of interest

As well as protecting the right of the mother/child dyad to breastfeed and ensuring mothers who use formula have accurate independent information, it is necessary to ensure mothers have support from health care systems, health workers and mother-support groups, who are not compromised by conflicts of interest. In too many countries, the health care system has become a means for companies to promote their products. Resolutions WHA 58.32 calls for action “to ensure that financial support and other incentives for programmes and health professionals working in infant and young child health do not create conflict of interest”.

IBFAN is also a founder member of the Conflicts of Interest Coalition, which calls for health policy setting at national and international level to be protected from commercial influence.

Protection and support for working mothers

The recommendation in the report for protection and support for working mothers is welcome. The World Breastfeeding Conference declaration calls for action to: “Support all women with a comprehensive system of maternity protection at work, including the non-formal sector, with a provision of financing.” IBFAN groups are actively working to encourage their governments to take action, using the minimum standards in ILO Maternity Protection Convention 183 as a starting point.

Implementing the Global Strategy for Infant and Young Child Feeding

As Save the Children has documented in its report, the action required to save millions of lives and prevent unnecessary suffering is already known. In 2012 policy makers adopted an implementation plan for the Global Strategy for Infant and Young Child Feeding first adopted in 2002 and need to deliver on this commitment. IBFAN’s World Breastfeeding Trends initiative, a participatory action led by IBFAN, has generated score cards on progress for a growing number of countries (51 in the latest report), facilitating further action by governments and public-interest actors, to enable mothers to feed their babies optimally: exclusive breastfeeding for the first six months followed by nutritionally adequate and safe complementary foods while breastfeeding continues for up to two years of age or beyond.

This important report from Save the Children should remind policy makers that protecting parents’ rights to independent information and supporting breastfeeding as the norm for feeding babies are public health imperatives. Instead of subsidising formula companies to boost exports or attract investment, allowing them to influence health and nutrition policies or involving them as partners in education initiatives, governments should ensure all inappropriate marketing is ended, and invest in policies to ensure mothers get the support they need to breastfeed and care for their babies. This will save our health care systems and national budgets a fortune and help the world to meet the Millennium Development Goals for reducing under-5 and maternal mortality. We know what needs to be done and have been making gradual progress – let us hope this report will help produce a quantum leap forward.