As we all mourn the loss of Pelé, regarded by many as the world’s greatest football player ever,  CLICK HERE for a piece from Kul Gautam, a former Deputy Executive Director of UNICEF and Assistant Secretary-General of the United Nations, explaining more about Pelé’s humanitarian work and his support in the 1980s and 90s for a UNICEF breastfeeding promotion campaign. The campaign featured a poster with Pelé’s mother –  patting her son on the shoulder saying: “Of course, he is the best football player in the world. I breastfed him!”   As Kul Gautam says, the campaign led to a  dramatic increase in breastfeeding saving thousands of Brazilian lives.  Click HERE and HERE  for some of the evidence.

UNICEF and WHO Joint Statement on Breastfeeding 31 July 2022

CLICK HERE  for a tribute to IBFAN friends Gerson da Cunha and Peter Greaves who helped spearhead the campaign, building social mobilization actions around breastfeeding – with postmen and firemen promoting breastfeeding and short breastfeeding messages on every bank receipt! 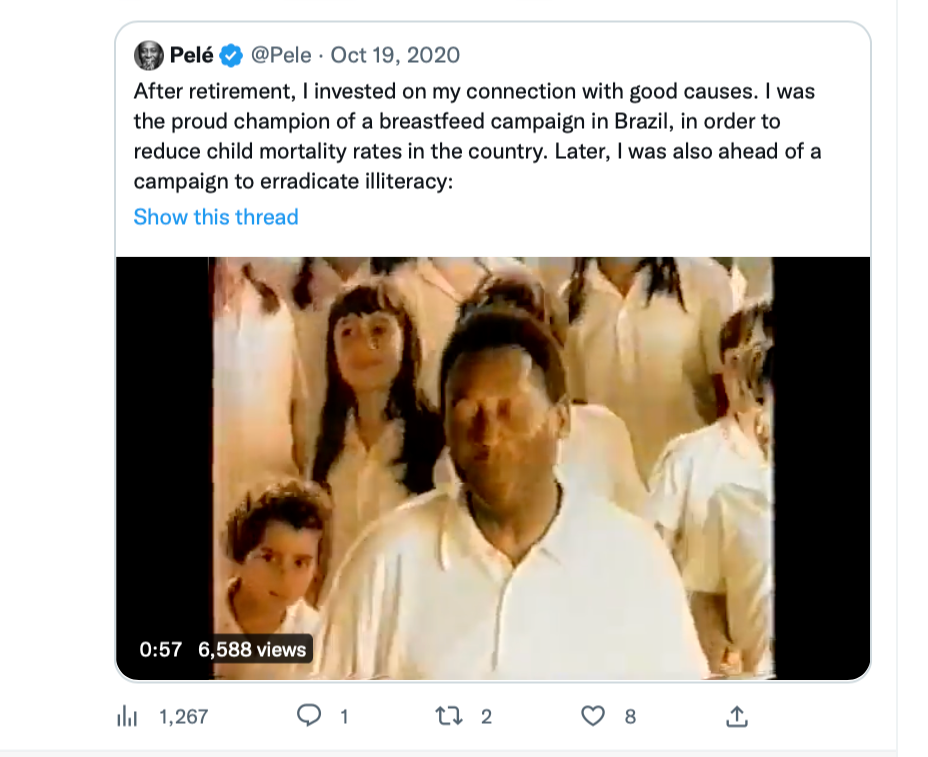 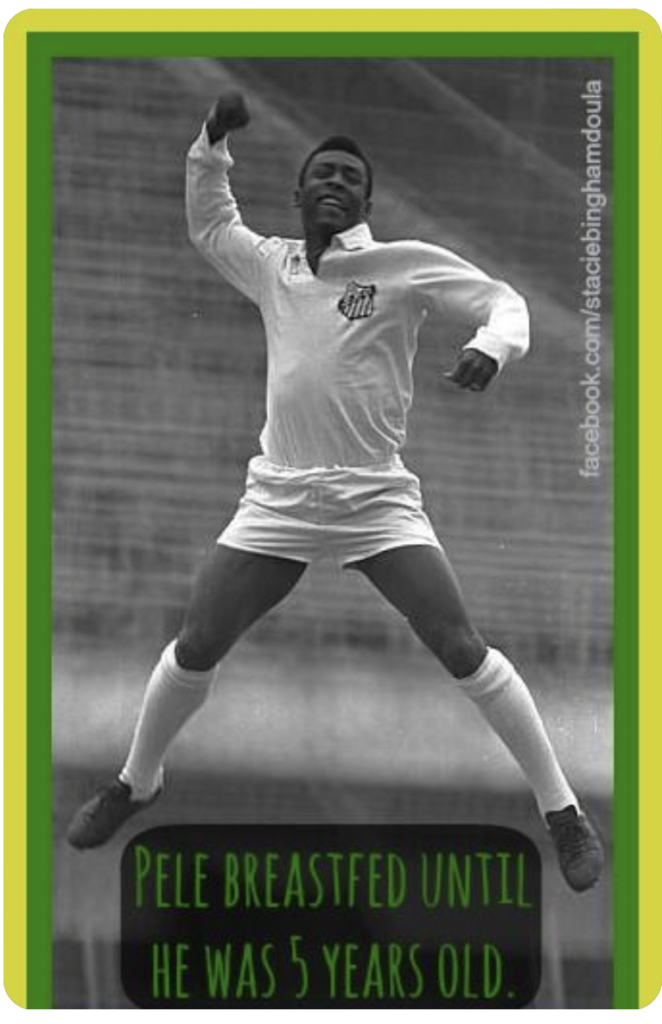 KATHMANDU, Nepal, Jun 27 (IPS) – Kul Chandra Gautam, a former Deputy Executive Director of UNICEF and Assistant Secretary-General of the United Nations, is author of a forthcoming memoir: “Global Citizen from Gulmi: My Journey from the Hills of Nepal to the Halls of United Nations”.

Pele’s example has inspired millions of young people to join the ‘beautiful game’ and contribute to building a peaceful and prosperous world fit for all our children.  As billions of people around the world—including millions of Nepalis—are glued to their televisions watching the 2018 World Cup, I wish to reminisce about the humanitarian dimension of a great football star who is currently not in the pitch. Pelé.

Everybody knows Pelé as probably the best football player in the world in history. But few people know about his important contribution to other great social causes. Unbeknownst to many of his fans, Pelé helped save the lives and improve the health of millions of children in Brazil.

He also helped promote such worthy global causes as ecology and environment, sports and development and peaceful resolution of conflicts as goodwill ambassador for the UN, UNESCO and UNICEF.

In the 1980s and 90s, UNICEF was involved in promoting many innovative methods of social mobilization to influence child-friendly public policies in Brazil. One example was promotion of breastfeeding to enhance child health and to reduce the high rates of infant mortality and malnutrition.

Due to the aggressive marketing of baby milk formulas by private multinational companies, breastfeeding had declined dramatically to the point that in the 1980s only eight percent of Brazilian mothers exclusively breastfed their babies during the first six months. UNICEF explored how best it could help reverse this dangerous trend.

Efforts to promote breastfeeding by the Ministry of Health and by concerned pediatricians were not producing the desired results in the face of very aggressive and deceptive advertising by the infant formula companies. In its search for who might be the most respected and credible messenger whose advice mothers would pay attention to, UNICEF came up with the most unusual yet obvious choice: Pelé—Brazil’s most popular and the world’s best football player.

It did not take much effort for UNICEF to convince Pelé to lend his name to this worthy mission of saving the lives and protecting the health of millions of Brazilian children. Decline in breastfeeding affected all segments of Brazil’s population but the worst consequences were among the poorest.

As the world’s leading child health organizations, UNICEF, WHO and the International Pediatric Association, had uncontested scientific evidence that breastfeeding was the best nutrient for infants, and that exclusive breastfeeding for the first six months and continued breastfeeding for up to two years with gradual introduction of healthy weaning foods protected children from infection, malnutrition and common childhood diseases.

With rare exceptions, all mothers are capable of breastfeeding which has many lifelong advantages for infants as well as for their mothers and society as a whole.

With such arguments UNICEF convinced Pelé to be its champion for breastfeeding. It helped prepare an attractive poster that was plastered all over the country in which Pelé’s mother was shown patting her famous son on the shoulder and saying: “Of course, he is the best football player in the world. I breastfed him!”

This poster became the centre-piece of a breastfeeding promotion campaign that led to a dramatic increase in exclusive breastfeeding to almost 40 percent within a few years. The lives of thousands of Brazilian children were saved and health of millions improved as a result of this campaign.

As UNICEF’s Chief for Latin America and the Caribbean in the 1980s, and later as its global Program Director, I had the opportunity to visit Brazil many times and witness the impact of Pelé’s contribution—along with that of the Catholic church and Brazil’s vibrant media—in that country’s impressive progress in child survival and development.

Some evidence of the impact of breastfeeding on child survival

Abstract In a population-based case-control study of infant mortality in 2 urban areas of southern Brazil, the type of milk in an infant’s diet was found to be an important risk factor for deaths from diarrheal and respiratory infections. Compared with infants who were breastfed with no milk supplements, and after adjusting for confounding variables, those completely weaned had 14.2 and 3.6 times the risk of death from diarrhea and respiratory infections, respectively. Part-weaning was associated with corresponding relative risks (RR) of 4.2 and 1.6. The risk of death from infections other than diarrhea or respiratory infection was less clearly associated with breastfeeding (completely weaned, RR=2.5; partly weaned, RR=0.4). Cow’s and formula milk seemed to be equally hazardous. For deaths due to diarrhea the increased risk associated with not breastfeeding was greatest in the 1st 2 months of life (RR for completely weaned vs. breastfed without supplementary milk =23.3). (author’s modified).

Infant feeding and deaths due to diarrhea. A case-control study

The association between infant feeding habits and infant mortality from diarrhea was investigated in a population-based case-control study in two urban areas in southern Brazil during 1985. Each of 170 infants who died due to diarrhea was compared with two neighborhood controls. After allowance was made for confounding variables, infants who received powdered milk or cow’s milk, in addition to breast milk, were at 4.2 times (95% confidence interval (CI) 1.7-10.1) the risk of death from diarrhea compared with infants who did not receive artificial milk, while the risk for infants who did not receive any breast milk was 14.2 times higher (95% CI 5.9-34.1). Similar results were obtained when infants who died from diarrhea were compared with infants who died from diseases that were presumed to be due to noninfectious causes. Each additional daily breast feed reduced the risk of diarrhea death by 20% (95% CI 2-34%), but the increase in risk associated with each bottle feed was not significant after allowance was made for the number of breast feeds. The only other consumption variable associated with diarrhea mortality was the frequency with which tea, water, or juice were drunk with each feed (increase in risk, 42% (95% CI 4-93%]. The odds ratios associated with nonbreast milk were highest in the first two months of life. Possible biases were investigated, including the interruption of breast-feeding as an early consequence of the terminal illness, but the strong protective effect of breast-feeding persisted after these

Statement by Dr Tedros Adhanom Ghebreyesus, Director General of WHO 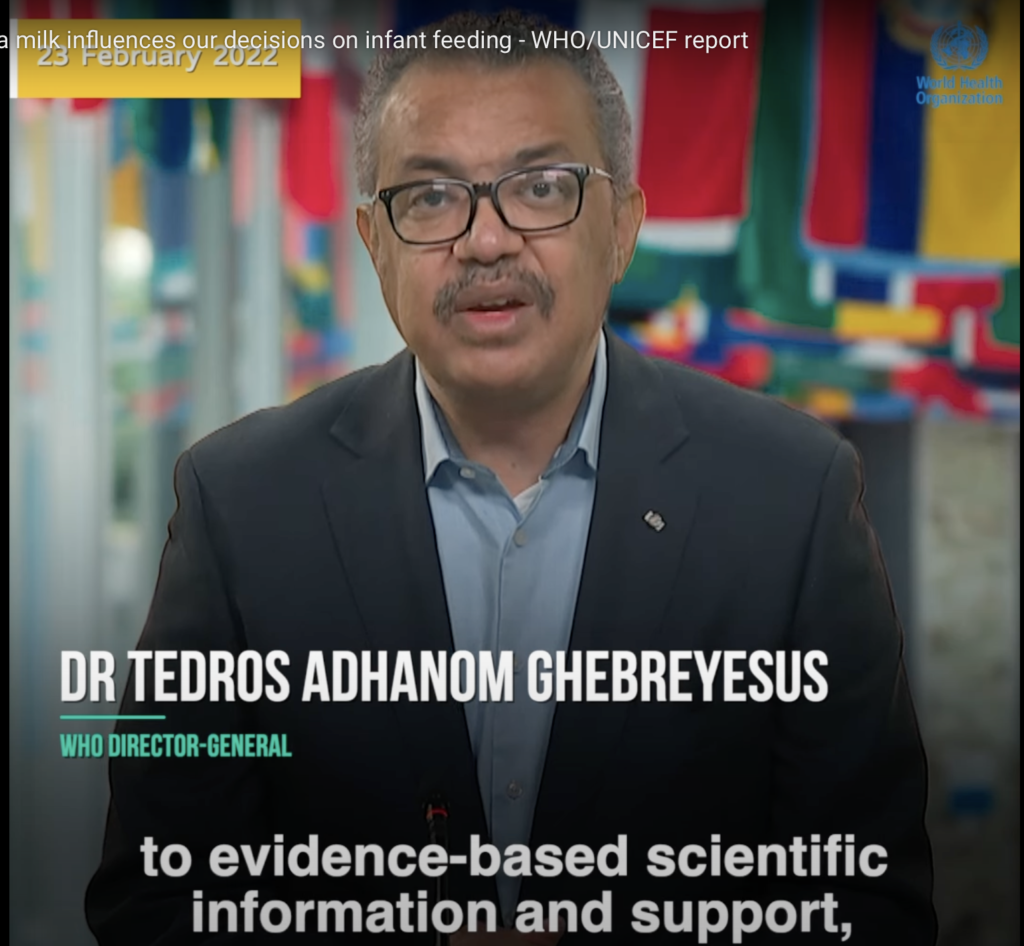