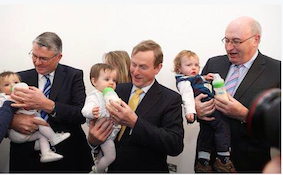 The Irish government’s clamour to welcome Glanbia’s new €235m dairy facility in Kilkenny:. “The 23,500 sq metre facility in Kilkenny is finished to meet infant formula standards and will manufacture milk powder products and nutritional ingredients for export markets. It will focus on Asia, the Middle East, Africa and Central America.” Earlier this year the ‘Growing up in Ireland‘ report revealed that Ireland now has the lowest rate of breastfeeding in the world:

In a few hours, Nestlé whistleblower Syed Aamir Raza,  Mike Brady and I will  join IBFAN friends in Italy – where Tigers will be shown in the oldest cinema in Florence to celebrate International Women’s Day . (1)

Its been a busy time and as this picture from Ireland shows,  as far as the marketeers are concerned women are fast becoming redundant  when it comes to babies.

No wonder we are having such a struggle to bring the European Union into line with the minimum International requirements set by the World Health Assembly.   At the meetings with the EU commission last month we were asked why we were complaining about EU standards when the US is so much worse.  True – but is it really something to be proud of that our laws a just slightly better than a country where the laws are absent?

To see the type of advertising allowed in the US CLICK HERE https://m.youtube.com/watch?v=Y5jwHlUkWJ0