When Tesco broke the criminal law with a promotion for Nestlé’s SMA infant formula, we reported it to Trading Standards via the system operated by Citizens Advice Bureau (CAB). We advised members of the public to do the same.

Trading Standards have confirmed this is exactly the right action to take.

But what happens next?

We went back to CAB to report continued breaches of the law. Tesco had told us it had acted immediately to remove the promotion. It told us it had informed its Trading Standards Authority of the steps it had taken. But the promotion continued. Not only that, it was installed in a store that first opened its doors three weeks after Tesco said it had instructed managers to remove it.

That seems eminently sensible as the evidence would show that the illegal practices were not isolated, but national, and Tesco’s assurances did not reflect reality on the ground.

One might expect the primary authority to take legal action, particularly over a repeat offence. However, its role is to liaise with the retailer for it to correct its behaviour.

The primary authority explained to us that any legal action is the responsibility of the authority local to the complainant. Even if no offence took place in that county or was an isolated incident as far as that office was concerned.

Trading Standards officers have access to a central database of cases and could decide to take action for the good of the nation as a whole. That has only happened once since the first version of Infant Formula and Follow-on Formula Regulations were introduced in 1995 (Birmingham Trading Standards won a case against illegal advertising of SMA infant formula in 2003).

One prosecution in 20 years.

Most breaches of the law will be resolved through advice or written warning. However, prosecution or formal action is an important part of the enforcement process. It will only be considered when:

• There is a significant risk to public safety or it is in the wider public interest to prosecute
• Fraudulent practice is involved
• There has been a repeated failure to heed advice
• There has been an obstruction of authorized staff carrying out their duties.

And having regard to the following:

• The evidence provides a realistic prospect of conviction
• The conviction will result in a significant sentence
• Consideration of the defendant’s previous behaviour
• The time in bringing the matter before a court / tribunal.

Certainly on some of these grounds one might think there are grounds for prosecuting Tesco. But a local authority must decide it is worth the effort. In the 2003 case, SMA’s then owners contested it, dragging it out over 8 days (the Judge fined the company, saying, ‘The Defendants have deliberately ‘crossed the line’ in an effort to advertise direct to a vulnerable section of society. This is a cynical and deliberate breach of the regulations.’)

The primary authority advised us we could raise our concerns with the Department of Health. It took over responsibility for health policy and the regulations in 2010. It also took over Guidance Notes on how the law should be interpreted from the Food Standards Agency.

The official interpretation is systematically broken by companies with product labelling, advertising and point-of-sale promotion.

Danone and the British Retail Consortium have said openly that they do not accept or abide by the government’s official interpretation of the regulations. 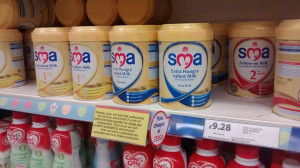 As in many other countries, manufacturers and distributors of breastmilk substitutes have forged ‘partnerships’ with the Department of Health, creating conflicts of interest. Often this is to address concerns such as the rise in obesity (in which the same companies are implicated). In the case of England, Tesco and other retailers, Nestlé and other manufacturers, are partners in the Department of Health’s Change4Life health promotion campaign.

Where does this leave us?

The advice of the Trading Standards primary authority for Tescos is that people should continue to report complaints through CAB. Eventually a local authority may take up a case – and all reports are logged centrally.

We ask that you also continue to report cases to us. We will expose companies that break the rules. Tesco did eventually remove its price discount promotion – though not yet all promotional materials. It finally answered our questions and promised a shake up after we ran a Twitter campaign.

Carry our handy ‘Spot it – Report it’ cards with you.

Where possible, we will try to stop companies breaking marketing rules before they do so. We successfully stopped the SMA Baby Know How road show touring shopping centres in 2012. Boots cancelled SMA Careline staff visiting stores on 12 February when we put a monitoring exercise in place and people complained to Boots. 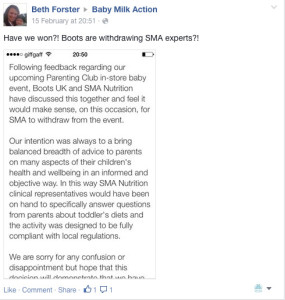 We will continue to make the case for the enforcement system to be reformed to make it effective and deter repeat offenders.

There is currently an opportunity at European Union level as the European Commission is drafting new regulations. We called on it to improve the text last week, presenting monitoring evidence of what companies are actually doing.

This is a campaign that will run throughout 2015. You can support it here.