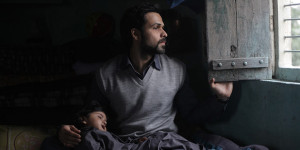 Produced by Prashita Chaudhary of Cinemorphic, co-produced by Guneet Monga of Sikhya Entertainment and co-starring National Award-winning actress Geetanjali,Tigers is a true story of the salesman who blew the whistle on the baby food scandal in Pakistan.

Tigers premiered at the prestigious Toronto International Film Festival in September this year where it got a standing ovation and rave reviews. It was followed by the fantastic response at San Sebastian Film Festival.

Says Tanovic whose No Man’s Land had pipped Lagaan to the Best Foreign Film Oscar more than a decade back: “I’m curious to see how Indians react to Tigers. I’m very happy with the response at the festivals. The theatrical release is the next frontier.”

Adds Prashita: “I set out to make films that would be lauded not just at international festivals but also be loved by the common audiences. Tigers is that film. Although it is directed by a foreigner, it has all the elements and emotions to reach out to Indian audiences everywhere.”

Produced by Prashita Chaudhary of Cinemorphic, co-produced by Guneet Monga of Sikhya Entertainment and directed by Oscar winning director, Danis Tanovic, Tigers will release in India on March 6, 2015.

Tigers is based on the true story of a former Nestlé baby milk salesman called Syed Aamir Raza taking on the industry with the help of IBFAN (the International Baby Food Action Network) when he realises that babies are dying as a result of his work pressuring doctors to promote formula.

One character in the film embodies some of the IBFANers who helped Aamir, including Tracey Wagner-Rizvi, Andreas Adelberger and Baby Milk Action’s Patti Rundall and Mike Brady.

You need to be a member/subscriber to see the rest of this article. Click here to join.