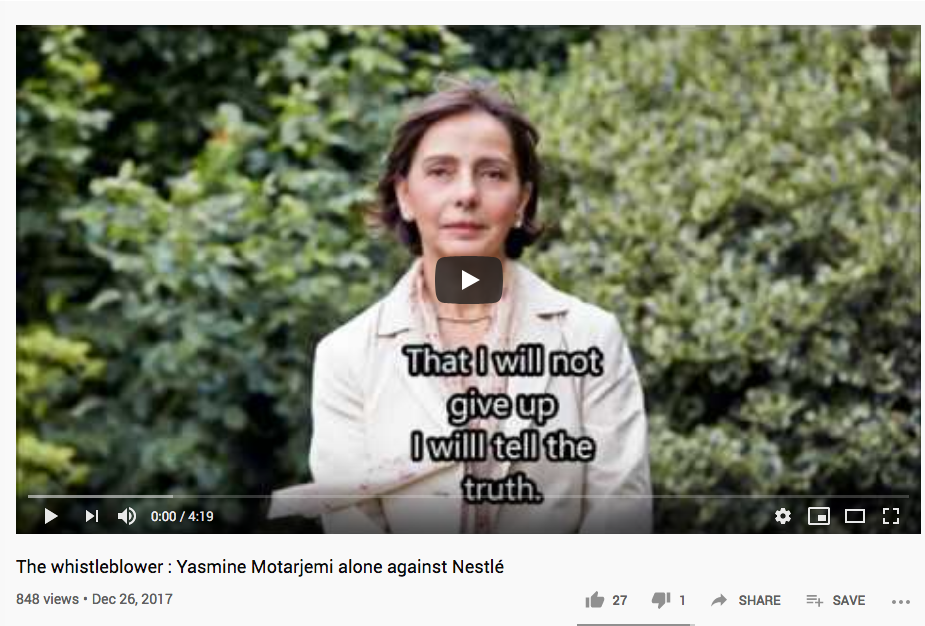 Yasmine Motarjemi, Ph.D., holds an M.Sc. degree in food science and technology from the University of Languedoc, Montpellier, France, and a Ph.D. in food engineering from the University of Lund, Sweden. From 1990-2000  Yasmine was Senior Scientist at the Department of Food Safety at WHO.  She moved to Nestlé in 2000 and was Corporate Food Safety Manager and Assistant Vice-President until 2010 when she was informed that her contract was terminated. Her story was covered on Swiss TV in  May 15 2012 with an enquiry into the court case brought against Nestlé See link to the video   `See also previous Blogs and YouTube above

On the 7th January 2020, the Civil Court of Appeal of the canton of Vaud in Lausanne, Switzerland, condemned Nestlé Group for violating Swiss labour law. (1)

In a strongly worded judgment, the Court found that, contrary to assertions made by Nestlé’s management – and in particular by Mr. Paul Bulcke, President of the Nestlé Group –

Mrs Yasmine Motarjemi was, in fact, psychologically harassed while working for the Nestlé Group in her capacity as former Assistant Vice President in charge of global food safety (Corporate Food Safety Manager from 2000 to 2010).

The Court states that Nestlé’s management took no adequate measures to protect Mrs Motarjemi or to stop the harassment despite the seriousness of the situation and her numerous internal complaints from 2006 to 2010. Moreover, the Court held that Nestlé’s management did nothing to clarify what was happening to Mrs Motarjemi nor did they take any action to stop it, except for a belated and biased investigation three and half years after the harassment started; an investigation the Court found to be a “sham”.

In its written judgment, the Court states that the members of Nestlé’s management were under the influence of the Group’s hierarchy and were, complicit in the failures to protect Mrs. Motarjemi. They never sought to uncover the dysfunctional situation and thus contributed to the violation of the internal regulations of the Nestlé Group to the detriment of Mrs. Motarjemi, but to the perceived advantage of the company’s management.

The Court further confirmed that in failing to take adequate measures, the Nestlé Group did not sufficiently fulfil its duties of care and diligence towards Mrs Motarjemi including all the possible remedies and options available to her.

The Judges of the Civil Court of Appeal of the canton of Vaud concluded the Nestlé Group clearly broke the law for failing to protect the personal and professional well-being of Mrs. Motarjemi from the bullying and harassment she suffered at work. The Court underlined the “underhanded nature of the harassment” by which Nestlé’s management victimised Mrs Motarjemi and the considerable impact it had on her. She has endured “serious moral suffering” due to the length and intensity of the bullying and harassment over many years. In fact, the Court found the actions of Nestlé’s management
destroyed Mrs. Motarjemi professionally and socially, thus “stopping her from a brilliant career”.