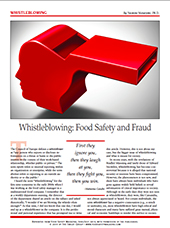 This  is an  excellent article, that should be read by all policy makers reprinted from Food Safety Magazine, June/July2014  by Yasmine Motarjemi.  It makes an important case for supporting, rather than harassing whistleblowers.

From 1990-2000  Yasmine was Senior Scientist at the Department of Food Safety at WHO.  She moved to Nestlé in 2000 and was Corporate Food Safety Manager and Assistant Vice-President until 2010 when she was informed that her contract was terminated.

Her story was covered on Swiss TV in  May 15 2012 with an enquiry into the court case brought against Nestlé See link to the video at: http://www.rts.ch/info/economie/3988696-une-ex-responsable-de-la-securite-alimentaire-depose-plainte-contre-nestle.html

Nestlé and Food Safety: discrepancy between the company’s public statements and actual practices

On May 15 2012, the Swiss TV news bulletin featured an enquiry into the court case brought against Nestlé by a former employee who served as Corporate Food Safety Manager and Assistant Vice-President from 2000 until 2010, when she was informed that her contract was terminated. See link to the video at: http://www.rts.ch/info/economie/3988696-une-ex-responsable-de-la-securite-alimentaire-depose-plainte-contre-nestle.html

In her letter of 4th September 2010, to Nestlé’s CEO, Mr. Brabeck-Lemathe, the former employee explains her concerns regarding management practices in Nestlé, which undermine food safety and her personal experiences of harassment when she tried to improve the situation.  (See attached pdf file)

The TV programme provides examples of serious shortcomings in Nestlé’s management of food safety. In 2003 there were 2 reports of babies in France choking on baby biscuits. The former employee discovered in the company’s files that there were 40 more and her investigations led to changes in the composition of the biscuits. She raised concerns about levels of vitamins and minerals in baby milk, and finally the management set up a working group, but there were no results. In 2005, Nestlé was forced to withdraw baby milks from the market in China because they contained too much iodine.

The attempts by the Nestlé employee to address “the serious shortcomings in food safety management” led to her being fired by the company. From 1990-2000 she had been Senior Scientist at the Department of Food Safety at WHO Headquarters in Geneva. The TV news shows an excerpt from a clip in which a Nestlé manager explains the importance of international recommendations in English to company staff. He tells them that WHO uses complicated and technical language, which he sometimes calls “quack-quack”.

In the TV programme, Dr. Lida Lhotska, who works for a Geneva-based NGO, active in infant feeding and a member of IBFAN, watches the excerpt. Her smile when she sees it is worth a thousand words. She says she is not at all surprised because her experience shows the discrepancy between Nestlé’s statements and their actual practices: what Nestlé declares to the public is not at all the same as what actually happens.

One thought on “Whistleblowing: Food Safety and Fraud”