Update: IBFAN intervention on the GWP  at the Executive Board Meeting in January 201.

IBFAN SUBMISSIONS ON THE DRAFT General Programme of Work

IBFAN comments on WHO’s Safeguarding against possible conflicts of interest in nutrition programmes:_24_9_17

WHO Paper on Safeguarding against possible conflicts of interest in nutrition programmes:trition 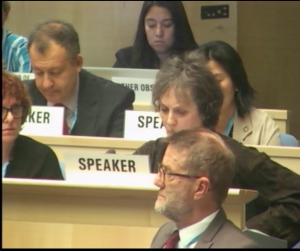 Delivering the  statement on behalf of IBFAN at WHO’s special Executive Board (move to 51.44) 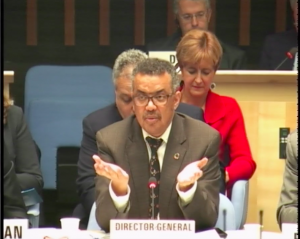 CLICK HERE  for the webcast of the Afternoon session. Page down to the right.

Text  of our statement:

IBFAN welcomes the opportunity to comment on the draft Programme and will focus on WHO’s constitutional mandate and duty to protect the organisation’s independence, integrity and trustworthiness.

IBFAN fears that the draft plan contains suggestions that will undermine WHO’s capacity to fulfill its mandate and core functions. We are pleased that suggestions are still welcome, and hope this EB will allow time for a deeper analysis. This cannot only be about adding suggestions.

We challenge the statement that the SDGs are “consistent with WHO’s Constitution.” The Constitutional principle that the “health of all peoples is ….is dependent on the fullest cooperation of individuals and states.” does not justify turning WHO into an actor, a “humble catalyst” in an “ecosystem of partnerships.” Or that WHO must show its “competitive advantage” to attract funding and be assessed along measurable impact targets.

IBFAN believes that it is risky to use FENSA to enable partnerships – it should be used to manage them and safeguard WHO.

The draft proposes a fundamental change to WHO’s health governance architecture, that will threaten WHO’s capacity to fulfill its constitutional core functions, including:

As a long-standing corporate accountability network, IBFAN is worried that WHO’s role in regulation and norm-setting is being reframed and its mandate to build the international Rule of Law undermined in the keenness to become more ‘operational’. If WHO becomes more ‘operational’ how will the evaluation of impact be protected from undue commercial influence?

Being ‘operational’ opens the door to earmarked funding from the rich and powerful and risks distorting public health planning from prevention to treatment, from sustainable foods to dependence on highly processed foods. Has WHO the capacity to ‘quality assure’ these activities – especially if WHO is in partnership with an interested party?

We fear for the implementation of the International Code of Marketing of Breast-Milk Substitutes and other urgently needed Conventions to tackle marketing and other corporate strategies that harm health. The Plan may leave even more people behind – the very people who will pick up the cost of bad decisions about their healt

To enable WHO to fulfill its constitutional mandate, full funding of WHO must be the agenda of this Special EB. WHO needs to be freed from its dependency on “voluntary” funders imposed by the long-standing freeze on its assessed contributions.