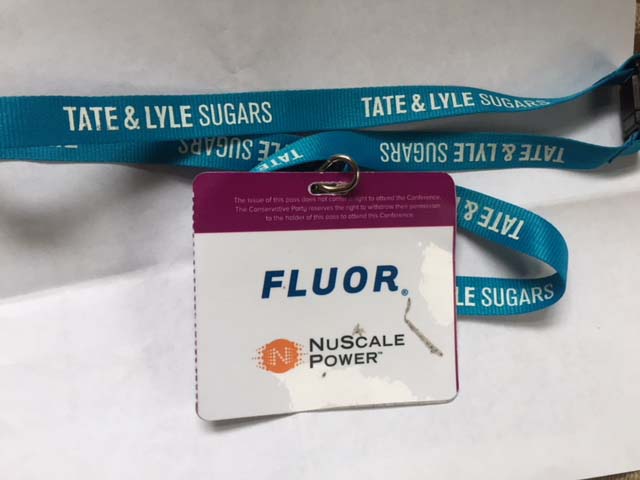 My pass to the Tory Conference sponsored by sugar and nuclear power companies.

Baby Milk Action is not aligned to any political party.

Here are some of the notable things I spotted at the Conservative Conference in Manchester in October.

Sugar and Nuclear power: With hardly any fringe events on health on the agenda, I was still surprised to see that delegate passes were sponsored by sugar giant Tate and Lyleand two nuclear power companies (NuScale Power and Fluor) (Click Here for Morning Star article).

Tobacco Power: Once inside, one of the biggest stands was Philip Morris International (PMI) proclaiming that it is now  a ‘company in transition’ and working towards a ‘smoke free world’.  Click here for my Blog about the Foundation for a Smoke Free World.  I asked the representative if this had been a pitch to get the company’s feet under WHO’s table.  She didn’t exactly deny it – and said that statement from the Framework Convention on Tobacco Control  and  WHO warning Member States to stay clear of the Foundation, certainly put an end to that idea.  She insisted that the Foundation is completely ‘independent’ of PMI even though it is set to receive $80m a year over the next 12 years.  I didn’t make it to the fringe meetings but was told E-cigarettes were being handed out freely. 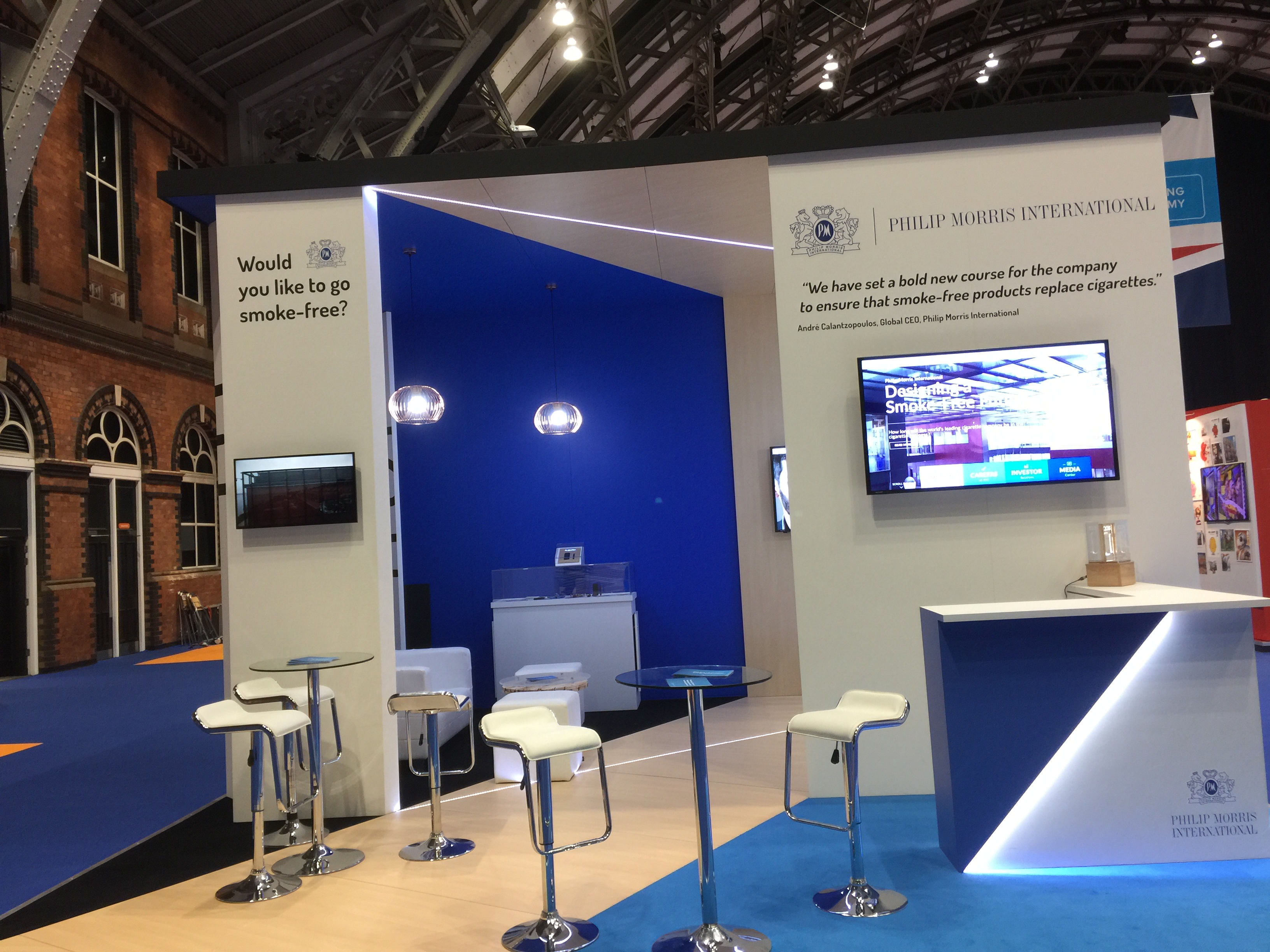 Priti Patel, International Development Secretary,  spoke at the conference  CLICK HERE for all the key speeches and at the Save the Children reception. In her speech she made many promises:  announcing a radical shake-up and clean-up of the market for DFIDs aid contracts; driving out excessive rewards for the consultants and middle-men who implement aid contracts; a tough new Code of Conduct which will lead the way across Government to ensure the highest standards of ethical and professional behaviour by DFID suppliers, with legally enforceable sanctions.    (1) 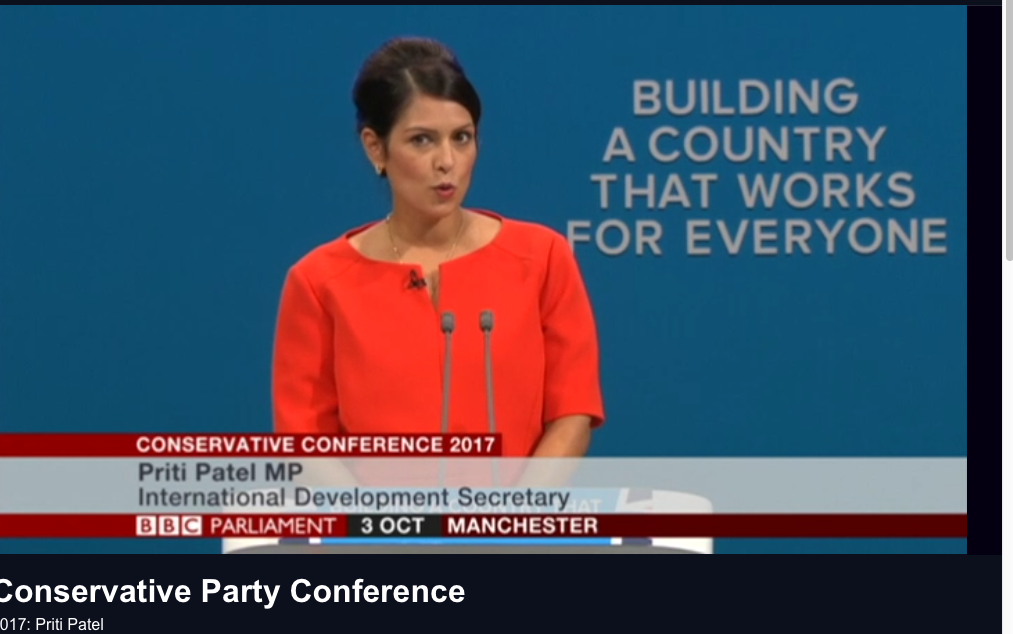 2 Wikipedia on Priti Patel:  ‘During her work at Weber Shandwick, she lobbied on behalf of British American Tobacco (BAT) for several years, with a memo from that company showing that she was employed to “provide strategic advice on the account with a particular focus on the Conservative Party”, billing the company for over £20,000 per month. BAT documents released in 2015 after a legal action indicate that she worked closely on a project to limit the damage to the company’s reputation that its Burmese investments had caused; BAT paid its Burmese factory workers £15 a month, and Patel was paid £165 an hour to counter the negative publicity that the company’s wage agreements generated. One BAT senior executive complained that Weber Shandwick felt uncomfortable about doing such work for a tobacco firm, but noted that “Priti [and another employee] seem quite relaxed working with us”.[14] In November 2000, Patel was part of a strategy group looking at how BAT could influence the outcome of the World Health Organisation‘s negotiations on developing the Framework Convention on Tobacco Control.[15] Patel then moved to Diageo, the British multinational alcoholic beverages company, and worked in corporate relations between 2003 and 2007, shaping “a global strategy on responsible drinking” according to PR Week. On her re-appointment to Weber Shandwick in 2007 Patel was reported as having been in the Corporate Relations team at Diageo Plc, where she “worked on international public policy issues related to the wider impact of alcohol in society.”[16]‘

‘Why do we give aid to India when it has a space programme?’ How to answer difficult questions about aid on the doorstep.

This well attended fringe meeting took place a few hours after Boris Johnson, made his conference speech.  The media has rightly picked up on his comments on Libya. I asked one of the three questions allowed from the floor and n response Boris remembered the front page coverage he got for our campaign to bring in a strong EU Export Directive  in 1992 – at that time he was a Brussels journalist with the Daily Telegraph.  He promised to take our advice on global trade negotiations!