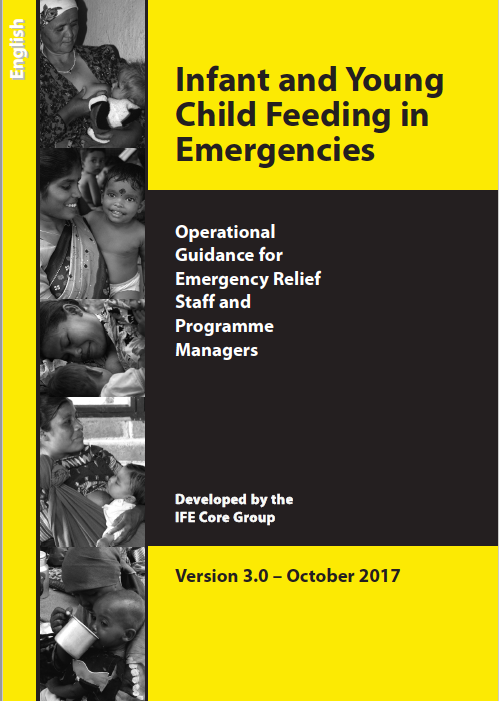 The new, updated Operational Guidance for Emergency Relief Staff and Programme Managers ,  developed by the IFE Core Group is now available.   Version 3  October 2017  (IBFAN is a member of the IFE Core Group)

The Guidance is also available on the ENN website with links to many other important documents:

CLICK HERE for the IBFAN page on Infant feeding in Emergencies.
1. Overview of IYCF-E Coordination and Communications
Save the Children, TOPs, USAID  IYCF-E Briefing for All Aid Workers and Volunteers in Disasters Infant and Young Child Feeding – Why should it Matter to Me? 2. IYCF-E Briefing for All Aid Workers and Sectors (1)
UN urges no formula donations after Philippines Typhoon  CLICK HERE  for Update 46 story
Media messages and the needs of infants and young children after Cyclone Nargis and the WenChuan Earthquake
KG.Media messages after Nargis and Wenchuan
Karleen D. Gribble, PhD Adjunct Fellow, School of Nursing and Midwifery, University of Western Sydney, Australia

and the appeal to the Mexican Health Minister

The Operational Guidance on Infant and Young Child Feeding in Emergencies (OG-IFE) was first produced by the Interagency Working Group on Infant and Young Child Feeding in Emergencies in 2001. This Working Group included members of the IFE Core Group; an inter-agency collaboration concerned with the development of training materials and related policy guidance on infant and young child feeding in emergencies (IFE/IYCF-E, hereon referred to as IFE).
Version 2.0 was produced in May 2006; version 2.1 in February 2007 (with addendum in 2010); and version 3.0 in October 2017 to reflect operational experiences and needs and guidance updates. Version 3.0 update was undertaken by the IFE Core Group in consultation with international, regional and country informants, co-led by the Emergency Nutrition Network (ENN) and UNICEF and coordinated by ENN. The IFE Core Group gratefully acknowledges all those who advised on and contributed to this and earlier editions.
This update of the OG-IFE was made possible by the generous support of the American people through the United States Agency for International Development (USAID).

An international meeting on infant feeding in emergencies was organised by IBFAN in Split, Croatia in October. Members of the UK Infant Feeding in Emergencies Group (IFEG) (including Baby Milk Action, Save the Children and Children’s Aid Direct) joined participants from 23 countries to develop action plans to improve co-ordination between agencies and prevent commercial exploitation. Dr Aileen Robertson, of WHO Europe, used events in Bosnia and Russia to explain how “emergency situations can be public health opportunities” and stressed the importance of protecting local food production. Breastmilk, of course, is the most local food possible. (The UK IFEG report is available in draft form on the Internet at www.tcd.ie/enn/InfantFeedingReport/

Meanwhile the business community is promoting its own view of its role in emergencies. The Business Humanitarian Forum, with an initial budget of US$ 250,000, met for the first time in a luxury hotel in Geneva in January, aiming to “strengthen the ties between the business and humanitarian communities”. Participants included top people from the world’s largest military contractors as well as Nestlé, Rio Tinto, Merck, and several UN agencies and NGOs. Media was strictly excluded “to facilitate open discussions.” (Ref: Gemini News)

One thought on “New Guidance to protect Infant health in Emergencies.”