To be trustworthy Codex standards should be protected from commercial influence 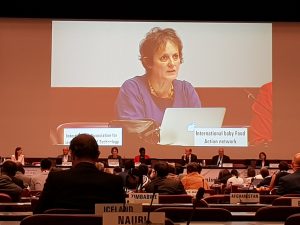 700 delegates attended the 40th Codex Alimentarius Commission in Geneva last week, where for the first time Codex hosted a side event entitled entitled NGOs and Codex: what we expect and what we can contribute.  IBFAN was invited to join the Panel.   Reflecting Codex’ weak Conflict of Interest rules, nearly all the other NGOs were funded by or represented large corporate interests including the food, sugar, supplement and AgriBusiness industries.(2)

IBFAN’s purpose for attending this particular meeting was to help bring the whole Codex process more into line with WHO and FAO policy.  Currently Codex is wide open to undue commercial influence with manufacturers of highly processed foods and supplements and their front groups constituting 40% of  Codex nutrition meetings – sitting on government delegations,  funding dinners and receptions for participants, promoting the findings from industry-funded research.  These giant corporations are responsible for strategies that do so much harm: deforestation, mono-cropping, land and sea grabbing, risky technologies  etc etc.   This largely unacknowledged involvement has a profound  influence on everything that Codex does including the evidence base that is used to decide on the safety of ingredients, additives etc.  (3)

Since 1995 when the World Trade Organisation determined that Codex Standards should be the bench marks in Trade Disputes, IBFAN has attended Codex with  the aim of achieving Policy Coherence between WHO and Codex.  While governments  have the sovereign right and duty to protect health –  the prospect of a legal challenge that its laws are a barrier to trade because they are more trade restrictive than those specified  in Codex is a clear disincentive.  Despite its importance of global health,  trade, sustainable development and farming, Codex is largely overlooked by the media and civil society.

The issue of conflicts of interest and governance came up in many of the topics under discussion, funding of the Codex Trust Fund, the Scientific Basis of Codex, Partnerships for Sustainable development, Anti Microbial Resistance, Alcohol.

In addition to policy coherence with World Health Assembly Resolutions automatically integrated in to Codex standards and processes,  IBFAN is calling for Codex to make a clear distinction between Business Associations (BINGOs) and Public Interest NGOs (PINGOs).

During the meeting Codex elected a new Chair and several Vice-Chairs, including the UK  Food Standards Agency Policy Director, Steve Wearne. The new Chair of the Codex Alimentarius Commission will be Mr Guilherme da Costa of Brazil and the two other Vice-Chairs (in addition to Steve Wearne) Mme Mariam Eid of Lebanon and Prof Purwiyatno Hariyadi of Indonesia.

1 The following were on the Panel list but did not turn up:  European Association of Polyol Producers (Anders Liljegren, President) • European Food Law Association (Nicole Coutrelis, Vice-President) •

3 Codex often refers to ill defined terms often used by industry such as ‘generally accepted’ ‘History of safe use ‘ ‘science­‐based’ ‘scientifically demonstrated’ rather than the terms recommended by WHO: “Relevant convincing / generally accepted scientific evidence or the comparable level of evidence under the GRADE classification ”