“Anita sells out” – that was the front-page headline of the Independent newspaper when Dame Anita Roddick sold Body Shop to L’Oreal in March 2006. 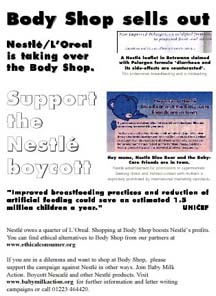 Aside from the concerns over L’Oreal’s record on animal testing and other ethical issues, the cosmetic giant is part-owned by Nestlé, the target of a boycott over its aggressive marketing of baby milks.

While Nestlé’s flagship brand, Nescafé, is the principal target of the boycott all products from which it profits are added to the Nestlé boycott list as a way to increase pressure on the company.

Body Shop was duly added to the boycott list, despite protestations from Anita Roddick, who said at the time:

“I object to the way Nestlé behaves. I am all too aware of their track record on baby milk, GMOs and Ethiopia, you have to have been living in space to not know their reputation.”

“So if you have to bloody boycott – then boycott. Boycott all the products that Nestlé own 100 per cent… But for goodness sake strengthen the arm of anyone who sees an opportunity of changing the black hole of the corporate world.”

Members of the public also demonstrated outside shops, handing out leaflets (above) to alert people to the new owners (below, Bournemouth, UK and Goteborg, Sweden). 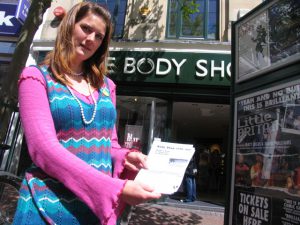 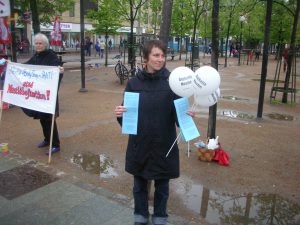 Dame Roddick subsequently transferred the Body Shop shares in the Day Chocolate Company (maker of Divine chocolate) to the Ghanaian farmers’ cooperative that was also part-owner alongside Twin Trading to stop them being transferred to Nestlé after I raised concerns with her.

Dame Roddick’s deal with L’Oreal included a role for her as advisor and she said Body Shop would be a Trojan Horse to change L’Oreal from within, but sadly died in 2007.

L’Oreal is now reportedly selling Body Shop due to disappointing sales. It has not only been abandoned by supporters of the Nestlé boycott, but shoppers suggest it has lost its ethical stance, meaning there is no reason to favour it over other high street retailers.

If and when the sale is confirmed, Baby Milk Action will remove Body Shop from the Nestlé boycott list, as long as there is no residual connection from which Nestlé will profit.

The boycott forces changes in Nestlé marketing practices. For example, prompting the company to drop its claim that its infant formula is the “natural start” for babies (see Boycott successes). However, executives have repeatedly rejected a four-point plan that would save infant lives and ultimately end the boycott.