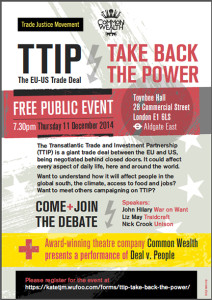 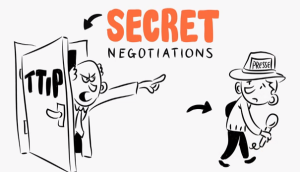 TTIP Take Back the Power flyer 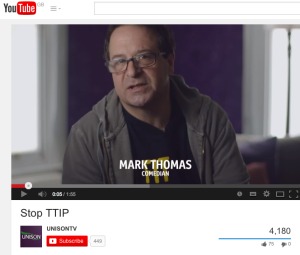 Baby Milk Action is working alongside the growing number of NGOs, Unions and citizens such as War on Want, Trade Justice Movement, WDM and 38 Degrees and 120 organizations from 18 different EU member states, who are all opposing the TTIP negotiations going on between the EU and the USA.   In the UK Baby Milk Action has  attended two meetings with the UK Business, Innovations and Skills Department (BIS).
Baby Milk Action ISDS response
Interesting view from Ralph Nader on the bad  impact of TTIP etc on the US   – 75% of Americans think TPP should be rejected.
“Right now, President Obama probably has the Republican votes in the Senate, but not yet a majority of votes in the House. The vast majority of the Democrats are opposed to the TPP. Tea Party Republicans are reducing Speaker Boehner’s vote count among Republicans. Using history as an example, President Bill Clinton easily peeled off votes during his push for NAFTA. What we need now are a couple of million voters around America to put serious heat on their faltering members of the House and Senate – not that arduous of an effort – over the next few months. That is fewer Americans than watch big league games on television.

In addition, these civic-minded and active Americans would be backed by 75 percent of Americans who think that the TPP should be rejected or delayed, according to a bipartisan poll from the Wall Street Journal. People know what these “pull–down” trade agreements have done to them in their own communities.”

We are explaining how industry lawyers are using bullying tactics and flawed arguments to  try to dissuade  governments from implementing strict marketing controls such as the International Code and Resolutions.  We are reminding the UK Government that it has a duty to protect child health and that TTIP can only make consumer and human and environmental rights protection much more problematic.
CLICK HERE  for  a criticism of a previous Blog and Update 46 – along with our response to that criticism.

CLICK HERE  for a new article,  CONFRONTING THE FORMULA FEEDING EPIDEMIC IN A NEW ERA OF TRADE AND INVESTMENT LIBERALISATION published in the JOURNAL OF AUSTRALIAN POLITICAL ECONOMY No By Julie Smith, Judith Galtry and Libby Salmon

At long last the NGO concerns are prompting  consultations,  petitions, media reports and rallying calls.  Here are some of them:

NO TTIP DAY OF ACTION IN LONDON

European Citizens’ Initiative against TTIP and CETA to start soon

EU: Public consultation on modalities for investment protection and ISDS in TTIP For background papers and instructions for responding  click here or here

The deadline for responses to this consultation has been extended to 13 July due to the level of high interest (14000 submissions).

War on Want response to the above consultation

Download this excellent booklet by John Hilary” The Transatlantic Trade and Investment Partnership: a Charter for deregulation, and attack on jobs, an end to democracy

The Kogan Law Group is a New York City–based firm specializing in ‘identifying and addressing emerging regulatory, policy, and trade risks posed to multinational company assets, operations, and supply chains.’  Kogan, and the ‘non profit’ Institute for Trade, Standards and Sustainable Development (ITSSD – http://goo.gl/0qTBpa) cleverly use selected parts of trade agreements without recognising that governments have sovereign rights and duties to protect health.

Kogan argues that Hong Kong‘s draft code, that covers all products for children below 36 months, is not only trade restrictive, but will not protect breastfeeding. He proposes following the example of Australia, New Zealand and the UK – restricting the scope!   With enough support governments can counter these flawed arguments and bullying tactics and go on to bring in much needed laws, implementing all WHA Resolutions.

2 thoughts on “Stop TTIP – the Transatlantic Trade and Investment Partnership”