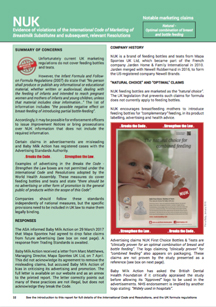 Baby Milk Action has published a profile of NUK bottles and teats in its Look What They’re Doing in the UK 2017 monitoring report. This has led to misleading claims being exposed and a requirement they are not used in future advertising.

As part of the monitoring project, we report suitable cases to the authorities responsible for enforcing the UK law and to the advertising industry’s Advertising Standards Authority (ASA).

Company to remove false claims from future advertising and packaging

One issue is Mapa Spontex, the manufacturer of the NUK brand, markets its First Choice teat with the claim it is “Clinically Proven” for “Combined Feeding”, and encourages breastfeeding mothers to introduce feeding bottles from as early as one week of age. Advertising referenced a study suggesting this proves the teat enables “optimal combination of breast and bottle feeding”.

Baby Milk Action investigated and found the study found no such thing. The First Choice teat was the only one involved in the study, so there is no basis to claim it is “optimal” or the “First Choice”.

The title of the study is, “Mechanics of sucking: comparison between bottle feeding and breastfeeding” (although this was not given alongside the reference in the NUK advertising). The study found babies suck differently on the NUK teat and at the breast. There was no investigation of the impact of this on lactation.

The ASA responded to two of our complaints on 29 March 2017 as follows:

We have now resolved the case with the advertiser. They have agreed to remove the study from their advert and will no longer use the phrase “Clinically proven.” We have decided that this is sufficient to resolve the matter informally and we have now closed the case. As I mentioned before, the name of the advertiser will appear on our website in a list of advertisers who have worked with us to amend their advertising. Mapa Spontex will appear on the list on 5 April 2017.

The entry was delayed due to 12 April due to a technical fault. The full extent of the ASA’s notification that the NUK claims are misleading and cannot be repeated is the following.

This is a great concern as the false “Clinically Proven” for “Combined Feeding” claim also appears on packaging for the NUK teat, which is outside the remit of the ASA. We have tried to persuade the ASA that it is in the public interest to publish its findings, but it refused to do so. The ASA has also refused to share the agreement it made with Mapa Spontex not to publish a ruling if it promised to drop the false claims.

We sent Trading Standards our report and it informed us on 28 April 2017 that it had discussed this with Mapa Spontex will remove the “Clinically Proven” statements from its product packaging. Trading Standards will not be taking any further action.

The ASA refused to investigate the claim implicit in the “First Choice” name, saying this was permitted “marketing puffery”.

Baby Milk Action recommends that mothers who wish to introduce feeding bottles look to independent information from NHS Choices and mother support groups as these provide facts on the possible impact on breastfeeding of introducing bottles and how best to do so. See NHS Choices:
http://www.nhs.uk/Conditions/pregnancy-and-baby/Pages/combining-breast-and-bottle.aspx

Please donate if you would like Baby Milk Action to continue monitoring the baby food industry and holding corporations to account for breaking marketing rules.

Baby Milk Action sent the NUK company profile to Mapa Spontex on 23 March 2017. We received a response on 7 April and we are posting it in full below today on 8 April as the company’s right to reply.

The company makes no reference to its agreement with the ASA to drop the false claims from its advertising and we responded immediately suggesting that it may wish to do so.

The letter also criticises Baby Milk Action for bias, failing to acknowledge our role it to protect breastfeeding and to protect babies fed on formula.

If a mother decides to use feeding bottles and teats, we believe she has a right to accurate information and should not be subjected to false advertising claims.

The response from Mapa Spontex is given below in its entirety.

Thank you for your mail of March 24 and the opportunity to comment on Baby Milk’s website on the NUK brand.

Whilst we appreciate that the aim of your organization is to protect breastfeeding with all means, we do feel that your interpretation of NUK’s activities and brand communication do not do us or the many women that rely on our products every day justice. What’s more, we are convinced that this one-sided approach does not further the legitimate cause of promoting breast feeding.

The reality we see is that a mother’s intention to breastfeed her child may be challenged for different reasons every day. NUK products are not directed against a mother’s choice to breastfeed, but are designed with the realities and obstacles to breastfeeding in mind, thus allowing parents to combine breast feeding and bottle feeding by use of products suitable for combined feeding, when necessary. The NUK brand has a strong and consistent history of investing in research to provide mothers with an appropriate product helping them to relieve their breastfeeding problems and simplifying their everyday routine.

At no point we have suggested that NUK products should replace breastfeeding, medical breastfeeding aids or any other breastfeeding aids. On the contrary, the NUK website expressly indicates that breastfeeding is the best for babies and outlines the benefits of breastfeeding. In addition, we explain how the breastfeeding process works, as NUK strongly believes that mothers should be fully informed before making their decision as to how they want to feed their babies. That’s why we even warn mothers of the possible negative effects on breast feeding of introducing bottle feeding and the difficulty of reversing the decision not to breastfeed. In addition, our website encourages mothers who encounter difficulties to seek the assistance of medical aid, such as midwives and pediatricians.

In addition, the claims below that you question are in fact fully substantiated and compliant with UK law:

You further indicate that our claim that the NUK teats mimic the shape of the mother’s nipple during breastfeeding breast is contradicted by our statement that breastfed babies may be reluctant to bottles. It is perfectly logical that babies who are entirely breastfed may need a transition to adapt to an alternative way of feeding, no matter how close it is to the shape of the mother’s nipple. This is fully in line with our above-mentioned statement that bottle feeding is not a breastfeeding substitute, but a complementary way to feed Babies.

To the extent that you interpret the claim “reduces the risk of colics” to undermine breastfeeding, you will not be surprised we do not agree. The claim “reduces the risk of colics” clearly refers to the fact that NUK bottles have a specific system preventing an air vacuum and thus the swallowing of the air while bottle feeding. This system enables a relaxed drinking and creates a regular flow, reducing the potential risk of colics as it is recognized swallowing air whilst eating can be a cause for colics which may occur with bottles that do not have a similar system. Therefore, we disagree with your view that our claim undermines breastfeeding.

Although we are aware of Milk Action’s open bias to breastfeeding, and that you will therefore consider any advertisement relating to bottle feeding to be “undermining breastfeeding”, we do expect you to communicate to consumers in a professional and non-misleading way. Your article on NUK may influence parents in a misleading and unfair way and does not meet the standards you are so adamantly demanding NUK to adhere to.

Accordingly, reserving all rights, we kindly ask you to correct the article in order to give a fair and balanced view on our products, company and brand.

We are looking forward to discussing this in more detail with you.

Baby Milk Action has asked Mapa Spontex to provide further information on where it warns mothers of the possible negative effects on breast feeding of introducing bottle feeding and the difficulty of reversing the decision not to breastfeed as this was not found on its website, advertising or packaging, certainly not in the same location as the false claim that the First Choice teat is “clinically proven” for “optimal combination of breast and bottle feeding” nor alongside advise to introduce feeding bottles by 6 weeks of age at the latest.

Pending that information, we see no need to change our profile on NUK, other than to acknowledge that Mapa Spontex has responded, that the ASA has agreed with our analysis of the misleading claims and that the company, according to the ASA at least, has agreed not to repeat them in advertising.