The UN Committee on the Rights of the Child has issued its concluding observations on the UK after assessing how well the government is meeting its obligations under the Convention on the Rights of the Child. For the third time running it has called on the government to fully implement marketing requirements for breastmilk substitutes. Its report highlights the Committee’s concern with the:

“Extremely low rate of breastfeeding, and only one percent of women maintaining exclusive breast feeding for six months in 2010, and inadequate regulation of marketing of breastmilk substitutes.”

It recommends the Government:

“Promote, protect and support breastfeeding in all policy areas where breastfeeding has an impact on child health, including obesity, certain non- communicable diseases, and mental health, and fully implement the International Code of Marketing of Breastmilk Substitutes.” 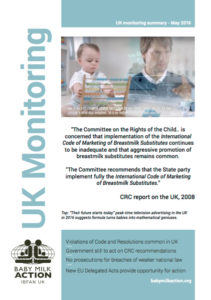 These findings and recommendations come after the UK member of the International Baby Food Action Network (IBFAN), Baby Milk Action, submitted a civil society report to the Committee with results from its monitoring of the baby food industry (left) and preliminary findings and recommendations from the World Breastfeeding Trends initiative assessment of the UK. This was presented to the Committee by IBFAN-GIFA, based in Geneva.

Baby Milk Action’s monitoring provides evidence of systematic violations by companies in the UK, led by Danone (owner of the Cow & Gate and Aptamil brands) and Nestlé (owner of the SMA brand), and retailers such as Tesco and Asda.

“We welcome the recommendations from the Committee on the Rights of the Child calling for the Government to better promote, protect and support breastfeeding and regulate the formula industry. Most mothers in the UK say they did not breastfeed for a long as they wished. The Committee already called on the Government to implement the International Code of Marketing of Breastmilk Substitutes in its 2002 and 2008 report and has done so again in 2016. We hope the government will reflect on the shameful record of the UK and take prompt action.

“The Committee also calls on the Government to improve data collection relevant to breastfeeding after the Government cancelled the National Infant Feeding Survey in 2015 – the survey had been conducted every five years since the 1950s. Data from past surveys was used in the Government’s own submission.”

Baby Milk Action made a presentation to the All Party Parliamentary Group (APPG) in the UK Parliament on 17 May on the need to implement the International Code and subsequent, relevant Resolutions of the World Health Assembly. This Parliament has the ideal opportunity to improve regulations as a Statutory Instrument is currently being prepared to implement new EU Regulations relating to formula marketing. See our presentation: Mothers need support not pressure at: http://archive.babymilkaction.org/scrolling/en/appgmay16.html

This includes the monitoring report pictured above, adapted to highlight action MPs can take.

The call for better regulation of formula companies comes as FTSE, the stock exchange listing company, took further action to whitewash companies in the sector. Danone announced on 7 June that it will be added to FTSE’s ethical investment index, FTSE4Good. Nestlé is already included in FTSE4Good and uses this to divert criticism of its aggressive marketing practices in the UK and around the world.

“FTSE has once again dealt a serious blow to those of us trying to stop baby food companies putting their own profits and sales before the lives of babies. Companies such as Danone and Nestlé are not included in any credible ethical investment initiatives due to their systematic violations of marketing standards. Looking at how Nestlé claims its formula “protects” babies or at how Danone suggests its formula turns them into mathematical geniuses shows these companies treat the marketing rules with contempt. Baby Milk Action, Save the Children and other experts have called on FTSE to strengthen its criteria, but it has instead progressively weakened them with the stated purpose of bringing more companies into the index.

“FTSE allows organisations with substantial investments in the sector to sit on its Breastmilk Substitutes advisory committee. Anyone concerned about child rights should not be duped by FTSE4Good and the baby food companies it whitewashes. If you want to see real change then back this latest call from the Committee on the Rights of the Child for stronger regulation and Baby Milk Action’s monitoring and campaigning activities that helped to bring it about.”

The advanced version of the UN Committee on the Rights of the Child report has been posted by the Children’s Rights Alliance for England (Baby Milk Action is a member and also submitted evidence in the CRAE report to the Committee):
http://www.crae.org.uk/media/93148/UK-concluding-observations-2016.pdf

The section on Nutrition states:

65. The Committee is concerned about the:

(a) High prevalence of overweight and obesity among children in many parts of the State party;

(b) Lack of comprehensive data on child food security, while some research indicate that currently available programmes, such as free school meal programmes, may not be effectively responding to child hunger;

(c) Extremely low rate of breastfeeding, and only one percent of women maintaining exclusive breast feeding for six months in 2010, and inadequate regulation of marketing of breastmilk substitutes.

66. The Committee recommends that the State party:

(a) Systematically collect data on food security and nutrition for children, including those relevant to breast-feeding, overweight and obesity, in order to identify root causes of child food insecurity and malnutrition;

(b) Regularly monitor and assess effectiveness of policies and programmes on food security and nutrition of children, including school meal programmes and food banks, as well as programmes addressing infants and young children;

(c) Promote, protect and support breastfeeding in all policy areas where breastfeeding has an impact on child health, including obesity, certain non- communicable diseases, and mental health, and fully implement the International Code of Marketing of Breastmilk Substitutes.

Baby Milk Action also submitted a report in the name of IBFAN to the UN Committee on Economic, Social and Cultural Rights.

The Concluding Observations from the Committee includes in the Right to Food section :

This should include policies in support of breastfeeding in accordance with the resolutions of the World Health Assembly, including through breastfeeding breaks or breastfeeding facilities in educational institutions and workplaces.

The Committee also recommends that the State party introduce higher taxes on junk foods and sugary drinks and consider adopting strict regulations on the marketing of such products, while ensuring improved access to healthy diets.

The Committee refers the State party to its general comment No. 12 (1999) on the right to adequate food and the Voluntary Guidelines to support the progressive realization of the right to adequate food in the context of national food security, adopted by the United Nations Food and Agriculture Organization, as well as to the International Code for Marketing of Breast-milk Substitutes.