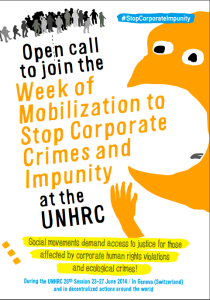 Organisations and individuals can view the statement and sign up here.

In June this year, countries from around the world will come together in Geneva for the 26th Session of the Human Rights Council (10 – 27 June 2014). At this session some countries will be calling for the UN to begin developing an international treaty on business and human rights. These calls are part of an international Treaty Alliance formed to prevent corporate human rights abuses. This Alliance is calling for a treaty that would have countries monitor and regulate corporations under their control, provide access to justice and accountability for those impacted by corporate human rights abuses, as well as develop an international mechanism that can, when needed, hold corporations accountable outside the national court system. 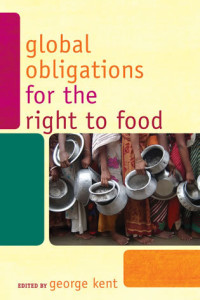 Baby Milk Action was a member of the UN System Standing Committee on Nutrition Task Force on Global Obligations for the Right to Food. In the book produced by the Task Force, it highlighted that under existing human rights norms nation states have a responsibility to take collective action to hold corporations accountable for abuses of human rights and environmental standards. It proposed various methods by which this could be achieved through existing or new international institutions, as well as approaches to compel national governments to hold their corporations to account for their practices anywhere in the world.

As part of the International Baby Food Action Network (IBFAN), Baby Milk Action has over 30 years of experience in monitoring corporations against marketing standards adopted through the UN system: the International Code of Marketing of Breastmilk Substitutes and subsequent, relevant Resolutions of the World Health Assembly. There is no binding mechanism at the global level to hold corporations accountable for violating these measures.

Parents have the right to accurate, independent information, however they decide to feed their children. This should be from health workers who maintain their independence from companies with a vested interest in selling products. Babies fed on breastmilk substitutes are more likely to become sick than breastfed babies and, in conditions of poverty, are more likely to die. Those who use breastmilk substitutes have a right to accurate information on reducing risks. Globally, 800,000 under-5 deaths could be prevented every year through improved breastfeeding.

Questioned on the findings of systematic violations by Baby Milk Action at the Nestlé shareholder meeting on 10 April 2014, the response from the Nestlé Executive Board was that 90% of the violations are in line with Nestlé’s policies, demonstrating both the company’s failure to bring these into line with the requirements and the intention of executives to continue with practices that mislead parents and put babies at risk.

Left: Nestlé defends promoting its formula with claims it is the ‘natural start’, the ‘gentle start’ and ‘protects’ babies. See poster with other examples.

The International Code requires companies to ensure their practices at every level comply with its provisions independently of any other measures. However, most ignore this as a matter of policy, stating they follow national implementation, and then work to weaken national measures. At present, there are only civil society campaigns such as the Nestlé boycott and DanoNO campaigns to hold these companies to account when governments fail to do so. An international mechanism is long overdue.