The Community Practitioners and Health Visitors Association (CPHVA) is a member of the Baby Feeding Law Group (BFLG), which works for the baby feeding industry to be better regulated. It is worrying to see it being targeted by Nestlé and Danone, the world’s largest and second largest baby food companies.

Nestlé entered the UK market in 2012 with the takeover of the SMA brand and marketing strategies have become noticeably more aggressive. Nestlé has recruited a network of “Clinical Representatives” with a job description giving their main responsibility as obtaining “brand endorsement” from health workers.

Nestlé and Danone are engaged in aggressive competition around the world. Danone is rivalling Nestlé as the source of most violations of the World Health Assembly marketing requirements detected in monitoring by the International Baby Food Action Network (IBFAN). As examples, Nestlé promotes its formula around the world claiming it “protects” babies, even though executives know they are more likely to become sick than breastfed babies and, in conditions of poverty, more likely to die. Danone’s Dumex subsidiary has been exposed bribing health workers to promote formula in China.

In the UK, Baby Milk Action has won cases against Nestlé SMA and Danone Nutricia at the Advertising Standards Authority (ASA) proving they have made misleading claims.

Below, a new low for Nestlé in August 2015 : a street stall promoting Cerelac and SMA brands to the public.

Below, misleading claims about Nestlé SMA toddler milks – complaint upheld by the ASA.

Members of BFLG are committed to bringing UK baby food marketing laws into line with international marketing standards, specifically the International Code of Marketing of Breastmilk Substitutes and subsequent, relevant Resolutions of the World Health Assembly (the Code and Resolutions). They do not have to be fully compliant with the Code and Resolutions themselves to be admitted as members, but do have to be working towards this end. This has seen the Royal College of Midwives, for example, remove formula advertising from its journal and formula company stands from its conferences.

It is troubling to see that CPHVA seems to be taking a step backwards as it comes under pressure from Nestlé and Danone. Its forthcoming conference (17 – 18 November 2015) has speakers who are “supported by Nestlé” and “supported by Danone Nutricia”.

By contrast, the Institute of Health Visiting (iHV), which has a clear statement in a section on relationships with commercial companies on its website under ‘About Us’: http://ihv.org.uk/about_us/ihv_and_commercial_companies

The iHV would like to make clear that we do not, and will not take any form of funding or sponsorship from companies covered by the International Code of Marketing of Breast Milk Substitutes.

One of the company-sponsored events at the CPHVA Conference involves Professor Alan Lucas. Prof. Lucas has been linked to the SMA brand since at least 2003 when he was part of the defence team that unsuccessfully defended previous owners Wyeth in a criminal prosecution. Wyeth was convicted of a “cynical and deliberate breach” of the Infant Formula and Follow-on Formula Regulations and fined for advertising infant formula.

Prof. Lucas has opposed the World Health Organisation recommendation for exclusive breastfeeding to 6 months. Baby food companies undermine the recommendation by promoting complementary foods for use from an earlier age. His talk on breastfeeding and optimum nutrition is supported by Nestlé, which bought the SMA brand from Wyeth’s parent company in 2012.

The exhibition at the CPHVA conference includes not only Nestlé and Danone, but other formula companies: Abbott, Hipp and Mead Johnson. The Danone-funded Infant and Toddler Forum is also present.

There is a self-evident conflict of interest in having companies with a vested interest in promoting products supporting speakers and exhibiting at health worker events. While formula companies are permitted under the Code to provide scientific and factual information on products to health workers, such support is rarely confined to this. In many cases company information is found to be misleading – proven by the cases Baby Milk Action has won at the ASA – and the sponsorship invariably influences  agendas and  topics for discussion. 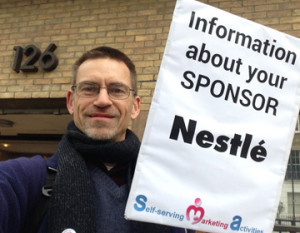 Many health facilities prohibit company representatives meeting with health staff. Nestlé, Danone and Hipp are trying to bypass these restrictions by organising their own study days at nearby venues and sponsoring and exhibiting at health worker events. Baby Milk Action has been handing leaflets arriving at these events.

Independent sources of information are available from organisations such as the First Steps Nutrition Trust. Community practitioners and health visitors do not need to compromise their independence by looking to formula companies and their speakers for support and information.

The Guardian newspaper recently concluded it made a mistake to have Danone sponsor a roundtable discussion and article. Will CPHVA do the same?