Update 16 May 2014: Danone is now the target of the DanoNO campaign for failing to deliver on its promises.

Baby Milk Action will be joining partners in the International Baby Food Action Network (IBFAN) in Geneva on 12 May to present the latest global report on baby food company marketing practices.

The Breaking the Rules, Stretching the Rules 2010 monitoring report has examples of violations from 46 countries. There are profiles of 11 leading baby food companies, with market leaders Nestlé and Danone responsible for many of the violation examples included.

The report is compiled by our partners in the International Code Documentation Centre (ICDC) and it will be interesting to hear their presentation of the evidence they have sifted through to compile the report. 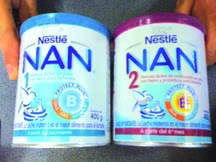 The difference in response to this and past reports by the leading two companies has already struck me. Nestlé issued a response to the report last week suggesting that remedial action is required for just 4 out of 130 violations it has counted in Breaking the Rules 2010 – in other words it plans to continue with 97% of the examples given.

Left: Nestlé claims its formula ‘protects’ babies with colourful logos such as on this example from Chile in 2010. Nestlé has rolled out labels with these claims in 120 countries even though it knows that babies fed on formula are more likely to become sick than breastfed babies and in conditions of poverty, are more likely to die. Baby Milk Action has been in correspondence with Nestlé about the logos, as with many other violations, and it is refusing to remove them in line with the provisions of the International Code of Marketing of Breastmilk Substitutes, adopted by the World Health Assembly in 1981. Article 9.2 of the Code is very clear that there must be no: “pictures or text which may idealise the use of infant formula. They may, however, have graphics for easy identification of the product as a breastmilk substitute and for illustrating methods of preparation.” Claiming the products ‘protects’ in a colourful logo does not fit within allowed images. Thousands of people have sent Nestlé emails. Nestlé says its discontinued one of the cases we highlighted (a leaflet claiming its formula is ‘The new “Gold Standard” in infant nutrition’), but it will take more pressure to persuade it to drop these logos.

Danone, on the other hand, promised a ‘root-and-branch’ review in response to Breaking the Rules 2007 report as it had just taken over NUMICO brands (Nutricia, Milupa and Cow & Gate). As we reported in our Update 43 newsletter at the end of last year, things appeared to have got worse, not better, in the 2010 report. However, Danone has assured us that the action it has taken will stop 50% of the violations in the report and it gave an undertaking last month to take action on other issues.

For example, Danone has pledged to remove the Immunofortis claims we highlighted in Update 43 (shown left) from all formula labels in all countries. We need further details – for example, shields and polar bears are not permitted under Article 9.2 either and should also go.

We also want to see action on the other 50% of violations, but it is welcome that Danone acknowledges it needs to make changes. If it goes further, perhaps it will escape a consumer campaign.

The Breaking the Rules, Stretching the Rules 2010 report is available via the IBFAN website.

So on their own assessments, Nestlé is taking ‘remedial action’ for 3% of the violations shown in its profile, while Danone has already acknowledged 50% are violations and said it has taken action that will stop them, plus has made several other specific undertakings to stop other practices highlighted. Both could and should do better. Nestlé couldn’t really do any worse.