The Consequences of Free Trade 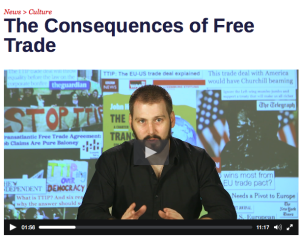 Richard Seymour picks apart the controversial deal, and harshly criticizes the international media for the lack of comprehensive debates, which includes public discourse.This content was originally published by teleSUR at the following address: http://www.telesurtv.net/english/news/The-Consequences-of-Free-Trade-20150618-0050.html. If you intend to use it, please cite the source and provide a link to the original article. www.teleSURtv.net/english 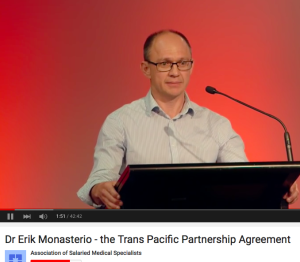 The Transatlantic Trade and Investment Partnership (TTIP) would dwarf previous free trade deals. The European Commission estimates that by 2027 it could boost the size of the EU economy by €120bn (£94bn; $152bn) – equal to 0.5% of GDP – and the US economy by €95bn (0.4% of GDP).  European opponents argue that TTIP risks watering down EU regulations in the drive to remove trade barriers.

There are tensions over TTIP in the European Parliament, whose draft recommendations proved too controversial for MEPs to vote on it this week. What divides the EU and US on food safety?

Authorisation of chemicals faces a big hurdle in the EU – the so-called “precautionary principle”. It demands that politicians base a risk assessment on more factors than existing scientific data, in cases where there is scientific uncertainty.

The US approach puts the onus on authorities to prove that a particular chemical is hazardous before imposing a ban. Where no such scientific data exists, the US argues, companies should be free to sell their product.

These contrasting positions mean that the EU and US disagree over maximum residue levels (MRLs) – the measure of pesticide residues allowed in food.

The US trade representative’s report complains that “frequently… no EU MRL has been established, or the EU MRL is set at a level that is too low”.

But in Europe there are fears that TTIP might bypass the European Food Safety Authority (Efsa), by obliging the EU and US to follow higher chemical residue levels set by the Codex Alimentarius Commission, an international food regulator.

“The Parties shall ensure that tolerances and maximum residue levels adopted by the Codex Alimentarius Commission after the entry into force of this Agreement will be applied by each Party without undue delay, unless the importing Party had signalled a reservation in the Codex Alimentarius Commission. Such tolerances and maximum residue levels shall apply between the Parties within 12 months after their adoption.”

Bart Staes, a Belgian Green MEP and negotiator on TTIP, says Efsa has opposed up to half of the Codex standards in recent years.

The European Parliament’s environment committee reports that 82 pesticides used in the US are banned in Europe.

The EU took nearly 10 years to hammer out the REACH system for registering chemicals – a system that met with “fundamental and sustained opposition” from the US, the committee says.

A big row has erupted over endocrine-disrupting chemicals (EDCs), which interfere with the body’s highly sensitive hormone system. Studies point to EDCs causing reproductive problems and they have been linked to certain cancers.

Even tiny amounts of EDCs pose particular risks to unborn children and infants, experts warn. But much research remains to be done.

Controversially the European Commission has delayed setting EU criteria for defining EDCs, until 2017 at the earliest. Sweden has reacted by taking the Commission to court, accusing it of breaking a pledge to issue the criteria by the end of 2013.