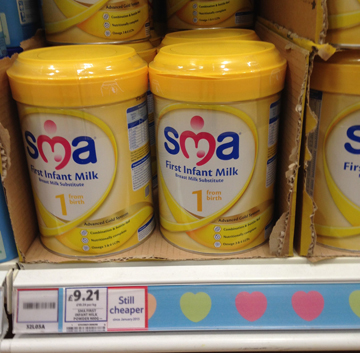 Update 25 February 2015: No legal action likely over breaches of criminal law. Tesco’s primary Trading Standards authority speaks to Baby Milk Action – see the post: What happened to your reports of Tesco breaking the law in the UK?

Update 13 February 2015: We had reported that Tesco promised a shake up of its marketing practices after being challenged over illegal formula promotion in its stores. Sadly, we have to report that a month after Tesco said it had ‘requested’ managers remove the promotion it was still being found. Not only that, staff installed the promotion in the Tesco Kinson store (below), which only opened to the public on 29 January, three weeks after Tesco claims to have cancelled the promotion (Tesco says it has now been removed). We continue to receive reports of point-of-sale infant formula promotions in other stores. Please keep sending us information. 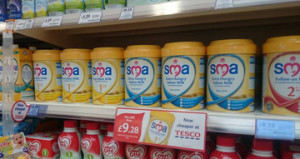 Promotion in Tesco on 8 February –
a month after Tesco says it took ‘immediate steps to remove the promotion from stores’.

Reports are now coming in of Tesco switching tactics – changing the price discount promotional shelf talkers to ones restricting sales to two per customer. Why do supermarkets ration formula?

After nearly three weeks of asking – and a campaign on Twitter – Tesco has finally answered Baby Milk Action’s questions about an illegal promotion for Nestlé SMA formula in its stores. Tesco’s Senior Legal Counsel has also promised that new guidance will be issued to marketing teams to prevent a repeat.

Thank you to everyone who contacted us and Tesco. If you want to help monitor, see our monitoring page.

When people around the UK came to us about a prominent promotion for Nestlé SMA infant formula in Tesco in January 2015, we contacted the company. Parents require independent advice on infant feeding and promotion of formula is prohibited – companies have a vested interest in boosting sales. We found this strange. Why did Tesco need the public to draw its attention to what was happening in its own stores?

As we expected Tesco to say the illegal promotion was a mistake, as in the past, so we had already asked it to explain:

As the product was Nestlé SMA infant formula, we also asked, ‘Can you also comment on the involvement of Nestlé executives in this promotion?’

Tesco assured us it had asked store managers, ‘to support removal of the relevant material’. And said, ‘We will continue to monitor compliance with our requests to remove this material.’

That seemed a rather relaxed approach to stopping what in law is criminal activity. We continued communicating with Tesco and it said its Legal team would be in touch.

On 23 January we were contacted by Tesco’s Senior Legal Counsel for Brands, Innovation and Marketing. But, again we were told, ‘we cannot share commercially sensitive information publicly. However, I can assure you that we acted swiftly to remove the material from stores once this matter came to my attention on 8th January’.

Not that swiftly, given we had more photos arriving showing managers were not acting on the ‘request’ to remove the promotion. And we still had no word from Tesco about what it would do to stop a repeat.

We were keeping people informed of developments through Twitter and Facebook. We asked people to re-tweet our plea for Tesco to answer the questions and highlighted the campaign on our ‘One thing you can do this week‘ page.

Caroline Lucas MP was one of those who re-tweeted.

Companies spend a fortune promoting infant formula in the UK – and they break international marketing standards when they do so. In this particular case, they were also breaking the narrower UK law, the Infant Formula and Follow-on Formula Regulations (2007). Paragraph 23 states:

This was exactly what Tesco was doing by promoting a price drop. Three weeks after Tesco had ‘requested’ managers remove the promotion, we received evidence of promotions in Macclesfield (below) and Aylesbury.

Note, there is nothing to stop Tesco – or Nestlé – introducing permanent price reductions. In fact, we are campaigning for companies to abide by the rules, stop all promotion and cut the price of formula permanently. Formula is over-priced and has one of the highest mark-ups on the supermarket shelves.

These in-store promotions are marketing strategies: sell a product at a price for a period, then drop the price and use this for a short-term marketing blitz.

Tesco did exactly the same in September 2011, when it promoted SMA formula with a ‘Big Price Drop’ campaign (below). Then too, Tesco said it was a mistake. 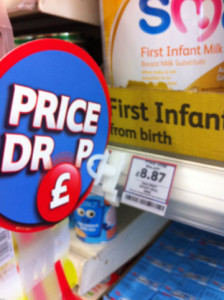 Just one peak time television advertisement on ITV costs a formula company £60,000. Promotional campaigns may cost £3 million. Since Nestlé took over the SMA brand in 2012, it has recruited a national network of sales representatives (it calls them Nutrition Representatives). Most health facilities only permit companies to provide scientific and factual information to a designated expert for assessment so Nestlé is hiring nearby hotels and trying to entice health workers to go to its events off site.

Who pays for all this promotion? People who buy formula.

And much of it is misleading. For example, we have won cases at the Advertising Standards Authority (ASA) over claims made for SMA milks.

In 2009, Tesco promoted SMA infant formula in its in-store catalogue, undermining breastfeeding with the suggestion: ‘Feed you baby the healthiest nutrients with our new & in demand handy pack sizes’.

Tesco’s response in 2009? ‘Please let me assure you that this was an inadvertent mistake, which we responded to as quickly as possible…. As I am sure you will appreciate, we cannot re-call our catalogues.’

Break the law. Call it a mistake when challenged. Repeat.

That’s not good enough. Which is why we wanted to know what Tesco would to do stop yet another ‘mistake’.

There appears to be some confusion over the responsibility for the promotion. I can confirm that this was a Tesco-led promotion. The promotion came to the attention of our Customer Services team 8th January. They, along with a number of other internal teams, escalated this matter to me immediately and the first communication to stores was sent that afternoon.

I confirm that Nestle had no involvement in the promotion. Furthermore, Nestle were not aware of the promotion before it launched on 8th January.

To address your concern that we only “requested” that stores remove the material, we always communicate with colleagues in a polite and professional manner. However, for clarity, each of the communications sent to stores included (i) an explanation that we are not legally allowed to promote infant milk formula; and (ii) an instruction to remove the relevant point of sale material. In addition, our communication to regional Store Directors confirmed that it is critical that we don’t in any way promote infant milk formula.

It is disappointing that you have found some ongoing incidents of non-compliance at particular stores and I apologise for that. Our Macclesfield and Aylsbury stores were contacted directly about this yesterday and I understand that the material has been removed.

To facilitate ongoing compliance, a further communication will be sent to stores via our weekly Point of Sale instructions next week.

What we are doing to prevent a repeat

To facilitate future compliance generally, I have spoken personally to our relevant teams to clarify the requirements of paragraph 23 of the Infant Formula and Follow-on Formula Regulations (2007). Written guidance on the regulation will be circulated to them early next week.

Finally, we have discussed this matter with our Trading Standards Authority who are aware of the steps we have taken to remove this material from stores and the preventative action we will take going forward.

We have asked Tesco to confirm that the internal guidance that Tesco will circulate will take as a minimum standard the interpretation of the law set out in the Guidance Notes issued by the Department of Health.

We have also asked Tesco to confirm its internal guidance will comply with the International Code of Marketing of Breastmilk Substitutes and subsequent, relevant Resolutions of the World Health Assembly. Article 11.3 states:

‘Independently of any other measures taken for implementation of this Code, manufacturers and distributors of products within the scope of this Code should regard themselves as responsible for monitoring their marketing practices according to the principles and aim of this Code, and for taking steps to ensure that their conduct at every level conforms to them.’

Baby Milk Action also reported these promotions to Trading Standards via the system contracted out to Citizens Advice Bureau. We received an acknowledgement this has been passed on, but have still not had any response from Trading Standards itself.

The Regulations come under the responsibility of the Department of Health, but it does not take a strong line in enforcing the regulations and its Guidance Notes on putting the law into practice are widely disrespected. At the same time, Tesco and Nestlé are listed as ‘partners’ in the Department of Health’s Change4Life health education initiative.

We will continue monitoring the situation and welcome all the reports we receive.