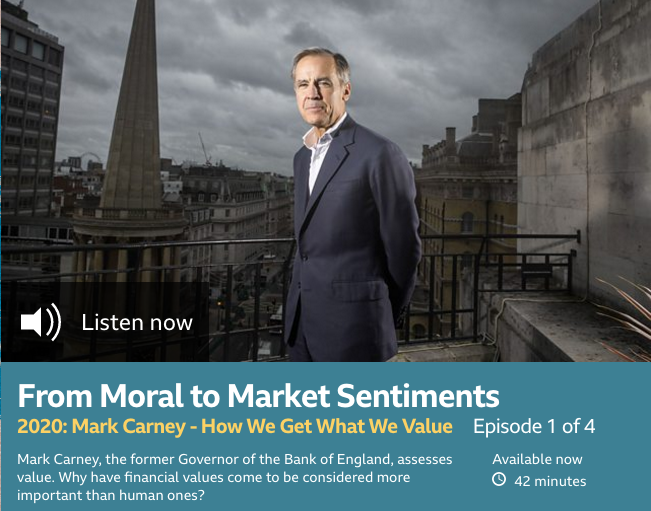 The 2020 Reith Lectures, aired on BBC Radio 4 in December, were inspiring and enlightening on many levels. However we were surprised to hear Dr Carney, UN Special Envoy for Climate Change and Finance, praising Danone as an example of an ethical company that “‘has totally re-oriented itself and shifted along that continuum towards re-balancing purpose and profit.”

We felt the praise was unjustified and that we should write to him to let him know why.

Reith Lecture 2020 ‘How We Get What We Value.’   Is Danone really a good model to follow?

We are writing on behalf of the International Baby Food Action Network (IBFAN), the 40-year old global network of 270 citizens’ groups who work in over 160 countries to protect breastfeeding and young child health through the ending of harmful marketing.[i]

We listened to your 2020 Reith Lectures and found them inspiring and enlightening. Thank you so much for focusing your talents and energies on Climate Change. However, in the discussion after Lecture 1 we were surprised to hear you cite Danone as an example of an ethical company that “‘has totally re-oriented itself and shifted along that continuum towards rebalancing purpose and profit.”

We believe this praise to be unjustified and would like to explain why.

IBFAN has monitored company activity and assisted governments in bringing in regulations before and since the 1981 World Health Assembly adopted the International Code of Marketing of Breastmilk Substitutes. 19 WHA Resolutions have been adopted that clarify and strengthen ambiguous points and address emerging health problems. These resolutions are integral to the Code, have the same legal standing and should be read with it.[ii]  ‘The Code’ is a minimum standard for all countries and is a regulation in a class of its own under human rights law.  States have an obligation to implement it and companies have obligations to comply with it.[iii]

Legal status aside, leading mother and child health experts are agreed that the Code is a critically important safeguard for infant and young child health and survival. It does not prohibit the availability or use of breastmilk substitutes, but protects the rights of all parents and carers to make fully informed decisions, free from commercial influences.

Despite being a late entrant to the baby food market, Danone is now the world’s second largest manufacturer, a status it has achieved through persistent flouting of the Code. Danone leads the baby food industry in its misinterpretation of the Code that ignores most of the WHA Resolutions and its undermining of governments attempts to regulate in the public interest. To date IBFAN’s independent monitoring has been unable to find any sign that Danone is changing its marketing strategy for its ‘Early Life Nutrition’ range (which forms 23% of its business).[iv] Its policy continues to be substantially weaker than the Code in terms of scope, reach, conflicts of interest, promotional claims, donations, gifts and sponsorship. Each weakness undermining sound infant feeding practices and support and risking child health and survival.[v]

Danone’s undermining of breastfeeding, in itself an ecological act, has a negative impact on Green House Gases (GHG), water conservation; bio-diversity, deforestation, waste and pollution.

We would be happy to discuss with you or provide further information if you believe we are mistaken in our assessment. Our concern is only to ensure that information on these matters is fair and correct.

With many thanks for taking the trouble to read this letter and hoping you will take our concerns into account in your important task ahead.

[i] 2020 WHO/UNICEF/IBFAN report on the Code implementation. To date 70% of countries have some legislation based on the Code

[iii] UN CRC General Comment no. 15 and 16 (2013) and UN ECOSOC General Comment no. 24 (2017) in combination with International Court of Justice Judgement of 30 November 2010 concerning Ahmadou Sadio Diallo (Republic of Guinea v. Democratic Republic of Congo). Also see Extraterritorial Obligations and the Code_Feb 2018 Discussion paper, February 2018. The Maastricht Principles on Extraterritorial Obligations of States in the Area of Economic, Social and Cultural Rights and the International Code of Marketing of Breastmilk Substitutes. Independent Review Panel of the UN

Secretary-General’s Global Strategy for Women’s, Children’s and Adolescents’ Health (2016-2030) recommends developing a global human rights framework to address harmful marketing of foods for and to children

[vii] How companies are exploiting COVID19. Some visual examples

[x] Articles and reports relating to Ultra-processed foods   Marketing and Conflicts of Interest in Science of UPFs   Policy responses to ultra-processed foods in global context UPFs, Background, concepts,and scientific evidence How to identify and reduce consumption of UPFs

[xii] BCorps assessment of Danone Early Life Nutrition in China..”The Chinese infant nutrition market holds great growth potential for Danone”. The Access to Nutrition Index (ATNI) claims to be ‘independent from the companies it assesses.’  However ATNI closely collaborates with these companies on the methodology and presentation of its results. Such collaboration is in direct conflict with WHA Resolution 49.15 that calls for monitoring to be “…carried out in a transparent, independent manner, free from commercial influence.” ATNI criteria is also weak in key areas, especially on conflicts of interest. Danone -highlighting its top BMS company status  Danone’s use of ATNI   Danone UK engaging HSG to launch a consumer care line

One thought on “Is Danone a good model to follow? IBFAN questions Dr Mark Carney”