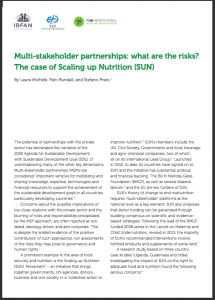 Multi-stakeholder partnerships: what are the risks? The case of Scaling up Nutrition (SUN)

The potential of partnerships with the private sector has dominated the narrative of the 2030 Agenda for Sustainable Development, with Sustainable Development Goal (SDG) 17 overshadowing many of the other key dimensions. Multi-stakeholder partnerships (MSPs) are considered “important vehicles for mobilizing and sharing knowledge, expertise, technologies and financial resources to support the achievement of the sustainable development goals in all countries, particularly developing countries”.(2)
Concerns about the possible implications of too close relations with the private sector and the blurring of roles and responsibilities precipitated by the MSP approach, are often rejected as out-dated, ideology-driven and anti-corporate. This is despite the limited evidence of the positive contribution of such approaches, nor assessments of the risks they may pose to governance and human rights.(3)
A prominent example in the area of food security and nutrition is the Scaling up Nutrition (SUN) ‘Movement’ – an initiative that brings together governments, UN agencies, donors, business and civil society in a “collective action to improve nutrition”.(4) SUN’s members include the UN, Civil Society, Governments and food, beverage and agro-chemical companies, two of which sit on its International Lead Group.(5) Launched in 2010, to date, 61 countries have signed on to SUN and the initiative has substantial political and financial backing. The Bill & Melinda Gates Foundation (BMGF), as well as several bilateral donors 6 and the EU are key funders of SUN.
SUN’s theory of change to end malnutrition requires ‘multi-stakeholder’ platforms at the national level as a key element. SUN also proposes that donor funding can be galvanized through building consensus on scientific and ‘evidence-based’ strategies. Following the lead of the BMGF-funded 2008 series in the Lancet on Maternal and Child Undernutrition, revised in 2013, the majority of SUN’s recommended interventions involve fortified products and supplements of some kind.(7)
A research study based on three country case studies (Uganda, Guatemala and India) investigating the impact of SUN on the right to adequate food and nutrition found the following serious concerns:(8)

1. Restructuring of governance – paving the way for private sector influence

SUN promotes trust in collaborative arrangements with the private sector, opening up policy space
to it with no acknowledgment of the risks.(9) Most SUN countries have no effective mechanisms to address Conflicts of Interest (COI).(10) SUN’s use of the rhetoric of ‘inclusiveness’ relies on the ‘management’ rather than ‘avoidance’ of COI. Its COI tool has many flaws (11)and creates confusion rather than serving the purpose of helping governments avoid COI.(12)

Most countries join SUN with a simple letter of commitment with no requirement for democratic scrutiny of the implications for governance. SUN interventions were found to be ‘top-down’ with civil society represented by a select group of international NGOs, mostly engaged in service delivery, with no recognition of power differentials between and within ‘stakeholder’ groups.
SUN’s international Lead Group includes large transnational corporations and allows them  direct influence over SUN’s policy direction. The Lead Group moreover includes key advocates of technical, private sector- or market-driven solutions to malnutrition, such as the Bill and Melinda Gates Foundation.(13, 14)

3. Lack of external scrutiny and accountability for actions

The monitoring and evaluation processes in SUN consist primarily of internal self-reflections (Joint Assessment Exercises).
Under SUN’s principle of ‘mutual accountability’, members are accountable to one another rather than to communities affected. SUN’s recent Mid-Term Review also acknowledged that “there is a deficit in mutual accountability … In practice, SUN members who are significantly dependent on international assistance are more rigorously assessed than are the funding providers”.(15)
SUN has no complaint mechanisms in place and great emphasis is placed on ‘dialogue’ should problems occur.16 Since SUN acts through governments and its members rather than directly, attribution for its impacts is difficult to establish. Indeed, no-one seems liable for actions promoted under SUN. Accountability towards people affected by SUN interventions is minimal.

SUN’s emphasis on “consensus” and the lack of mechanisms for dispute resolution can stifle dissenting opinions and weaken the drive to frame strategies that address more fundamental problems in food security and nutrition.
SUN focuses on the first 1000 Days of a child (from conception to two years) emphasizing short-term medicalized, product-based interventions for the treatment of undernutrition. Little/no evidence was found that these interventions brought meaningful and long-term changes to the nutrition prospects of those affected by malnutrition, while there was some evidence of negative consequences on indigenous food cultures and confidence in local foods. SUN now claims to address malnutrition in all its forms, however SUN’s emphasis on fortification of single micronutrients and how this can lead to the promotion of ultra-processed foods through misleading claims received hardly any attention.17

5. Support for industrial agriculture rather than structural transformation of food systems

SUN does not address the social, cultural, economic and political determinants of malnutrition and instead emphasizes short-term, technical interventions. The private sector influence at the core of SUN results in initiatives that largely benefit them.
By joining SUN, countries risk foregoing strategies aimed at addressing the root causes of malnutrition such as unequal power relations, social exclusion, exploitation, poverty, discrimination, low wages, land grabbing, and abusive marketing of food products.
SUN contributes to the consolidation of private sector influence on public food and nutrition policies. By shifting policy accountability from the state to multi-stakeholder platforms, the government is reduced to the role of facilitator, rather than the primary actor in addressing malnutrition. This makes it even more difficult for affected groups to hold the state accountable for compliance with its human rights obligations, and moves us further to a charity driven, rather than a rights-based approach to food and nutrition.

HLPE (2018): Multi-stakeholder partnerships to finance and improve food security and nutrition in the framework of the 2030 Agenda. A report by the High Level Panel of Experts on Food Security and Nutrition of the Committee on World Food Security. Rome.
www.fao.org/3/CA0156EN/CA0156en.pdf

Schieck Valente, F. L. (2015): The Corporate Capture of Food and Nutrition Governance: A Threat to Human Rights and Peoples’ Sovereignty. In: Right to Food and Nutrition Watch: Peoples’ Nutrition is not a Business (2015), pp. 15-20.
www.righttofoodandnutrition.org/files/Watch_2015_Article_1_The%20Corporate%20Capture%20of%20Food%20and%20Nutrition%20Governance.pdf

UK Health Forum (2018): Public health and the food and drinks industry: The governance and ethics of interaction. Lessons from research, policy and practice. London: UKHF.
www.idrc.ca/sites/default/files/sp/Documents%20EN/ukhf-casebook-jan18.pdf