Answering a question about Libya at a Tory party conference side event that I attended in 2017, Boris Johnson said it was an incredible country with white sands and great potential that could become a new Dubai. The only thing they would have to do is clear away the dead bodies (No 10 rebukes Boris Johnson over Sirte ‘dead bodies’ comment, 4 October 2017). He got a laugh, of course, but the chair quickly moved on to my question about the need for safeguards in food trade and labelling of baby foods. As far as I’m concerned, this is typical. He’ll say anything as long as it gets a laugh.
Patti Rundall
Baby Milk Action IBFAN UK

Page down for a partial transcript from a side event that  Boris Johnson held during the Tory Party Conference in October 2017  when he was foreign secretary.

At the end of his talk there were a few minutes left for questions. The first question (move to 33.27) was about Libya and Boris said that Serte in Libya could become a new Dubai if only the dead bodies could be cleared  away.  This raised a laugh from his followers but the chair quickly moved on to my question (move to 33.50).
I asked if he remembered a  front page article that he had written when he was a stringer for the Daily Telegraph in Strasbourg. (1) The article highlighted the EU Parliament’s support for an important new EU Directive (2) that forbade companies such as Nestle and Nutricia  from using baby pictures and idealising imagery to promote baby formula exported from the EU to Third Countries.
IBFAN, UNICEF, OXFAM, MEPs and many others have called for EU legislation to include World Health Assembly recommendations for many years  in order to protect child health (3). The Export Directive extended the reach of a previous EU law that applied only to products sold within the internal market (4).  The following extract illustrates Boris Johnson’s selective amnesia when it came to the  intent and importance of the  EU legislation.
Side Event: 3rd October 2017, Tory Party Conference,  (Gobal Britain, Building a Prosperous Trading Nation)

PR: Thanks very much. My name is Patti Rundall,  from an organisation called Baby Milk Action

Boris J: Baby Milk Action Group – I talked to you 25 years ago
PR – yes – when you were trying to dish the dirt on Europe. You found something that was actually very good that Europe was doing, if you remember  – really good labelling on baby food products  that were harming health. You were dumbfounded –  and as we had nobody to our press conference  and you were the only one in the bar …[Laughter]    You did  a front page on us. But listen.

BJ: Very nice of to see you
PR  I wish I could say the same for you. But the point is – you mentioned Codex and  trade. This is something I know something about and have been doing for 20 years.  You have to know what you are talking about  when you are doing trade deals and when you are protecting health – especially when you come into food..  If  you’re  going to be doing deals with corporates who are running circles round governments and everyone – you will not get the good safeguards that you know you need. You must put money to into having independent safeguards to see that foods are safe and that they are actually what people need …
Chair: Can you come to your question?
PR: Oh well – the question is – what are you going to do about that – outside the EU?   I’m not taking a point on Brexit…
BJ:  Absolutely  ……You made a very convincing case to me then and, as far as  I recall, the issue was that ….and where you and I saw eye to eye –  the issue was that the milk ..there was an SMP mountain – milk powder mountain. which was being produced I think very largely by Dutch firms –
PR: Swiss firms..
BJ: herds not firms ….and I think what was happening was –  I believe – was that  the Commission –  in its desire to unload this stuff on markets – was encouraging  the use of baby milk  or
PR: No it was trying to stop baby pictures and idealising  – and you agreed with that –   it was something good that the EU was doing and you were dumbfounded because you were  to ..
BJ: OK, OK a bit of amnesia on my part on that aspect of it. Let me… on  your point about Codex and high standards  – I just want to repeat what I said as I said earlier on… there’s no part of our agenda to lower standards – it’s no part of our agenda to lower standards [nor is it]  part of our agenda to foist baby milk that mothers don’t want … families don’t want …on consumers… We want to maintain very, very high levels of protection and we will work with Baby Milk Action group to ensure that we do that. 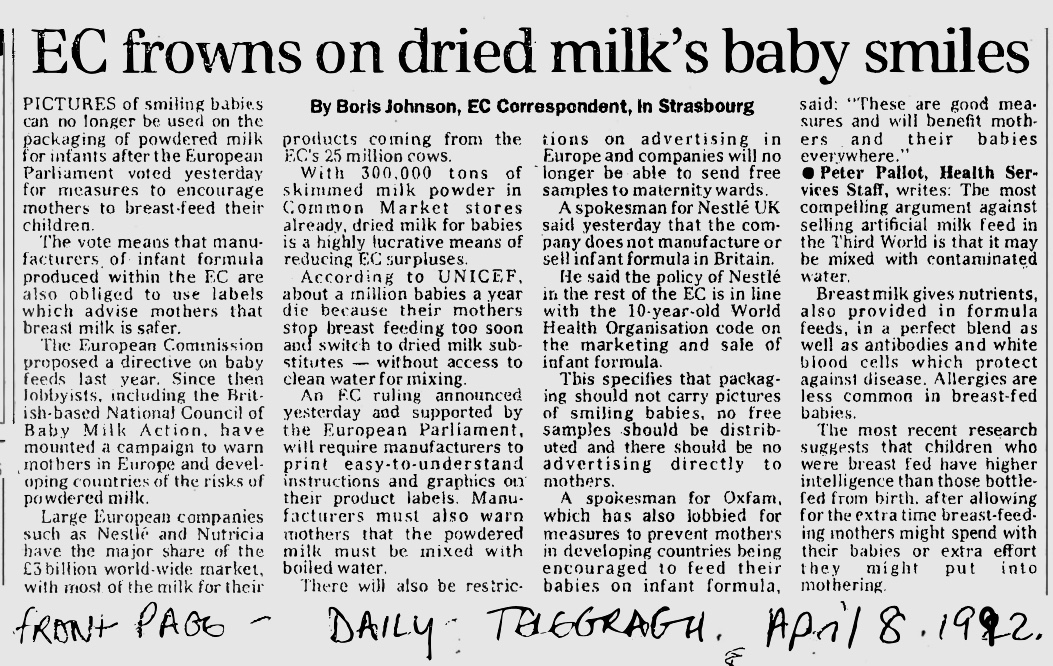 See updated Policy Blog on the risks of  ‘No Deal’  for child health.
(1) Daily Telegraph, in April 8, 1992. “EC frowns on dried baby milk smiles.”
(2) COUNCIL DIRECTIVE 92/52/EEC  of 18 June 1992  on infant formulae and follow-on formulae intended for export to third countries (Export Dir 92.52.doc). “Whereas in order to prevent inappropriate use of these products which could prejudice the health of infants it is also desirable to extend the application of the Community rules on labelling of infant formulae and follow-on formulae to those products intended for export to third countries..”
(3) The International Code of Marketing of Breastmilk Substitutes (1981) and subsequent relevant World Health Assembly Resolutions.
(4) COMMISSION DIRECTIVE (91/321/EEC)  of 14 May 1991 on infant formulae and follow-on formulae (91 directive pdf)
Tagged on: EU    Food Safety    Trade rules