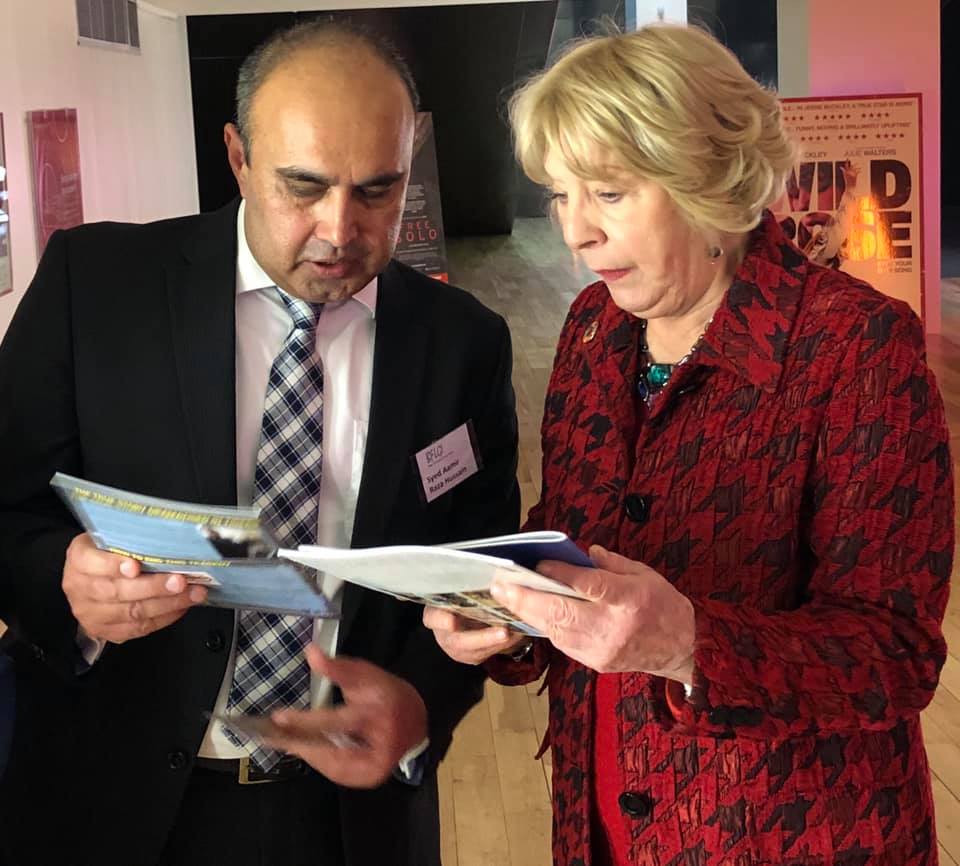 Aamir shows Mrs Sabina Higgins, Ireland’s First Lady, the evidence of malpractice that caused him to resign from Nestlé.

The Last word with Matt Cooper

Jen Hogan @mama_tude
Last night’s screening of the #TigersMovie & the panel discussion that followed was quite simply incredible. This is a movie more people need to see. Unethical practices in the area of babymilk promotion is something that we all need to be aware of. @sraamir15 you’re a hero!

Tigers is based on the true story of a former Nestlé baby milk salesman in Pakistan called Syed Aamir Raza (played in the film by major Bollywood star Emraan Hashmi) who took on the industry with the help of Baby Milk Action and IBFAN (the International Baby Food Action Network) when he realised that babies were dying as a result of his work pressuring doctors to promote formula.

A central theme of Tigers is the inappropriate sponsorship of the health care professionals and how this can influence the advice and support parents receive.

The Baby Feeding Law Group (BFLG) was set up in the UK in 1997 following the adoption of the first of 8 World Health Assembly Resolutions to call for Conflicts of Interest safeguards in child health (1). BFLG Ireland was formed in 2017.

Since 1997 over 20 leading health professional and civil society organisations have worked together in an effort to bring UK and EU legislation on the marketing and safety of formulas and baby foods into line with WHA requirements (2). Over the years legislation has been strengthened – although it still fails to meet the minimum needed, especially in relation to look-alike formulas for older babies. These products are nutritionally inferior and often high in sugar, but are aggressively and misleadingly marketed – fuelling the obesity epidemic. Most BFLG members, such as the Royal College of Midwives and the Community Practitioners and Health Visitors’ Association, now have strong Conflict of Interest policies.

In the last few months the British Medical Journal (3) and the Royal College of Paediatrics have decided to stop taking formula company adverts and funding . C4’s Despatches – The Great Formula Milk Scandal also tackled this subject.

(1) The1996 WHA Resolution  (49.15) states: “Concerned that health institutions and ministries may be subject to subtle pressure to accept, inappropriately, financial or other support for professional training in infant and child health”…urged Member States:….(2) to ensure that the financial support for professionals working in infant and young child health does not create conflicts of interest, especially with regard to the WHO/UNICEF Baby Friendly Hospital Initiative;

(3) Calling time on formula milk adverts.  BMJ 18 March 2019: The British Medical Journal (BMJ) and its sister journals will no longer carry adverts for breastmilk substitutes. The ban will apply to advertisements in The BMJ and other BMJ journals, including Gut, Frontline Gastroenterology, and Archives of Diseases in Childhood, as soon as possible. The BMJ says:  “We have chosen a complete ban because previous attempts to implement a due diligence approach have failed. This will have a substantial effect on our revenues—a loss of an estimated £300 000 (€350 000; $400 000) in 2020. The ban on product advertising is not a boycott of the companies themselves. We will honour existing contracts for formula milk advertising, but the final advert will appear later this year. We are not alone in doing this: in February the RCPCH announced it would no longer accept funding from formula milk companies at a loss of £40 000 a year through event sponsorship and advertising.”

(4) EU Legislation and Global trade Although, as mentioned above, EU legislation on baby food marketing fails to meet WHO marketing requirements,  in terms of food safety, its Precautionary Principle and the EU charter of Fundamental Rights are stronger than many. This is important especially when it comes to trade, where food and agri-business interests dominate.  World Trade Organisation (WTO) rules in comparison are essentially the lowest common denominator for trade in the 21st Century.

At Codex meetings where global trading standards are set,  it is often a fight to ensure that standards protect human health.  Baby Milk Action – IBFAN UK  has attended Codex nutrition meetings every year since 1995 in order to strengthen Codex standards and bring them into line with WHO recommendations.

Baby foods and the new threat of Anti-Microbial Resistance (AMR) are current hot topics on the Codex agenda. The EU phased out the routine use of antibiotic growth promoters between 1997 & 2006. If the UK leaves the EU – it is not clear if it would support the adoption of strict Codex standards or follow the US and others who fail to put human health first. Without effective action at national and global level, common infections and minor injuries – the kinds of things we have been able to treat for decades – will emerge as killers once more.