Broadening its donor base and non-state actors – Does WHO really have a choice when it comes to financing? 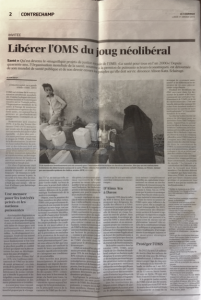 The Royal College of Paediatrics and Child Health has said that it has suspended “future funding agreements” with the infant formula milk industry while it conducts a review.

The decision came after growing pressure from doctors and campaigners who have been calling for the college to sever its ties with the industry, saying that such relations are incompatible with the healthy promotion of breastfeeding, especially in low and middle income countries, which are vulnerable to predatory advertising.

The BMJ recently reported that 12 organisations and 84 individuals, mostly clinicians, had accused the college of acting against WHO’s code on marketing breastmilk substitutes and associated World Health Assembly resolutions, at a conference the college held in Cairo on 29 January.1 Conference sponsors included Nutricia, Danone, and Nestlé, all of which make formula milk products.

The WHO rules state that breastmilk substitutes and infant formula manufacturers “should not . . . …