The Royal College of Paediatrics has been accused of breaching World Health Organization guidance after it accepted sponsorship funding from baby formula companies.

More than 100 medics and 13 health groups have written to the Royal College of Paediatrics and Child Health (RCPCH), urging it to drop Nestlé, Nutricia and Danone from the list of sponsors for its first international conference, to be held in Cairo on 29 January.

The letter, to the RCPCH president, Russell Viner, strongly condemns the decision to let baby milk companies sponsor the event, “particularly one taking place in a low- or middle-income country, which is the market most vulnerable to predatory advertising”.

Marketing by formula companies is a particular concern in poorer countries due to the higher risk of babies suffering from pneumonia and diarrhoea, and because the difficulty of accessing healthcare means mothers often have less information about the benefits of breastfeeding.

“If they are taking on, as one of their ‘great sponsors’, members of the breastmilk substitute industry, then they are seeing the financial benefits as being more important than the principled issue of protecting, supporting and promoting breastfeeding,” said Nigel Rollins, a professor at the WHO’s department of maternal, newborn, child and adolescent health, who signed the letter in his personal capacity as a member of the RCPCH.

Since 1981, the WHO has maintained a strict code on the marketing of baby milk substitutes. In 2016, a World Health Assembly resolution recommended that donations from baby food companies to professional associations should not be allowed.

The RCPCH maintains that because this resolution, though welcomed by the World Health Assembly, was not adopted as part of the WHO code, the sponsorship is legitimate. But critics have accused the RCPCH of not abiding by the spirit of internationally agreed standards.

The WHO and the International Paediatric Association are surveying paediatric associations globally to assess the scale of such industry sponsorships.

“These things have a ripple effect and the college accepting sponsorship from the baby-milk substitute industry serves to endorse and normalise breastmilk substitute as the default infant feeding recommendation and practice, at least in the UK,” said Rollins.

Last year, a joint investigation by the Guardian and Save the Children found that in some of the most deprived areas of the Philippines, Nestlé was offering doctors, midwives and local health workers free trips to lavish conferences, meals, tickets to shows and the cinema and even gambling chips, earning their loyalty. This is a clear violation of Philippine law.

No legal action was taken against Nestlé in the Philippines, which has repeatedly rejected the allegation that it does not comply with legal obligations in the country. In a statement, it said: “We follow clear processes and procedures in compliance with the Philippine Milk Code (EO51), and we deny allegations that we offered doctors, midwives and health workers incentives to promote products covered by the code.’’

Patti Rundall, policy director of Baby Milk Action, said the RCPCH should be taking a leading role in calling for tighter controls. “Throughout the decades all the work we’ve done in the EU to bring in decent legislation has been done with the help of paediatricians,” she said. “They’re going backwards.

“The market for these products has completely boomed,” added Rundall, who said parents needed to be given the right information so that they were fully informed.

Research by Save the Children found that six of the major baby milk companies spend £5bn annually on global marketing. In 2014, global sales of all baby milk formula were about £32bn; by 2019, the market value is projected to reach £50bn. 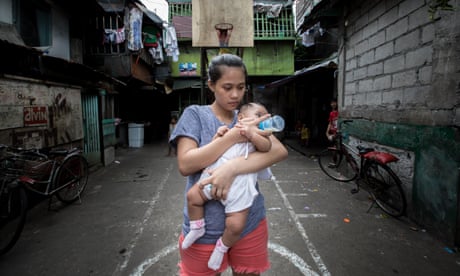 It is estimated that 823,000 child deaths would be prevented each year in low- and middle-income countries if breastfeeding were adopted almost universally. Currently, only 40% of children younger than six months are exclusively breastfed in these countries.

The RCPCH said in a statement that its engagement with formula milk companies is undertaken only under “strict due diligence arrangements which ensure that any funding received is independent of any educational activity, that declarations of interest of speakers are clearly published, and that exhibitor activity is separated from the scientific meeting and concerns only specialist milks”.

The statement added: “There will be no involvement by the funder in the selection of topics, choice of speakers, programme content, or spend of funds.”

Abbott Nutrition, which has not completed RCPCH’s due diligence process, is not a sponsor, it said, adding that that the inclusion of its logo on the conference’s website was an error.

Nestlé added that it has a global commitment to support breastfeeding and that it “complies with the WHO code and WHA resolutions as implemented by national governments everywhere in the world, as a minimum”.

It said that its sponsorship of RCPCH’s conference “does not breach the WHO code”, adding, “Local regulations in Egypt also do not prohibit infant formula companies from sponsoring medical conferences.”

Danone said in a statement: “We are proud to meet the stringent requirements of the RCPCH due diligence process that allows us to support their education events.

“Danone does not advertise or promote infant formula for children aged nought to six months, anywhere in the world, even if permitted by local laws. In addition, compliant with the FTSE4Good Breast Milk Substitutes Criteria for countries classified as higher risk, we have voluntarily extended our policy to 12 months of age, which may go beyond local legislation. In these higher risk countries, Danone also prohibits the promotion of complementary foods and drinks for use by infants up to six months. We follow local legislation whenever stricter than our policy.’’

It added that its presence at the RCPCH conference is “respectful of the WHO code”.