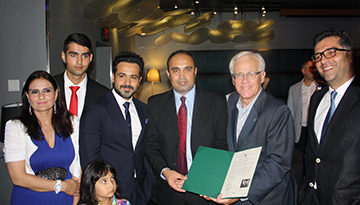 FOR IMMEDIATE RELEASE
Mississauga-Erindale MP Bob Dechert’s attends international premiere of the film “Tigers”
Toronto, Ontario – Bob Dechert, Parliamentary Secretary to the Minister of Justice and Member of Parliament for Mississauga-Erindale was honoured to join with Mississauga resident Syed Aamir Raza for the international premiere of the film “Tigers” at the Toronto International Film Festival (TIFF). Tigers depicts Mr. Raza’s courageous life story in Pakistan and his journey to Canada after exposing the unethical business practices of his former employer that may have contributed to the deaths of many children in Pakistan.
“Mr. Raza’s story of courage and personal sacrifice to expose an injustice demonstrates values that all Canadians share.  We are proud that Mr. Raza and his family have chosen to become members of the Canadian family like so many newcomers before them.  We congratulate Mr. Raza and his family for inspiring the making of this remarkable film and thank TIFF for choosing to show the film at this year’s festival.  I encourage all residents of Mississauga and all Canadians to see this film.” Said MP Dechert
MP Dechert attended the international premiere of this important and powerful film on behalf of the Government of Canada where he brought greetings from the Hon. Jason Kenney Minister of Employment & Social Development &  Minister for Multiculturalism. Minister Kenney said “ The account of Mr. Raza’s principled stand in defense of the health of babies and their families is one that deserves to be told, and one which reflects the best of Canadian values. People of Pakistani descent like Mr. Raza have long brought their stories and experiences with them to Canada, and their sharing of them helps to strengthen our society.”
Mr. Raza is portrayed in the film by the famous Indian actor Emraan Hashmi. The film was directed by the Oscar winning Bosnian director Danis Tanovic. Mr. Raza currently lives in Mississauga with his wife and family after coming to Canada as refugees due to the threats and persecution he faced resulting from from his brave actions to save the lives of Pakistani children.
– 30 –
For further information contact:
Michael Crase
Office of Bob Dechert, MP
Office:(905) 897-1952