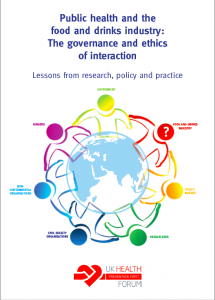 Lessons from interactions between public health and the food and drinks industry
This new report from the UK Health Forum contains experiences from a dozen Public Private Partnerships and Multi-Stakeholder (MSH) arrangements in Nutrition that focus on voluntary self-regulated initiatives.
The examples provide a wealth of information that is extremely useful. 10 of the case studies show no evidence of any benefit and multiple risks.  One of the remaining two is not really relevant. The other is an uncritical piece written by the founders of that initiative.
Sadly some of the conclusions in a Lancet blog  suggest that some of the problems with MSH arrangements could be ‘mitigated’ by addressing ‘actor imbalances’ Surely  it would be much safer to  challenge the MSH model fundamentally.
Governments and UN agencies are under increasing pressure to enter MSH arrangements almost as evidence that they take NCDs and nutrition seriously.  Because the risks are insufficiently flagged up, corporations (or those who represent their interests) are being given  ‘governance’ and ‘advisory’ roles. (for an example see WHO’s new High Level Commission on NCDs where  Arnaud Bernaert from the  World Economic Forum has been granted an ‘advisory role’.)
I  doubt whether adding more strong public health advocates to the MSH mix is the answer – it may even create even more risks. After all:
One thing that seems clear to me and evidenced by this paper – MSH platforms slow down rather than speed up effective action on nutrition.
I’ve sat on on the European Commission’s Platform for Action on Diet Physical Activity and Health along with a range of experienced  NGOs for over 10 years. The Platform is a Commission initiative – not a PPP  –  whose effectiveness depends on voluntary commitments. Over the years we have all seen the good ideas repeatedly questioned and countered by the food, drink and advertising industries whose aim has always been, and still is, to divert attention from their bad practice, reposition themselves as key partners in public health and, most importantly, to delay effective regulatory action.   Platform meetings have now been reduced from 4 to 2 per year –  a clear sign of disenchantment – although I expect that few will dare say this out loud.
UKHAN18
ons-between-public-health-and-food-and-drinks-industry
Further thoughts:
IBFAN is concerned about WHO’s efforts to tackle conflicts of interest in nutrition programmes –because in many respects they are blurring the COI concept and this may  have grave consequences.

Why IBFAN is so concerned about WHO’s redefining of Conflicts of Interest. (Thanks to Lida Lhotska)
A key problem is that WHO has attempted to redefine traditional legal CoI concepts in order to fit the ‘stakeholderisation’ of our public nutrition and health. WHO’s Tools for Safeguarding against possible Conflicts of Interest  in Nutrition Programmes and its Framework for Engagement with Non State Actors (FENSA) both follow the problematic CoI Guidance that was devised for the Scaling Up Nutritioninitiative (SUN), as does WHO’s 13th Global Plan of Work. While on a superficial level, all these documents appear to address conflicts of interest, they contain weaknesses that instead promote inappropriate relationships /partnerships with the Private Sector.
One confusing aspect of all these documents is that they keep referring to conflicts being BETWEEN entities – rather than WITHIN a person or an entity. The fact is COI can arise WITHIN people, governments or any institution BECAUSE of inappropriate interactions with the private sector.
Para 44 of the Global Strategy on Infant and Young Child feeding tries to prevent inappropriate interactions by assigning to companies TWO roles and TWO roles only: 1: to make safe products and 2: to comply with the Code and WHA resolutions. Companies could make a positive contribution to child health by focusing on doing these two things well.  We all fall into a trap and make things more problematic when we give them other roles or more responsibilities such as education or breastfeeding promotion.  (CLICK HERE  for one example – Nestlé new Breastfeeding Campaign )
Worse still, when we invite them into policy-making spheres.
So while WHO’s CoI Guidance/tools contain some interesting and important information, they are not adequate safeguards against CoI or other forms of undue influence – safeguards that we need at national level to protect policy making and programme implementation. They may in fact undermine any existing safeguards.  It is not helpful to ask governments to follow a CoI guidance that will not prevent entanglements and instead increases risks of CoI (and institutional corruption) at national level.