This is an important new document issued by the European ‘College’ –  EU Institutions, bodies, offices and Agencies and the European Commission.

This is a complicated paper that could be important, not just for countries that follow EU rules,  but also others. Sponsorship policies are often weak on FSMPS  (see RCPCH Due Diligence)  and companies are keen that FSMP are not covered by marketing restrictions.   This ’Notice’  attempts to tighten things up, acknowledging  – delicately – that the ‘misclassification’ of FSMP may ’negatively affect the protection of consumers interest.

Para 51 Following a similar logic, given that the use of the product under medical supervision is a characterising element of FSMP, a product that can be used without medical supervision, in the context of the dietary management of a patient, should not be considered as FSMP

Helen Crawley (First Steps Nutrition Trust)  and I submitted comments (some of which have been taken on Board)  and were invited as ad hoc members to a working group of  the Advisory Group on the Food Chain, Animal and Plant Health  last year. The notice seems to give Member States the right to refuse (on risk to health grounds)  permission for a  product to be classified as an FSMP in their jurisdictions – even if another Member State allows it. It does not address the Regulations (2016/128) that will come into force in 2021 and bring FSMP marketing rules into line with those for  infant formula (no health and nutrition claims etc)  Loopholes will still remain, including advertising to the general public in  ‘publications specialising in baby care and scientific publications’  (Member states can prohibit such advertising)

IBFAN and the Baby Feeding Law Group have been calling for stricter FSMP controls for decades – since before the Commission Directive 1999/21/EC was passed.   In 2000, with the support of over 900 NGOs, we objected to the adoption of the FSMP Directive.  Our monitoring demonstrated that companies use FSMP label to push free samples and supplies, even  into Baby Friendly Hospitals. (See Feeding Fiasco from 1998).

The European Parliament and many Member States have also been concerned and in  June 2013  REGULATION (EU) No 609/2013 was adopted.  This regulation called for: ● tighter controls on follow-on milks ● no baby pictures and idealising text ● stricter controls on foods claiming to be ‘for special medical purposes’ (FSMPs) ● increased transparency, ● the use of the Precautionary Principle ● more democratic oversight ● MEP reviews of new ingredients. 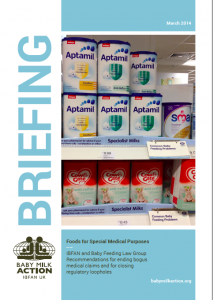 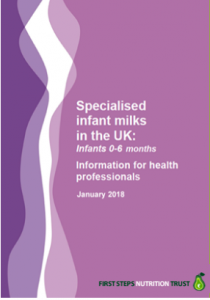 FSMPs are necessary products for infants who have metabolic disorders where breastfeeding is contraindicated or where full or partial feeding with specialised formulas is needed. The majority of sick babies need breastfeeding or donor human milk.   However they are fed, all babies and especially sick babies, need the protection of the International Code of Marketing of Breastmilk Substitutes and the subsequent relevant WHA Resolutions. (IC). FSMPs are often the sole food for children at a vulnerable stage of growth and development when the energy and nutrient intake per kilo bodyweight is greater. Their manufacturing and marketing requires more – not less – care.

Para 2.Over the past years, Member States’ national competent authorities have reported increasing difficulties with the enforcement of the legislative framework applicable to FSMP. Member States’ experts have in particular flagged that an increasing number of products are placed on the market as FSMP in their territory, but that doubts arise in certain cases as to whether the products really correspond to the definition of FSMP and therefore correctly fall within the scope of the FSMP legislation.

Para 4. Irrespective of the underlying reasons for the food business operators’ decision, the misclassification of FSMP can result in differences in the enforcement of EU law from one Member State to another and may negatively affect the protection of consumers’ interest, the free circulation of goods in the EU and fair competition among food business operators.”