How Big Business Got Brazil Hooked on Junk Food 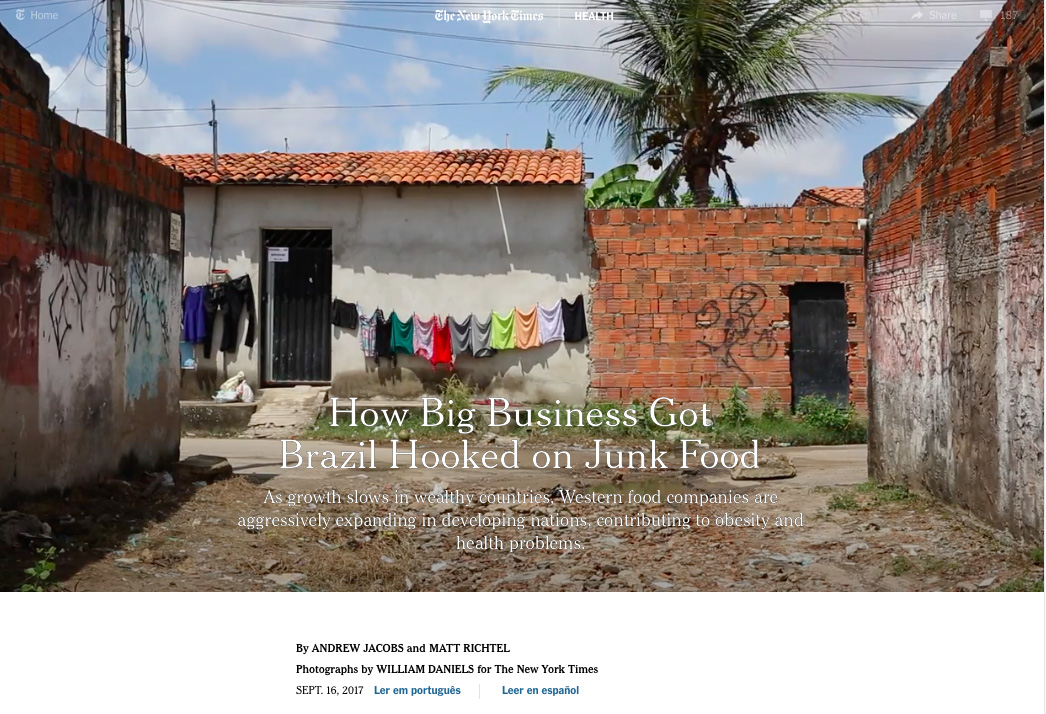 FORTALEZA, Brazil — Children’s squeals rang through the muggy morning air as a woman pushed a gleaming white cart along pitted, trash-strewn streets. She was making deliveries to some of the poorest households in this seaside city, bringing pudding, cookies and other packaged foods to the customers on her sales route.  CLICK HERE for more

Nestlé and the end of the Brabeck Era

The tactics used by the food industry to influence public policy have been well documented, but there is little direct evidence of the rationale behind food industry actions and their level of support from within individual companies. This paper provides an analysis of an email exchange (from 2015) between former senior executives of Coca-Cola to gain insider insight into ways in which the food industry seeks to influence policy-makers as well as scientific evidence and opinion with respect to nutrition and noncommunicable disease (NCD) prevention. The results provide direct evidence that senior leaders in the food industry advocate for a deliberate and coordinated approach to influencing scientific evidence and expert opinion. The paper reveals industry strategies to use external organisations, including scientific bodies and medical associations, as tools to overcome the global scientific and regulatory challenges they face. This evidence highlights thedeliberate approach used by the food industry to influence public policy and opinion in their favour. It also demonstrates the importance of identifying and managing potential conflicts of interest when assessing the evidence base and when making policy decisions related to nutrition and NCD prevention.

What’s happened to the word ‘independent’?

Derek Yach –  ex WHO, ex Senior Vice President,  Global Health and Agriculture Policy at PepsiCo  – ex-Rockefeller – is now President-Designate of a new Philip Morris Foundation, Foundation for a Smoke-Free World. The Foundation’s website is interesting and shows how the word ‘independent’ has become almost meaningless.  Beginning in 2018, the Foundation will receive approximately US$80 million annually over the next 12 years from Philip Morris International (PMI), but claims that  PMI and the tobacco industry will apparently have  no influence over how the Foundation spends its funds or focuses its activities. Indeed the Foundation claims that  independence and transparency are its core principles, that it has an independent research agenda, independent governance, ownership of its data, freedom to publish, and protection against conflict of interest. Furthermore, strict rules of engagement will be put into place to ensure any interactions with the tobacco industry are fully transparent and publicly reported.

For an excellent critique of this Foundation from the WHO Framework Convention on Tobacco Control  CLICK HERE http://www.who.int/fctc/mediacentre/statement/secretariat-statement-launch-foundation-for-a-smoke-free-world/en/

Meanwhile Nestle in August continued to confuse everyone by muscling in on breastfeeding initiatives, such as the annual  World Breastfeeding Week – in a clear attempt to divert attention from the harmful marketing that does so much to undermine breastfeeding. Nestlé refuses to take notice of the many  World Health Assembly Resolutions that call for safeguards to prevent such on Conflicts of Interest.

Nestlé backs breastfeeding drive in China as government vows to hit 50% target by 2020 By Gary Scattergood+, 02-Aug-2017  Nestlé in China is backing government drives to increase breastfeeding by holding a number of public events to coincide with World Breastfeeding Week.