Protecting breastfeeding from commercial in influence

BFLG press release 28 June 2017 (National Breastfeeding Celebration Week in England began on 26th June)
The Julie Crawford Award for Breastfeeding Support for 2017 has been won by Bernadette (Bernie) Wood, a Health Visitor from Suffolk County Council’s Children’s and Young Peoples Services. She was presented the Award today on behalf of the Baby Feeding Law Group (BFLG) by Allan Cadzow, Service Director for Children and Young People at the CYP Health ‘Looking to the Future’ Conference’. Read Bernie’s acceptance speech. 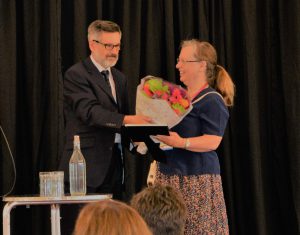 Bernie has supported countless families over the years and her work has had a demonstrable and significant impact on the improvement of breastfeeding rates in the region. She has also campaigned against the predatory activities of formula companies, writing to HV practice journals such as ‘Community Practitioner’, urging them to refuse advertising revenue from such companies. By educating and sharing her knowledge she has done much to ensure that staff and centres are in compliance with the recommendations of the World Health Assembly that parents and carers receive independent support and advice free from commercial influence. (1)
Bernie was proposed by two colleagues, Annabelle Mackenzie, Infant Feeding Coordinator and Carolyn Le May, HV, who describe her as one of life’s ‘very active participants’ who uses her personal resources to full capacity in her drive to support families to reach their breastfeeding goals, to help educate colleagues and teams and to reduce commercial influence throughout the health sector. Obi Amadi, Lead Professional O cer, UNITE/CPHVA, one of the judges, described her as “an exceptional and very deserving candidate.”
The Julie Crawford Award for Breastfeeding Support is an award given by the Baby Feeding Law Group (BFLG), a coalition of leading health professional and lay organisations, set up in 1997, to monitor and campaign to bring UK and EU legislation in line with World Health Assembly Resolutions.
Background: Julie Crawford was a health visitor and former Director of Baby Milk Action who died in 2001 from a rare disease at the age of 42. She cared passionately about breastfeeding and was never frightened to stand up and fight for the rights of mothers to independent and sensitive care. She was especially concerned about the extent of industry funding of education for health professionals and was also keen to push for legal action in defence of mother’s rights to breastfeed. The judges for 2017 were Obi Amadi, HC, Sarah Saunby, breastfeeding counsellor and Patti Rundall, OBE, Policy Director, Baby Milk Action.
– END –
For more information: Patti Rundall: 07786 523493