My name is Camille Selleger and I speak on behalf of the International Baby Food Action Network (IBFAN), recognized as an essential partner by WHO, UNICEF and the UN. In this venue, many people already know us; I hope that our concern and legitimate request will be treated seriously. On behalf of our network, I would like to welcome you in your new role which is critical when it comes to child health.

Last year, the Lancet explained that breastfeeding could save an additional 800,000 babies’ lives annually if rates would increase. In addition, breastfeeding significantly reduces the risks of allergies, obesity, infections and malnutrition, and improves IQ.

According to the international standards adopted to protect breastfeeding from commercial pressures, including the UN Convention on the Rights of the Child, Nestlé is required to comply with the International Code of Marketing of Breastmilk Substitutes and subsequent resolutions in all countries of the world, irrespective of their national legislation on this matter.

However, Nestlé’s policy does not respect all of the Code’s provisions nor does it applies in all countries. While Nestlé’s inclusion in FTSE4Good is cited in your new report, we must stress that the criteria established by FTSE4Good make a distinction between countries based on the risk of infant mortality and malnutrition – a distinction that is not legitimate in the light of the recommendations of the World Health Organization.

In addition, FTSE4Good looks to the companies’ policies, not to their compliance to the Code. Nestlé continues to violate the Code on a regular and systematic basis, including in those countries that you define as higher-risk countries, such as India, Mexico, Indonesia, Thailand, Bosnia, among others. These violations are described in the IBFAN report Breaking the Rules, recognized as a reliable source of information by WHO, and justify that we maintain our boycott of Nestlé’s products.

Mr. Schneider, you represent a real change of generation within Nestlé and you want to reinforce your image as a company which supports good nutrition and optimal health: what is your action plan to align Nestlé’s policies and practices with the Code in all countries, in full and without distinction?

In a short response Mr. Shneider mentioned his own young child and stressed the quality of Nestlé baby feeding products, which are used to feed millions of babies. Ms. Selleger responded to point out he had failed to address the question about how Nestlé markets the products and the widespread criticism of its breaches of marketing standards.

Subsequently, Christine Renaudin spoke from the floor about a trip Nestlé had sent her on to Uganda after she had defended Nestlé at an earlier shareholder meeting. While explaining that she had seen babies who had to be fed on formula, she also failed to address the fact that Nestlé aggressively markets the products in breach of international marketing standards.

IBFAN is not anti-formula and works to improve formula safety. Nestlé fails to warn on labels in most countries that powdered formula is not sterile and how to constitute it to ensure any intrinsic contamination with bacteria is killed (using water above 70 deg. C), as set out in WHO guidance.

A quick check of the online store of a Ugandan supermarket today shows that Uganda is one of the countries where Nestlé NAN formula labels carry a “protect” logo, which break the International Code. Click here for a sheet of similar examples from around the world raised at previous shareholder meetings. 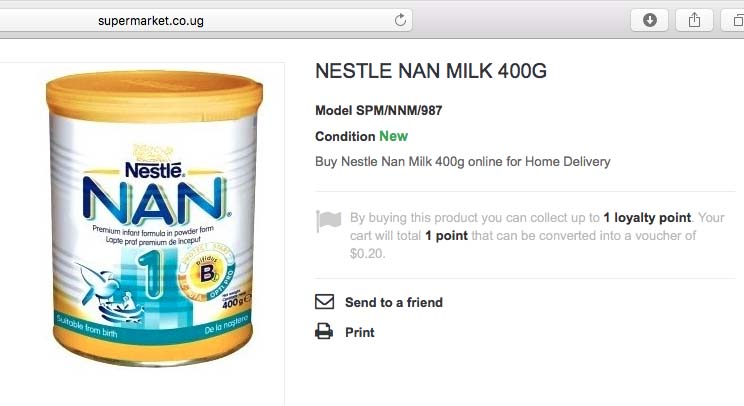 Formula does not provide the same protection as breastfeeding and it is misleading to market NAN with the claim it will protect babies.

IBFAN monitors what companies are actually doing around the world.