Campaigners in the Philippines are exposing a threat levelled at the economy by Nestlé and other transnational companies if baby milk marketing regulations successfully defended in 2007 are not scrapped. Nestlé and its partners are pushing for a new, weak law to be introduced, which will allow them to advertise milks for use from 6 months of age (with the same branding as milks for use from birth) and target mothers directly. The companies have the Department of Trade and Industry lobbying legislators on their behalf, while the Department of Health, WHO and UNICEF have said in joint statement that the draft bill: “aims to support multinational companies while damaging the Filipino society: families, the mothers and children.”

Regulations successfully defended in 2007 when challenged by the pharmaceutical industry at the Supreme Court regulate the promotion of foods for infants and young children up to three years of age as health officials attempt to prevent thousands of unnecessary deaths occurring every year. Other countries such as Brazil (where breastfeeding rates have increased markedly since a low in the 1970s) have introduced similar regulations in implementing marketing standards adopted by the World Health Assembly in 1981.

A petition on the Avaaz site has already gained thousands of signatures and been reported in the Philippines.

The Department of Trade and Industry (DTI), however, has publicly stated as it lobbies on the industry’s behalf that if the draft bill is not passed by Congress: “The proposed  ban on advertising for milk products jeopardizes multinationals’ plan to invest $400 million”.

Campaigners have already pointed out that elections for congress take place in 2013 and they have been hearing politicians warned that investment in their constituencies will be cancelled if they do not back the bill. 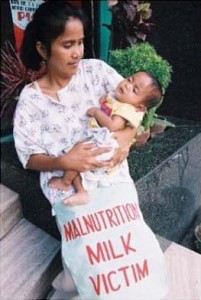 Nestlé has formed the Infant & Pediatric Nutrition Association of the Philippines with formula companies Abbott Laboratories, Fonterra Brands, Mead Johnson Nutrition and Wyeth to lobby against the existing marketing requirements – yet Nestlé and other companies cite anti-trust regulations when called on to mutually agree to stop violations of the international minimum standards adopted by the World Health Assembly. (Nestlé announced on 1 December 2012 that it had completed its acquisition of Wyeth from Pfizer, though this was blocked by competition authorities in Mexico).

[Left: Gloria joined the successful 2007 campaign to defend the baby milk marketing regulations – or Milk Code – after realising she had been duped by company advertising when her son Miguel became ill – instead of being protected by formula and having his IQ boosted. Photo copyright Baby Milk Action]

In a clear admission that Nestlé’s monster bill is about selling infant formula, the DTI wrote to Members of Congress in October stating:

“The benefits derived from the performance of the infant formula industry in terms of government revenues and employment opportunities cannot be overemphasized. The proposed restrictions may impact on the sector which employs a substantial number of Filipino workers.”

This includes community health workers employed by Nestlé who have been found to promote infant formula door-to-door in the past. Company representatives visit health facilities distributing gifts and sponsoring health worker social events, such as choirs and trips to the beach. In 2007 UNICEF released a film called “Formula for Disaster” showing the reality of formula promotion in the Philippines and how parents are being misled into believing their children will be more intelligent if they are fed on formula rather than breastfed. Click here to watch it online or order a DVD from Baby Milk Action and organise a film and campaigning night.

The promotion is not always specifically for infant formula, but for milks for older children, often with the same branding as the infant formula. In their latest joint statement the Department of Health, WHO and UNICEF comment:

“An estimated 8,400 lives could be saved every year if every Philippine family with infants and small children would practice optimal breastfeeding.” 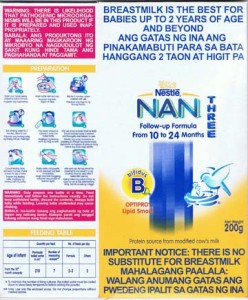 The existing regulations – known as the Milk Code – implement the International Code of Marketing of Breastmilk Substitutes and subsequent, relevant Resolutions of the World Health Assembly. The industry falsely claims these measures only cover products up to 6 months of age, but they cover all breastmilk substitutes and breastfeeding is recommended into the second year of life and beyond. Various provisions relate to infant and young children, defined as children up to three years of age, the age covered by the existing regulations in the Philippines, and other countries, such as Brazil. These were opposed by legal action at the Supreme Court in 2007, which rejected the call to strike them down, stating in its ruling:

“The framers of the constitution were well aware that trade must be subjected to some form of regulation for the public good. Public interest must be upheld over business interests.”

The US Chamber of Commerce directly lobbied the President of the Philippines in 2007, threatening investment by US companies if the Milk Code stood. An international campaign of solidarity effectively neutralised the threat then.

[Above: Clear warnings are required on Nestlé Nan formula under the 2007 Regulations. If Nestlé’s bill is passed, these will go, the labels will not have to be translated into Filipino and Nestlé will be able to advertise the products and directly target pregnant women and mothers].

“It is quite simply disgusting that Nestlé and its colleagues are using economic blackmail against the Philippines in an attempt to force members of congress to accept a bill that the Department of Health, WHO and UNICEF have clearly stated will be damaging to Filipino society. The industry’s boast of how sales of infant formula contribute to government revenues should be offset against the needless death and suffering – and cost to the economy – that occurs through infants and small children not being breastfed. The Supreme Court was very clear in 2007 that trade must be subjected to some form of regulation for the public good, but that cuts no ice with Nestlé Chairman, Peter Brabeck-Letmathé, who cares more about Nestlé profits. Nestlé only stops harmful marketing practices when forced to by law or through pressure from boycott supporters. Not for nothing is Nestlé one of the four most boycotted companies on the planet. Aside from the boycott call, I don’t think I could eat a Nestlé product without gagging, knowing what this company is doing in the Philippines and elsewhere.” 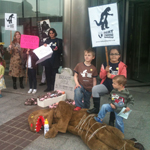 In the 1990s Nestlé threatened to close down all operations in Zimbabwe if it implemented the International Code and Resolutions in legislation. The Minister of Health at the time, Dr Timothy Stamps, labelled this as “economic blackmail” and an “idle threat”. The law was introduced. Click here.

It was reported in September 2012 by Reuters that Nestlé has set up an intelligence centre to monitor billions of discussions on the internet wherever its name or interests are mentioned. Mike Brady said:

“Turn the screens red at Nestlé’s intelligence centre by spreading the word about its unacceptable economic blackmail of the Philippines to persuade it to reconsider. Sign Baby Milk Action’s petition of solidarity with the Philippines so people in the Philippines know the world is with them as they take on the Nestlé monster.”

[Above: Children in the UK took on the Nestlé monster at a demonstration at Nestlé (UK) HQ on 19 May 2012. Photo copyright Baby Milk Action].