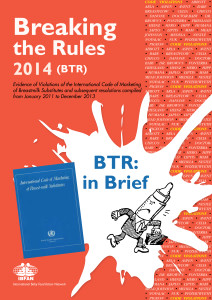 ‘I can say that over 90% of your allegations they comply with our policies as the Chairman has already explained.’

This confirms that Nestlé policies and practices need to change to bring them into line with the Code and Resolutions. These include labelling of infant formula with the claims it ‘protects’ babies and is the ‘gentle start’.

Marking 150 years of Nestlé malpractice in 2016

Nestlé is celebrating its 150th anniversary in 2016. But this should also be a time of rememberance and repentance. In company mythology, Henri Nestlé saved the life of a neighbour’s child through a flour, sugar and milk concoction, which he sold as farine lactée. This was soon being marketed around the world with the claim it prevents diarrhoea and vomiting. The assault on breastfeeding cultures began.

In 1905 Nestlé merged with the Anglo-Swiss Condensed Milk Company. This was marketed as “ideal for delicate infants”, leading to rickets, blindness and death. Dr Cicely Williams was moved to give a talk entitled Milk and Murder to the Rotary Club in Singapore in 1939, where the President of Nestlé was chair. Neither farine lactée nor condensed milk are suitable for infant feeding and many babies will have died during this period through not being breastfed. Though it is not mentioned in the celebrations, subsequent Nestlé executives have admitted some practices were inappropriate. But for Nestlé malpractice is always historic; it will only apologise for today’s practices in the decades to come.

We ran a campaign on Twitter with messages posted to the anniversary hashtag #150nestle and took some of the messages with us to the shareholder meeting on 7 April 2016. We displayed posters with them where shareholder buses arrived.

Inside the meeting we asked shareholders to observe a minutes silence for the babies that had died, but this was immediately interrupted by Mr Brabeck, and some shareholders who booed.

See our press release for further details and links to the texts of interventions by Baby Milk Action and IBFAN-GIFA.

Call for Methodist Church CFB to be transparent

The Church Central Finance Board (CFB) holds a million pound investment in Nestlé. Despite this conflict of interest it sits on the Expert Committee for the FTSE4Good ethical investment index, which it says can ultimately, ‘recommend inclusion or expulsion from the Index.’

The Committee advised on weakening the criteria in 2010 to look to company policies rather than the Code and Resolutions. The Methodist Conference in June 2015 received a report on Nestlé from the Joint Advisory Committee on the Ethics in Investment (JACEI). This was prompted by the Lancashire Diocese asking the year before for greater transparency on what the investment had achieved. The JACEI report explains the CFB encouraged Nestlé to apply to join FTSE4Good and that Nestlé weakened its policies prior to doing so, knowing it would be assessed against these rather than the World Health Assembly marketing requirements.

Prior to joining FTSE4Good Nestlé said it would not advertise brands used for infant formula. Now it advertises them widely, using them on milks for use from one year of age. Hence, the overall impact of the CFB engagement through the investment has been to weaken Nestlé policies.

Despite this, the report recommends continuing with the £1 million investment, so profiting directly from these more aggressive practices.

Read our letter to the Chair of JACEI in advance of the 2016 Methodist Conference here.