Baby Milk Action and  IBFAN are supporting the campaign for a new Treaty to hold corporations accountable for their Human Rights abuses.   Baby Milk Action’s Policy Director, Patti Rundall, was in Geneva with IBFAN’s Geneva-based group, GIFA, FIAN other NGOs working this and on the evening before Thursday’s vote at the Human Rights Council, joined the rally  through the Geneva UN district. Because of the favourable Tax System in Switzerland,  many corporations have their HQs in Geneva.(see picture above)

IBFAN has worked for many years to monitor food corporations and for binding regulations at national and international level. The success of this first phase  could be an important turning point.

Sadly, No Thanks to the US and several EU countries including the  UK, who voted against the Resolution.

The Press Release below from the Treaty Alliance of over 610 NGOs and movements  in 95 countries explains more. 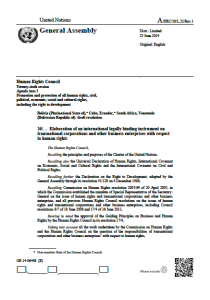 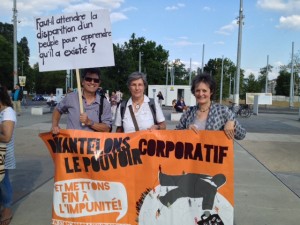 Yesterday, a resolution* was adopted in the UN Human Rights Council that will begin the process of elaborating an international legally binding instrument on business and human rights. Despite strong opposition from the EU and US, the resolution received affirmative votes from 20 member States on the Human Rights Council, while 13 States abstained.

This victory in the promotion of human rights is welcomed by the Treaty Alliance, a group of networks and campaign organizations collectively working to organise advocacy in support of developing binding international regulation to address corporate human rights abuses. A statement calling for an international legally binding instrument has been signed by 610 civil society organizations and social movements and 400 individuals from 95 countries. Additionally, the Subcommittee on Human Rights of the European Parliament and the Vatican have made statements supporting the creation of such an instrument.

This adoption will result in the establishment of an open-ended intergovernmental working group that will have the mandate of elaborating a binding instrument to regulate the activities of Transnational Corporations (TNCs) and Other Business Enterprises. Some States opposing the resolution made attempts to come to a compromise, but were not willing to provide a concrete path towards the drafting of a binding instrument to prevent human rights abuses by TNCs and other business enterprises and allow for the provision of remedy to victims.

Members of the Treaty Alliance emphasize that the establishment of a binding instrument is complementary to the implementation of the Guiding Principles and necessary to ensure glaring gaps in protection are addressed. Notably, an intergovernmental process will also contribute to addressing current imbalances under international law, particularly in light of protections companies can obtain under Bilateral Investment Treaties and Free Trade Agreements, which have allowed corporations to sue States.

While the US and EU have repeatedly stated that they will not participate in the intergovernmental open-ended working group established by the resolution, the Treaty Alliance hopes for their involvement in this process that will be critical to ensuring effective protection of human rights in the context of business activities

*Officially entitled “Elaboration of an international legally binding instrument on Transnational Corporations and other Business Enterprises with respect to Human Rights” (A/HRC/26/L.22) the resolution was adopted on 26 June at the 26th session of the HRC.